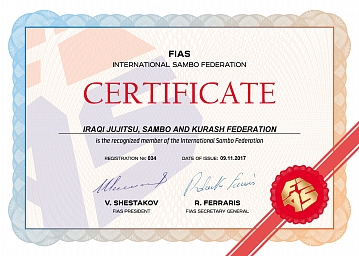 History of SAMBO in Iraq
Sambo has appeared in Iraq and in appreciation to Dr.Mokhles Al A-Iraqi in 2009, and the organization that ran the Sambo in those days , was Sambo Iraq Sports Committee.


Sambo begins to develop in Al-shabab Sport club  and then gradually moving to the regions. At the same time it should be noted that Sambo Iraq Sports Committee operates within Iraq Federation of Ju Jitsu Martial arts and kurash  associated disciplines, and after the split of this federation Sambo Iraq Sports Association decides to work With more than 700 athletes
And 30 coaches 50 sport clubs.as well as we have contracted with expert coach from Uzbekistan in order to train the Iraqi national team

The pioneers of Sambo in Iraq were Dr.Mokhles Al.Iraqi and Hussein Al.farttosi with the team coaches Rabih Jalal,Thaer Jawad, Haider Hassan and Falah Hasan . They  spent much of life living in Iraq , Baghdad and training under its founder . The men independently work on two different styles, which eventually cross-pollinated and became what is known as Sambo. Compared to  judo-based system, which called "Freestyle Wrestling", style was softer and less strength dependent.