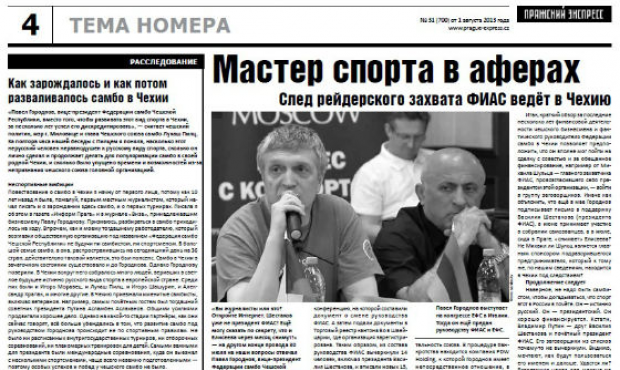 An attempt to illegally takeover the International SAMBO Federation remains a hot topic among the journalists all over the world. New details of the scandal about the conduction of a research-to-practice conference, suddenly transforming into an alleged FIAS Congress, as well as the role of vice-president of SAMBO Federation of Czech Republic in this shady undertaking-all this and much more in the most popular Russian newspaper in Czech Republic The Prague Express.

Master of sports in shady games

Illegal takeover of FIAS is tracking back to Czech Republic

“Are you, guys, journalists or not? Open the Internet! Shestakov is no longer the president of FIAS! Moreover I can tell you in secret that Eliseev will be removed from the post in a month!” – that was what Pavel Gorodnov, vice-president of SAMBO Federation of Czech Republic, answered to our questions on the telephone on July 30. In a few minutes he called us back himself. saying “You may as well take a newspaper of your major competitor The Inform Prague, open the last page and read that European Union SAMBO Championship will take place in Prague from September 20 to 22.”

Once upon a time in Switzerland

It is worthy of note that we addressed the issue of SAMBO in Czech Republic exactly after the announcement in The Inform Prague newspaper about European Union SAMBO Championship in September. Such unexpected in recent years revival of activities of SAMBO Federation of Czech Republic couldn’t but caught the eye. Even though Pavel Gorodnov is now vice president of the federation (official president is Ladislav Kogout. – author’s note), in reality he remains to be its chief manager. He is the one who takes decisions, of course.

It turned out that both the revival of activities and such a high level of awareness when it comes to modern management of International SAMBO Federation (FIAS) and European SAMBO Federation (EFS) were no coincidence. Literally a week ago we found out that a group of 15 persons, former members of the executive boards of organizations and chief managers of national teams, had conducted some kind of research-to-practice conference in Malaysia in June, where they had drawn up a document about the change of FIAS management. After that they submitted the document to the Swiss Trade Register of the Cantone Vaud where the organization is registered. As a result 14 members of the FIAS Executive board disappeared from the list, including president Vasiliy Shestakov. 15 new members appeared on the list, including “Czech” Pavel Gorodnov. A shady undertaking worked out only because one of the main conspirers was a former FIAS General Secretary Nikolay Lents, who was dismissed from the post in March 2013, but kept the signatory right.

It happened on June 18. Only a month later the management bodies learned about a trivial illegal takeover of the organization. Right after it there appeared an official alert message at FIAS home-page due to the illegal change of FIAS Management Bodies and appeal not to conclude any financial deals with the “new” management for the time being.

We got in touch with the FIAS legal department to be told that the lawyers had already been to Prague and had prepared the documents for Police there, relative to the case of Pavel Gorodnov. A criminal investigation will be opened against him in Russia as well (because Gorodnov is the citizen of the Russian Federation). Or rather against all the conspirers.

To tell you the truth, we were not surprised to see the Gorodnov among those who tried to do the illegal takeover. It is commonly known in Prague that once a wealthy businessman had seen better days. An investigation about his Credit Union lasted several years. The national bank of the Czech Republic found multiple violations, took away the license and put its activity under restraint. PDW Holding company is in the bankruptcy process, Gorodnov bears a direct relation to it. Share in the PDW Group company, where he is a founder and his ex-wife is a director, is pledged as security. By the way, exactly with this PDW Group company Gorodnov went to Belorussia two years ago in order to bring the Belorussian aviation back to life. As a result the whole city of Vitebsk was fooled. Then Gorodnov moved quickly to Sumi and nearly became the chief deputy of the Sumi airport, yet the Sumi journalists managed to stop another shady undertaking of him.

At the beginning of 2013 Pavel Gorodnov anchored in the Czech Republic again. He changed all the team of his newspaper The Inform Prague and began to run it. A month ago there appeared an announcement on the door at the address Lípová 20/1444, Praha 2, saying that the newspaper office was closed due to technical difficulties. His multiple companies, as well as the SAMBO Federation of the Czech Republic are registered at the same address. And he, himself, is registered to be residing there as a physical entity. We were informed that the premises, former belonging to Gorodnov, are seized for debts.

According to the Czech Trade Register, literally on a recent day – on July 17, Pavel Gorodnov registered a new company called RA Aircraft Group, s.r.o. with him as a sole proprietor. Let us remember the name of the company. Perhaps, it will crop up in a new story of a shady financial undertaking very soon.

Thus, a brief review of financial activities of the Czech businessman and actual chief manager of SAMBO Federation of Czech Republic in recent years makes us suggest that he could easily come to terms with his conscience and enter the group of conspirers for money, promised to be given to him by, let us say, Michael Shultz – the main person in the takeover of FIAS, who declared himself president of the organization. What are other explanations for the fact that Gorodnov signed the letter in support of Vasiliy Shestakov (FIAS president) earlier in May and took part in the meeting of the self-appointed leaders in June and being in Prague in July “removes Eliseev from the post”? Is Michael Shultz indeed the main sponsor of the businessman with nearly depleted pockets, who is moreover under a remand in Czech Republic, according to our information?

There is no need to be a SAMBO athlete to know that this kind of sport is in favor in Russia. It is truly Russian, it is presidential. It is financed well. By the way, Vladimir Putin is a friend of Vasiliy Shestakov and FIAS Honoured President. He was not red-penciled from the list by the conspirers. Perhaps, they dream of using his name later on. Will they manage to do it or not? Let’s meet at SAMBO Championship in Prague in two months. Gorodnov invites us all there. And we’ll see whose side will win.