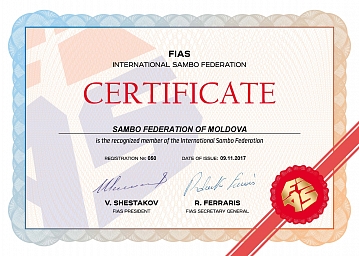 First time Moldova met with Sambo in 1950 thanks to a student of the Moscow Institute of Physical Education, Master of Sports of the USSR Alexander Yezhov who arrived to Chisinau for practice. A year later under the leadership of great Sambo propagandist Michael Vlikovanenko first sports Sambo section was created.

In 1952 graduates of the Moscow Institute of Physical Culture Vasily Blagodarov and Yefim Papadopoulos were sent to Moldova. In 1953, the championship was held in Chisinau. The first champions were A. Doga, E. Papadopoulos, P. Gergen, V. Berezin, A. Smirnov, A. Shapavalov, N. Zaitsev.