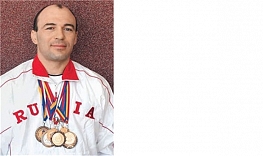 Fact: reached a qualifying standard for a master of sports at 17, at 22 won his first European champion title, at 24 became the world champion. His signature techniques include a knee lever and the so-called "strigunok" – an undercut with a fall and the foot support in the stomach. Also studied at the music school learning to play a traditional Russian instrument, bayan.

"A sambist can run a marathon, can beat any football player, can perform acrobatics. They are unique athletes and it is a unique sport."

Having completed the sports career Sergey Lopovok has remained in sambo. He is the head coach of the sambo school in Kstovo, a deputy of the city council, the chairman of the sports club "Sambo."