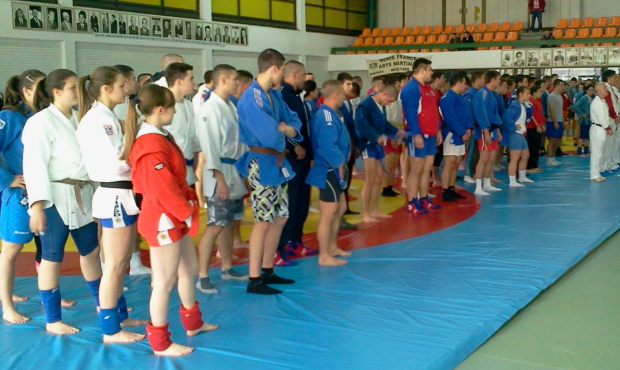 The first Serb who was introduced to Sambo was Svetozar Mihajlovic back in 1961, during the three-month study in Vladivostok. He became the first Sambo coach in the country, and later was the first president of Yugoslavia’s Sambo Federation. In the 70’s, some judo sportsmen started learning about Sambo, and in 1969 judo master Stanko Topolcnik won the first European bronze medal in Sambo, and a growing number of judo team members appeared at Sambo international competitions in 1974. But at that time Sambo clubs still did not exist.

The first serious encounter with Sambo judo sportsmen from Yugoslavia had at international competitions and seminars, which were held at the beginning of the 80’s in Bulgaria. The former coach of the judo club Timok Zajecar Nikola Diskovic with several associates arranged with Bulgarian colleagues an international tournament, held on April 9th 1986 in Zajecar. Although experienced Bulgarians won the first competition in Serbia, many Judo clubs decided to train sambo. With Diskovic, a significant role in the early days of Sambo in Serbia had Boban Boskovic, Aca Todorovic, Zoran Jovanovic, Goran Mitic and many others.

Already in the 80’s Serbian Sambo sportsmen regularly participate in international Sambo competitions. On the 17th European Championship in June 1987 in Sofia, President of the World Sambo Federation (FIAS), Fernando Conte has accepted an application for membership of Yugoslavia in this international organization. At this competition participated Zoran Jovanovic in +100 kg category and won eighth place, and the main initiator of the Sambo in Serbia Nikola Diskovic has judged and participated in the work of the Executive Committee of FIAS. In the following years several Sambo competitors have achieved outstanding results in international competitions in Sambo: Branislav Vuckovic won fifth place in the category up to 90 kg at the European Championship in England and 9th place at the World Championships in Italy in 1990, Goran Mitic won 8th place at the World Championships in 1987 in the category up to 57 kilograms, Dejan Marinkovic won third place at the World Championships in 1987 for juniors in the category up to 100 kg.

After the outbreak of the war and the breakup of the former Yugoslavia, Sambo remained active only in Serbia. The most credit for it was then-president sambo team and coach of Yugoslavia Nikola Diskovic. In February 1991 was held in Zajecar seminar for referees, coaches and doctors, who was led by Diskovic and attended by sixty participants from Russia, Greece, Bulgaria, Romania and Serbia. This event laid the groundwork for subsequent Balkan Sambo Cup and the establishment of Balkan Sambo Federation.

During those years begins intensive development of Sambo in Serbia. From 1994 to present Serbia won 200 medals at the European and World Championships and Championships among youth and juniors, and 53 medals in major international competitions.

Currently in Serbia there are 18 Sambo clubs. Aware that the survival and further development of Sambo depends primarily on working with youth, this aspect of the Sambo Federation of Serbia is the most important. Numerous seminars, camps, educational meetings and the annual championship in Serbia are organized involving a large number of competitors from all clubs. The last big event was held a month ago - on April 17 this year. The constant development, a number of results and continuity guarantee that Sambo in Serbia in the coming years will further grow.