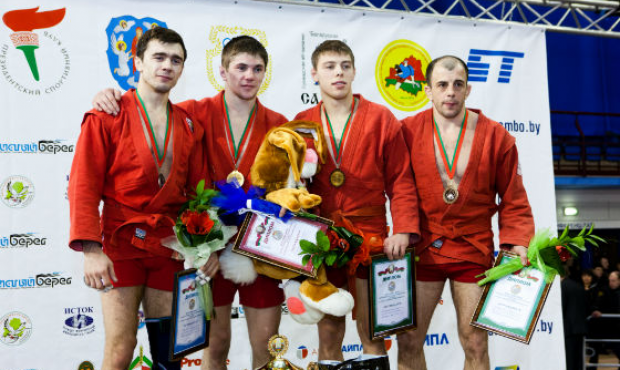 Lack of parking space near Minsk Palace of Sports, difficulties in choosing among tournaments for teams from different countries and a wish to do our best at home. This was the World Cup stage, XVII Open SAMBO Championship of Belarus among men for the prizes of the President of Belarus and it became the first major international tournament of the year in Europe. FIAS site found out who hadn’t managed to get better after injury during the World Championship 2012, for whom family union working together at competitions is a common thing and how SAMBO can end up at Sochi Winter Olympics.

How to skip work to watch SAMBO?

Small cozy parking lot in front of Minsk Palace of Sports was constructed when it was very hard to purchase a car even when the necessary sum was on hand. That is why it doesn’t have enough room even for the third of the cars of the spectators who come to major tournaments at the sports complex. This is what happened during the World SAMBO Championship in November 2012 and during the World Cup stage in February 2013.

Belarusian spectators, just like 3 months ago, despite the snowy weather made their way with joy and excitement to the bleachers of Minsk Palace of Sports to enjoy SAMBO performed by Masters from different countries and, of course, to cheer for their countrymen. And this is despite the fact that the finals took place at 5 pm during working days which is not a very suitable time for working people. But skipping work for a couple of hours was worth it: the tournament that was held in Belarus for the 17th time and has had the name of the World Cup stage for 5 years has very rich traditions. Local SAMBO fans know them very well. 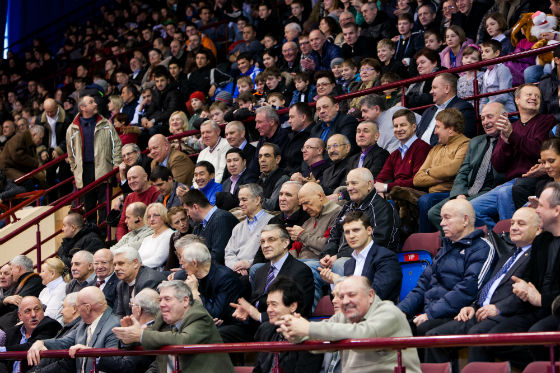 There was no problem with the number of spectators at the bleachers but as far as the number of participants is concerned there turned out to be fewer of them than it could have been. The explanation to this is simple as the dates of the tournament had been changed. The organisers noted that there had been the whole range of reasons why they had to change the dates of the World Cup stage in Minsk. In connection thereto not all teams managed to make necessary arrangements and had to set priorities when choosing between internal competitions and the tournament in Minsk. As a result, there were representatives from 10 countries at the Minsk tournament. As it seemed from aside the easiest choice was made by Rumen Stoylov, the representative of the Bulgarian SAMBO Federation.

– For 7 years I have come to Minsk at least one time a year. Moreover, this is the major competition of the sports year in Europe and our team couldn’t but come, said he during an interview with journalists. 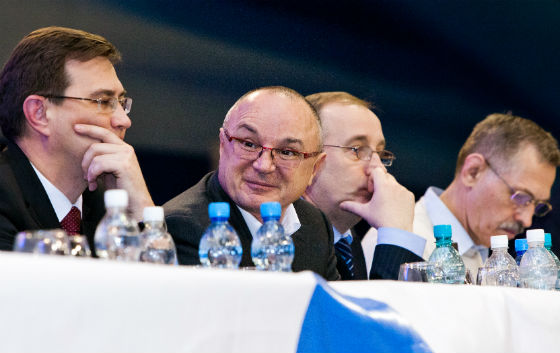 The tournament is also very important to the hosts who made some kind of “beauty parade” for the Belarusian sportsmen who both members of the national team and contenders to get to the team.

– For our team it is a competition during which we can look at the guys – what condition each of them is in. And at the same time we want to prove that we are the best when we are at home. And to choose SAMBO wrestlers for the upcoming World and European Championships, said Vyacheslav Kot, the Head Coach of Belarusian national team. – We have an opportunity to see the first string wrestling as well as to see our reserves. If at this stage something doesn’t work well for them we will look for the reasons and will try to change the situation for better. 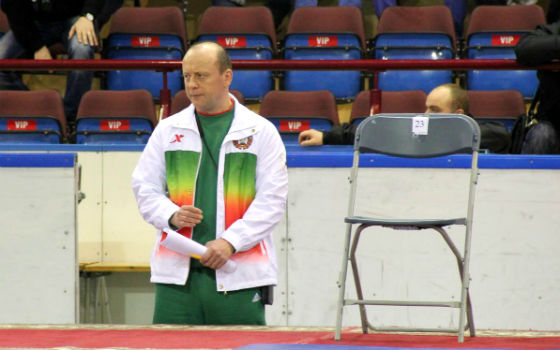 We also decided to watch Belarusian SAMBO wrestlers carefully together with their coaches. As a result we managed to find several main wrestles. The first final wrestle revoked in our memory the events that had taken place three months before when a Belarusian sportsman, Andrey Kurlypo, and a Russian sportsman, Igor Beglerov, were to wrestle during the finals. But they didn’t get a chance to wrestle with each other because of the serious injury that had been caused during the preliminary wrestles. A 43-year old veteran of the Belarusian team was prohibited to perform by doctors and, thus, automatically he got only silver during the World Championship.

At that time he could fight and faced his young opponent Beymbet Kanzhanov from Kazakhstan with dignity. But despite his efforts in the finals he again managed to take only the second place. 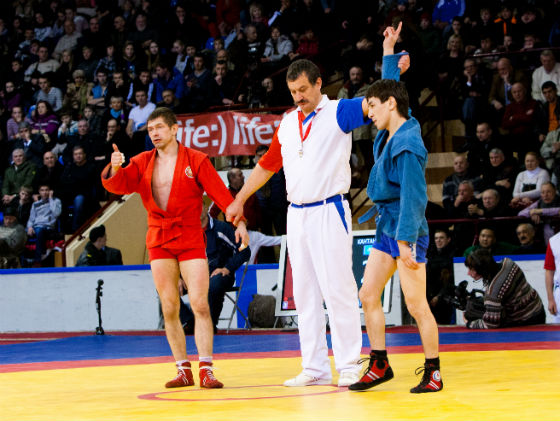 – Earlier I used to be number one all the time but after the injury at the last year’s World Championship I hadn’t managed to recover, – commented Andrey Kurlypo the end of the fight with sadness in his voice. Running ahead of the story we would like to note that as a result this SAMBO wrestler was awarded with a special price “For Will to Win” for his performance.

– I think that first of all I managed to win because of the speed, retold the finals opponent of the Belarusian sportsman Beymbet Kanzhanov during his interview with journalists. – We have walked a long way to this tournament but we are not going to stop now, we will keep on going forward. I am planning to come to Minsk next year.

The loss of the injured veteran of the Belarusian team in the finals has certain grounding but the loss of experienced Yury Rybak during his fight with his young and impudent countryman Alexandr Vahovyak was an unexpected surprise to the majority of spectators. We decided not to question the tired multiple World champion about the reasons of the loss. We assumed that was the moment when youth outran experience. 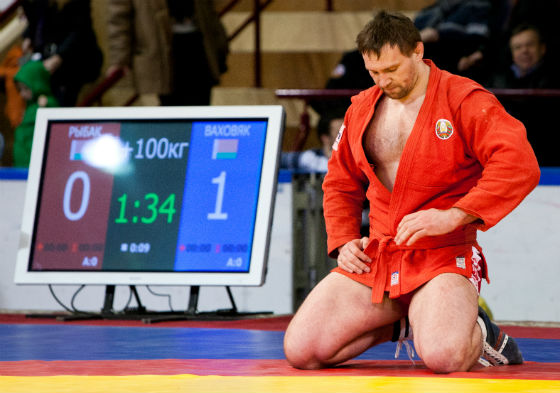 Famous Belarusian and Azerbaijanian sportsman and coach Natik Bagirov announced several times that he had left elite sport. But his presence at the majority of major international starts says the opposite. Natik Nadirovich couldn’t stay away from The World Cup stage in Minsk either. Traditionally, having become the most emotional spectator during the preliminary wrestles, he (traditionally, as well) moved to the commentary room to accompany the Director of local TV when it came to the finals. 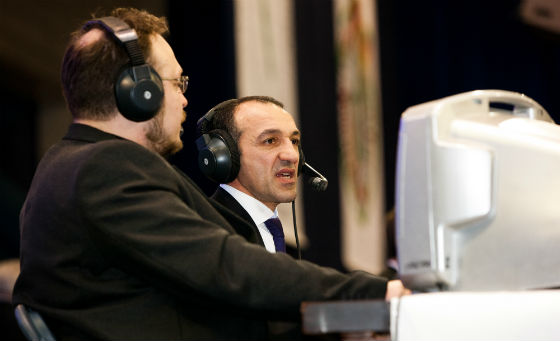 But one of the main fights remained without his expert opinion to TV viewers. As father and as a personal coach he just couldn’t remain still when his son Arif Bagirov stepped on the mat. Having shot off, Bagirov Sr. immediately appeared close to the fight and kept on giving hints to his son. As a result, Arif won and got the medal and the cup from his father’s hands. 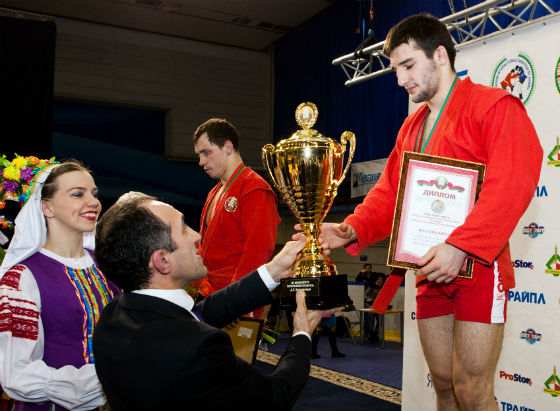 – My father's hints did help, they always do, said the tired and content but very calm winner. – I always try to listen to him as he gives important advice. Everybody knows that my father is very emotional when cheering and hinting. By the way, when losses happen, post-fight analysis at home is very emotional as well. But today is a different case and tomorrow I am heading for the training before major international judo tournament.

SAMBO and judo are close-knit together

– Judo and SAMBO Federations have become close-knit in our country: SAMBO wrestles perform in judo, judo wrestlers – in SAMBO. We have to make our Olympic team stronger, – explained Vladimir Yaprintsev. – Of course, we can transfer all SAMBO wrestlers into judo but we are not sure that it will be positive for judo and as for SAMBO, it will definitely be harmed. That is why today we are for competition and cooperation between these sports. 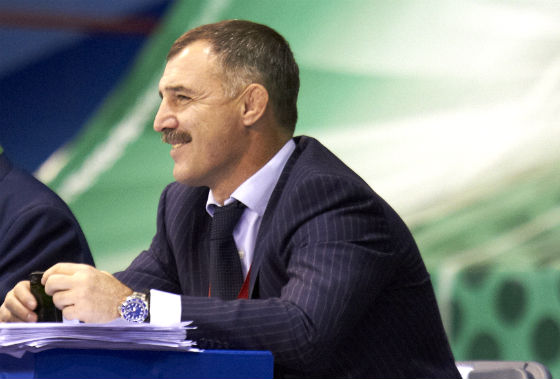 The Chairman of the Belarusian Federation is sure that SAMBO will keep on developing and will keep on brining joy to existing fans and attracting new ones.

– After the World SAMBO Championship hosted by us more interest to this combat sport has evoked in Belarus. And the number of kids in sports department has always been large. SAMBO has always been and remains sport with certain romantic glamour, noted Vladimir Yaprintsev.

– Maybe it sounds a little bit odd but we would like to take part in Sochi Winter Olympics – as a demonstrative sport – so that everybody can see and evaluate us, he added.