7 facts you should know about the 23rd British SAMBO Open 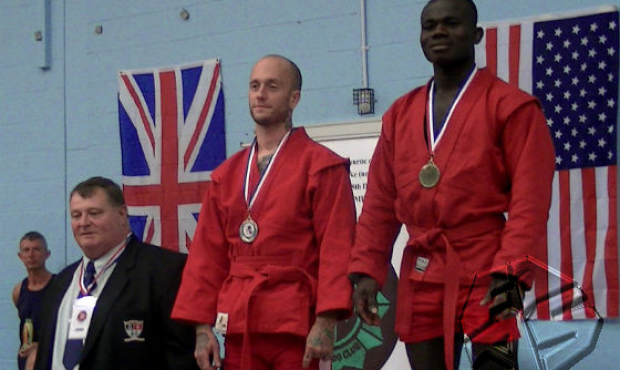 On the last day of June in Bedford the 23rd British Open in Sports and Combat SAMBO was held. This traditional rating tournament was qualifying for the World Championship in St. Petersburg. All the clubs and associations that are included in the British SAMBO Federation or national federations – FIAS members – managed to participate in the open competitions. We present our interesting facts about the British Open, which are a gauge of the importance of this event.

Fact 1. The tournament has a tradition

To understand the significance of the British SAMBO Open it’s enough to have a close look at two numbers. The first – is the serial number of the tournament, which is held for the 23rd time. Not many competitions can boast such a long history. And the second – is the number of participants in 2013. According to the British SAMBO Federation, more than 250 SAMBO athletes from different countries gathered in Bedford to compete for the title of the best in different age groups and weight categories.

Fact 2. An ideal place for the tournament

English Bedford is as if specially designed to hold large-scale competitions. The city is located in close proximity to major highways and also near the international Luton Airport. An important component is also the fact that Bedford has many hotels with affordable prices to house the athletes. And the tournament takes place in the already won fame Bedford Grappling Academy, headed by Russell Dodds – a man who made a great contribution to the organization and carrying out of 2013 British SAMBO Open.

Of course, the majority of the athletes competing at the XXIII British Open SAMBO were the British. However, representatives of Bulgaria, Ghana, Latvia and Lithuania also participated in the tournament. They didn’t have to go to the competitions from afar, because they have been living in the UK long ago. But the American Sambo Association team covered a considerable distance to take part in the British Championship, growing authority from year to year. And it is worth noting that the American SAMBO athletes were not “tourists” in Bedford, having managed to win some medals.

The British Open began with competitions among children, for many of whom this SAMBO tournament was the first in their life. All the guys who came to SAMBO mat practiced judo earlier. But now they have come to the conclusion that SAMBO rules allow to reveal themselves and demonstrate their skills much better. Therefore it’s more pleasant to fight in SAMBO. Seeing the huge interest in SAMBO on the part of the younger generation, the British Open organizers decide to dedicate a day for junior competitions in the future or give them special mats of smaller size – so that they can approve themselves.

SAMBO competitions among women were held, by tradition, vividly and emotionally. Girls in sports are always famous for their own unpredictability. However, despite the demonstrated quality of women’s SAMBO, representatives of the local federation are talking about the need to increase its quantity. “We want more British girls and women to come in SAMBO and practice this wonderful sport. Of course, today we have seen high level fights, but we’d like to see more of them, and for this we need to increase the number of female SAMBO athletes”, – said Martin Clark, the founding father of the British SAMBO Federation.

By far, the most spectacular were duel meets between men in Sports SAMBO. 20-year-old Jamie Marzetti’s way to his third consecutive title of the winner of the British Open Championship turned out to be not easy. From all appearances, this athlete especially likes to pick up his opponent and throw on the mat, thereby earning a lot of points and leading the audience in ecstasy.

Principal rivalry also took place at the tournament. Namesakes Danny Carrot and Danny Roberts have a rich history of confrontation in which Roberts has still had an absolute advantage. So this time a lot of people expected his victory over the well-known opponent in the finals. However Carrot managed to prepare well for the fight and won a victory over previously seemingly invincible opponent in the face-to-face opposition.

Super heavyweight Michael Hutchinson won two gold medals at the tournament. First, he became a champion in the Sports SAMBO and then also proved his superiority in Combat. Probably, it is possible to recognize him as the hero of the day. The Bulgarian Georgy Georgiev and Lithuanian Winnie Dragon deserve specific words. Having won gold medals in a brilliant style, they made many local SAMBO fans about the possibility for these SAMBO athletes to get British passports and perform for the national team.

Recently, in London the meeting of Vasily Shestakov, the President of the International SAMBO Federation, with Martin Clark, Head of the British SAMBO Federation, was held. This meeting had a great success and promises good prospects for the development of the British SAMBO. Also, the meeting and exchange of views between Andrey Moshanov, FIAS Director for Development, and Martin Clark, took place. Thanks to the dialogue and face-to-face meeting, the parties managed to clarify the situation, achieve excellent understanding and determine the possibilities of SAMBO development in the UK and worldwide.