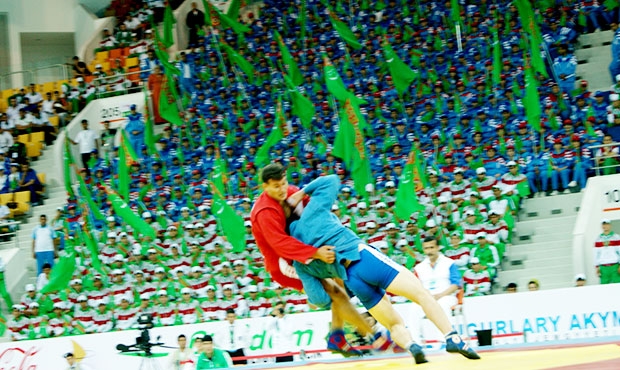 It was, indeed, a dramatic finale. At the opening of the meeting and its entire first half the Kazakh Zekenov (weight category of 90 kg sport sambo) was throwing and leading 4 points in the fight against the Turkmen Megren Joraev, then, as wresters say sometimes, "his gasoline has run out" and it was a knot of 5: , while Zekenov was losing by the last movement. And 2 seconds before the end of the finale he managed to make a throw for 1 point that enabled him to climb to the highest step of the podium of the Asian Championship in Ashgabat. He shared his emotions with the FIAS’s website.

"Honestly, I have not wrestled for a long time. In April I won the championship of Kazakhstan after a pause. And before that I hadn’t not wrested for 3 years. I’ve been working, I married, started a family, had a child, this and that. And now I’ve decided while I’m still young (27 years old), I should fight. Now I dream of the world championship in Bulgaria.

Functionally, I didn’t do my best in the finale, I know myself. But it’s an impulse to prepare better, there's work to do. Today I am happy, this is my first official start I’ve won after a long break and I dedicate the victory to Kazakhstan, my homeland.

In the very near future, in the beginning of July, I plan to start in Atyrau at an international tournament. At home you can’t bring the fans down, so I have to prepare".