Andrei KAZUSIONOK: "I Was Willing Not Only To Defeat My Opponents But To Outfox Them" 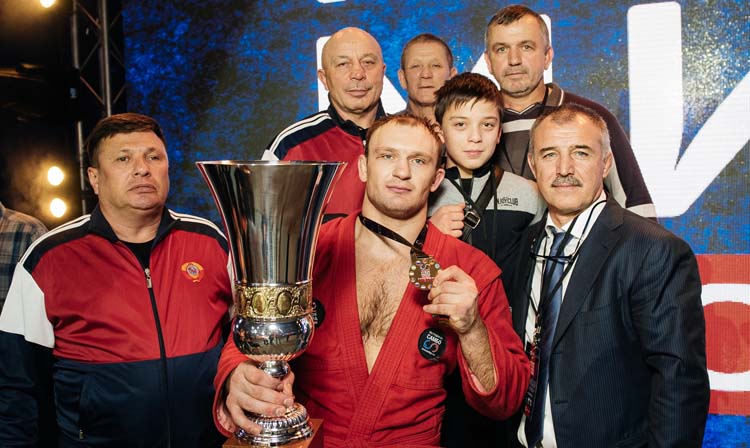 Belarusian sambist Andrei Kazusionok became the winner of the SAMBO Absolute Cup that took place in Sochi, Russia, earlier in December. Following the end of the tournament, he shared with us how such victories are achieved, how he has succeeded to become the number one, and whether he is ready to defend the title next year.

'When my coach Ernest Antonovich Mitskevich and I were deciding whether to participate in the Cup, it was primarily considered that we would have an important tournament scheduled in 6 months (European Games in Minsk), and the risk of injury cannot be ignored,' says Kazusyonok. - At the same time, a fight against the "heavies" is not the easiest type of combat. I knew that I was lighter than my main challengers, and faster, too, as a result. Therefore, we had psyched ourselves up for a high-quality yet careful struggle. But, as they say, never say never again.

According to the athlete, at the tournament he experienced 'new, quite colorful, and, most importantly, pleasant emotions that engulfed me from the first minutes of the competition. And then I realized that I simply have to win.' In 4 hours, the Belarusian had 4 fights with strong opponents.

'I usually intend to save my energy. But during the performance this is not always quite possible. Therefore, you have to rely more on the trained-up reserves,' admits Kazusenok.

'There, I passionately joined the struggle and I don’t remember myself thinking that I couldn’t cope. Not just because I was confident in my strength, but rather because everything was so exciting and pretty swift. This was exactly the case when I was willing not only to defeat my opponents but to outfox them. And, thank God, I succeeded in this,' the champion shares. 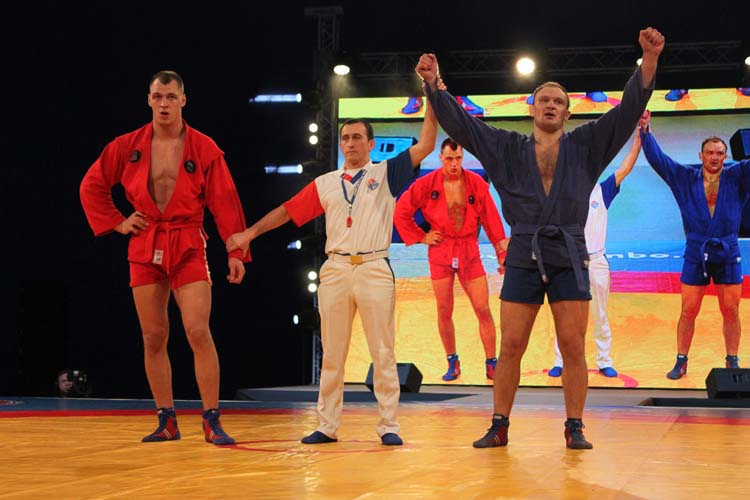 The athlete said that he felt the support that was coming from the fans in the stands. At some point, the spectators began chanting “Belarus!”, and shortly after that Kazusionok performed a spectacular 4-point throw.

'Most often, an athlete uses such moments to consolidate their will and concentration. It is very gratifying and at the same time highly demanding to hear that your country is behind you. I had fought against the Russian, Dmitry Eliseev, earlier, and then I'd lost. And mind you, he is a master of submission locks. And if at the point of his attempt to perform such lock on my leg I was quite able to control the situation, then the arm locks are his signature technique: they put me in a precarious position and were in fact very dangerous,' the Belarusian sambist admits.

He says, there are enough examples in SAMBO when your opponent’s tactics is to hold you down in par terre.

'Half a minute of an attempted knee lock or an arm lock, therefore, wouldn't have done me any good. With the fighting time running out, there was a great chance to lose on points. Therefore, I did everything I could to get up from par terre. And then, at one of these moments, a sort of invisible connection linked together the “Belarus” chanting, the referee decision to put us back in stance, and my throw,' recalls Kazusionok. 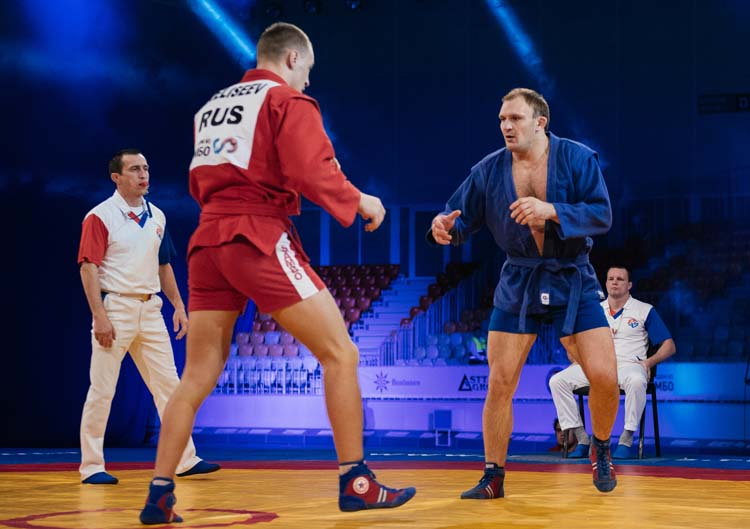 It was not for the first time that the Belarusian sambist was listening to the national anthem as he topped the awards stand, but he still appears to be overflown with emotions.

'Suddenly I realized that I was experiencing some new feelings. And they are related to the pride for my country, for my coach, for my relatives and friends. And the fact that at the opening ceremony, there was played the anthem of the Absolute Cup hosts, and at the closing ceremony - as the decisive emphasis - the anthem of the Republic of Belarus, was a kind of confirmation that our mission was fulfilled in full,' claimed Andrei Kazusionok.

The sambist has got quite rich experience of performing in various countries worldwide, to assess the organizational standard of the Cup.

'Competitions in Sochi left a real feeling of vivacity and verve, due to some new stuff, quite differing from the traditional format. The entrance of the participants on the mat, their presentation, the presence of a great number of Honored Masters of Sports, Honored Coaches, the spectators' reaction, the premiere of a film dedicated to SAMBO, with historical footage previously unknown to the general public - all this makes the SAMBO Absolute Cup different from other competitions that I took part in,' noted the Belarusian athlete.

Kazusionok says he reacts to the surrounding energy vibrations, noticeably to himself.

'If I understand correctly, then, according to the idea of the tournament organizers, the entrance of competitors to the parade was timed to coincide with the entrance of the Soviet SAMBO veterans and Honored Masters of Sports. I am certain that the possibility of such contact with the living legends lent an additional pleasant excitement and strength before the fights to all 16 competitors. I felt it with my whole body, it even gave me goose bumps,' admits the sambist.

He told how the legendary Aslambek Akhmedovich Aslakhanov had approached him, encouraged him with a few kind words and gave him a precompetition massage. 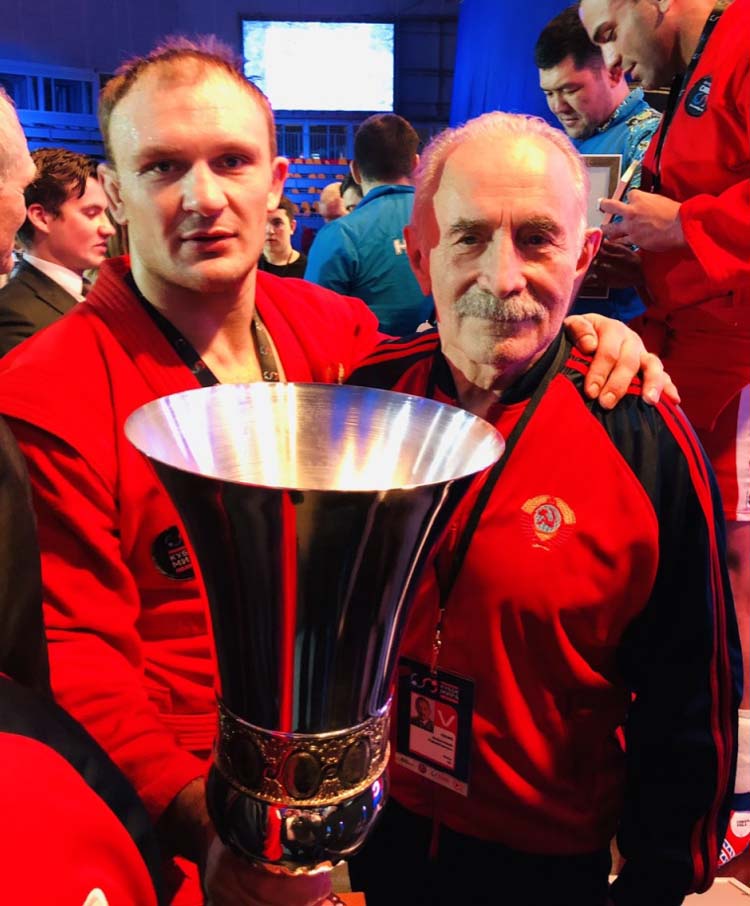 'In my sambist life, it was like a miracle. How do you think I should have performed after this?!' asks a rhetorical question Kazusionok.

Maybe next year the Belarusian will have to defend his new title of the SAMBO Absolute Champion.

'God willing, if everything be fine, with me being invited, I will definitely take part in this tournament. To me, defending the title of the winner of the SAMBO Absolute Cup will be a highly honorable duty,' claimed Andrei Kazusionok.