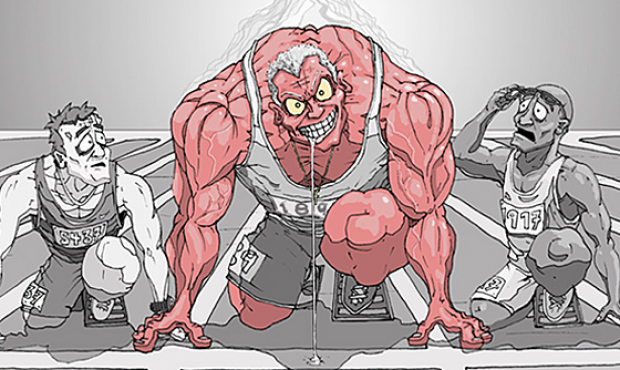 The concept of “doping” was introduced into sports in 1865 and has long been associated, curiously enough, with stimulation of horses at races. Initially doping was understood as using the substances which artificially improve efficiency of performances. Interesting that this problem also existed in ancient Greece. They have their own kinds of doping, and their own drug tests. The referees at the Olympics could easily check whether an athlete had used one of the most potent agents of the time immediately before beginning of the competitions. It was garlic, and a whiff of garlic is difficult to deodorize.

In 1904 Tom Hicks, a marathon runner, nearly died after taking a heavy dose of strychnine. It was the first ever accident which may be used as an argument proving doping harm.

World Anti-Doping Agency (WADA), currently headed by Mr. John Feyhi, former Minister of Finance of Australia, is an independent organization set up with the assistance of the International Olympic Committee (IOC). Initially WADA got funds from the IOC, but nowadays the International Olympic Committee funds the Agency only by halves, the rest of the funding is provided by the Governments of the world states.

The main WADA document is the World Anti-Doping Code, the current version of which came into force in 2009. Fight against doping is regulated by so-called International Standards: for testing, for laboratories, for therapeutic exceptions and the Prohibited List.

For international sport federations the basic rules regarding fight against doping are adoption and implementation of anti-doping principles and rules in accordance with the WADA Code.

In today’s interview with Sergey Tabakov, Executive Director of the International SAMBO Federation (FIAS), we’ll learn how FIAS complies with the WADA principles, the difficulties encountered, and the results achieved in this work, and about the state of modern Doping Free SAMBO in general. 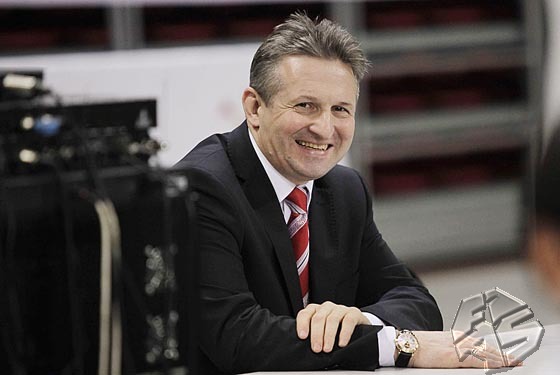 – Sergey, we’d like to know, as a matter of principle, what is your attitude towards this concept of doping. Recently, the issue of banning or permitting use of doping has been increasingly discussed in the media, up to seditious ideas – to say “yes” to doping in sports...

– As a matter of principle, when it comes to commercial sports, I think the situation concerning authorization of doping should be released. Because historically these sports are a priori tied to use of doping, and, in principle, the fight in these sports has long looked like a battle of technologies. For the sake of making money people are consciously ready to sacrifice the most important thing that the Lord has given us – health.

Taking into consideration non-commercial sports and SAMBO in particular, I think it is necessary to avoid influence of such sophisticated technologies as doping on the result. In my opinion, the nature must compete. And this is, first of all, the system of training (technical, physical, psychological, etc.).

– It is extremely clear and exact. Now let’s talk about the interaction of WADA and FIAS, what is the history of relations, what is being done at the moment and what are the most immediate plans?

– If FIAS didn’t set itself the task of promoting SAMBO to the Olympics program, I think the issue would have stayed at primitive level of development. But these days real preconditions have been done and serious steps have been taken towards a compliance of our federation with the modern IOC requirements. And one of them is work towards fight against doping.

FIAS history in this matter was, frankly speaking, sad. At its best, the athletes, coaches and organizers who participated in judo competitions had an idea of doping. For the others anti-doping was a kind of a “horror story” that threatened a disqualification, and that’s all. As a matter of principle, we were miles from the fight against doping, as a concept, we didn’t know anything about it and didn’t experience it.

We experienced the first breakthrough in this work during the preparation of the I SportAccord Combat Games 2010 in Beijing, where we had to arrange all the organizational work in accordance with the principles of WADA. Then we took it on the mantle at the World SAMBO Championships 2011 and 2012, this year all the Stages of the World Cup will also be held with the probe sampling.

As for the official part of the work, in the beginning we tried to arrange our work directly with WADA. For various reasons, this attempt was unsuccessful. After that it was decided to apply to the SportAccord, which offered us to cooperate in this matter with its Anti-Doping Department. Now we are successfully cooperating with them. We started cooperation in January 2012 and since then we have made a significant progress, because by that time we had already had distinct results and managed to comply with the rules dictated by the SportAccord and WADA easily. I’d like to express my gratitude to Ms. Françoise Dagore, Head of the SportAccord Anti-Doping Department, and her assistant Mr. Matteo Valini.

During this time we managed to develop Anti-Doping FIAS calendar by joint efforts, we have introduced the “Anti-Doping” section on our website, have developed rapidly and, what is the most important, effectively operating work in a complex chain: FIAS – SportAccord – WADA.

In the nearest future, our aim is to intensify agitational part of the work. In particular, we have already had an agreement that at the World SAMBO 2013 (Greece, 10-14 October), the specialist of the SportAccord Anti-Doping Department will carry out a series of lectures for athletes, coaches and organizers and provide special literature. Greece was selected for some reason, because the youth is our pool which has to create the future history of SAMBO glorious victories. And we want this story to be clean, that is, doping free. And of course, now we are developing short- and long-term programs for our further cooperation with the SportAccord in this matter.

Certainly, it was impossible to carry out all this work without FIAS and the National SAMBO Federations management support. For my part, I would like, first of all, to thank Vasily Shestakov, the President of FIAS, for absolute credence for his part which he gave me in this project. The fact is that before I faced the anti-doping problem only as a coach and competitions organizer, not as a functionary. It was a new thing for me, and this support is, of course, put me in good heart. It’s nice that the FIAS President served as my ally in this issue.

I’d also like to thank those members of the FIAS Executive Committee and the Presidents of National SAMBO Federations who bore with the new case for SAMBO and provided for their part all the necessary conditions for implementation of the FIAS initiatives in this direction.

– Regular FIAS website visitors noted the fact that a section relating to anti-doping appeared. How do you consider this section, what meaning does it carry, what does it teach and help, how will it develop in the nearest future?

– Yes, now we have such a site column. Its design is the result of joint efforts of the SportAccord representatives and FIAS specialists. By the way during the work on the column in this regard it was nice to hear positive feedback on our operational and creative work from the SportAccord specialists. There aroused a feeling that they were happier than we were (laughs).

The meaning of the site section first and foremost is to inform and promote among all SAMBO movement participants, is a kind of tool for actions in certain arising situations on anti-doping issues. In this column we regularly reflect all the information on the fight against doping in accordance with our current work. We also rebroadcast the information about current trends with respect to this issue which we receive from the SportAccord professional magazine, as well as circulars and newsletters of the organization.

The column development strategy is to translate all its articles into four official languages of the site, and to make its language less scientific and more accessible. I’m sure it all is in our power.

– To sum up the work done in cooperation of WADA and FIAS, can we loudly declare that it is a new step towards a Doping Free SAMBO?

– I think that in this regard we have done a major, meticulous and important work. My opinion is that for FIAS it is a significant step towards the world of modern sports community.

The letter from WADA about confirming FIAS anti-doping program