African SAMBO Championship in Morocco: the names of the champions and prize-winners have been announced 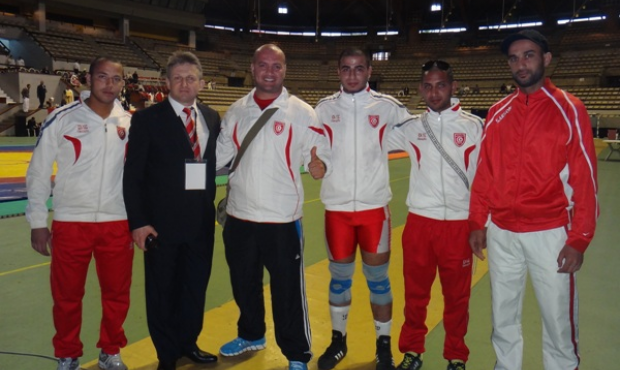 This report from Casablanca will give You information on the following: the specific character of the African SAMBO Championship 2013 and the names of the champions and prize-winners, as well as what the champion from Tunisia saw in his dream and how the gold medal winner from Morocco will celebrate his victory and who came to this championship from America.

The specific character of the African SAMBO Championship could be seen from the decoration of the hall and some organizational traditions that were quite new to us. What specific details of the tournament impressed us? Some portraits of the King of Morocco Mohammed VI that the hall was decorated with: in the portraits he, “the tea emcee”, sat on the draped velvet chair all dressed in the national costume and almost not visible because of the great number of silver tea ceremony items. And also there were a great number of the national dances and songs that preceded every final match of the tournament.

The beginners at the African Championship 2013 also surprised us. They were the team from the Seychelles and Ghana. The debut of the teams was a real success: Ghana got a bronze medal with the help of Razaga Aborigi in the weight category of 62 kg and the team of the Seychelles will leave Morocco with two bronze medals of Francis Labrosse (68 kg) and Nadi Cliff Jean (74 kg). The sportsmen from the Seychelles are judo athletes who tried on sambo jerseys in Casablanca for the first time, which was quite successful. The President of Sambo Federation of that country Monique Atanase was very happy as the success of her team is her success. Monique said: “I am like a second mother to them and I am happy for their today’s successes as if they were my kids.”

The bronze medals of the African SAMBO Championship 2013 were won by sambo athletes from many countries. Among their holders, besides the athletes that have already been mentioned, the rankings also include sambo athletes from Tunisia, Cameroon, Congo and Niger. And the gold was won by the Moroccans in 6 out of 7 weight categories.

Only Safyan Khavashi from Tunisia (90 kg) managed to ruin the hegemony of sambo athletes from Morocco. It was he who put the been on Razuk Khalid from Morocco with the score 4:1 due to remarks and a flip with foot fault for 1 point. The champion said: “Just before the Championship I had dreamt about a medal…but not the medal of this tournament, but the gold one of the World Championship in St. Petersburg. And today’s victory I first of all dedicate to Tunisia and, of course, to my mother.”

We also asked the champion in the weight category up to 82 kg Maruan Ulhaja from Morocco how he would celebrate his today’s victory. Maruan said: “I will hang out with friends. What does it mean to hang out in a Moroccan style? For us it is watching movies, eating ice-cream, going to a café, communicating….”.

And the champion in the weight category of 68 kg Alaa El Idrisi had come to this Championship in Morocco from the USA. He has been living and practicing judo and SAMBO and has been coaching the representatives of the mixed combat sports in the United States of America for 2 years already. He came to the tournament in Casablanca on the request of Dalil Scully, The President of the African Sambo Confederation.

The American Moroccan said: “SAMBO is attractive to me because it is a mixture of technical activities and holds of many combat sports and it is a very well-balanced and interesting mixture. My today’s aim in SAMBO is the gold medal of the World Championship in St. Petersburg”.

Those are the high goals that the African SAMBO champions set for themselves. We are sure that their opponents from Europe, Pan-America and Asia are not less ambitious. They all have a lot of opportunities ahead of them to show themselves – The World Summer Universiade in Kazan (Russia) and II SportAccord World Combat Games in St. Petersburg (Russia) and the aforementioned World Championship.

Keeping in mind that the strongest one will win, we wish luck to all those who have fought today and at the same time to those who are still going to determine the strongest athletes at their National Championships in Crema (Italy), Seoul (South Korea) and Panama-City (Panama).