Asian Sambo Championship 2016 in Ashgabat: seven major facts about the Congress of the Asian Sambo Union 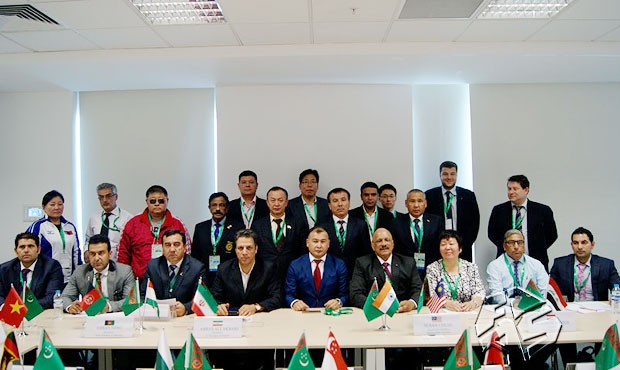 Today, on the first day of the competitions of the Asian Sambo Championship-2016 in the conference hall of the sports complex for martial arts of the Olympic Village in Ashgabat has taken place the Congress of the Asian Sambo Union. The meeting was attended by delegates from 20 countries who last met on a similar meeting 5 months ago in the Kazakh city of Atyrau.

"I would like to thank the Sambo Federation of Turkmenistan, the State Committee for Sport of Turkmenistan and the organizing committee of the competition for the preparation of the Asian championship at such a high organizational level. I would also like to point out that thanks to the work and support of all of you, leaders and representatives of the Asian Sambo Federations, the sport is growing rapidly on the continent. Currently sambo is a member of the Asian Beach Games 2016 (Da Nang, Vietnam) and the Asian Indoor Games and Martial Arts Games-2017 (Ashgabat, Turkmenistan). Recently, good news came from the meeting of the National Olympic Committee of Asia, from Indonesia: sambo was included in the sports program of the Asian Games-2018 which is the main multisport start of the continent. We've all been waiting for this for a long time, and finally, thanks to our joint fruitful work, have achieved success".

Today, on the first day of the Asian Sambo Championship-2016 its main inspiration and organizer, the President of the Sambo Federation of Turkmenistan and the honored coach of Turkmenistan is celebrating his birthday. Ata Adaev was congratulated by all the delegates of the Congress, and the president of the Asian Sambo Union Alamzhon Mullaev presented a commemorative gift to the birthday boy.

New appointments and elections at the Asian Sambo Union

Suresh Gopi, the general director of the Asian Sambo Union, was appointed chief technical delegate of the organization, while Anwar Muhammedov was named his deputy. By this appointment the Asian Sambo Union delegated to Muhammedov and Gopi all issues related to the preparation of the Asian Games in coordination with the National Sambo Federations, as well as communication with the Olympic Council of Asia and the organizing committees of the games.

About the work on expanding the geography of the Asian Sambo Union reported its general director Suresh Gopi: "Not long ago we signed a memorandum with the Chinese government, which, I believe, will help us to resolve the issue of the recognition of China's Sambo Federation by the Olympic Committee of that country as soon as possible. We hope to receive this recognition this summer. Also, we are actively working in the Maldives and Bhutan, I hope that this work will soon give us new members: national Sambo Federations of these countries. At the end of the Gopi’s report the congress’s delegates voted for the inclusion of Sambo Federation of China and Macau in the ranks of the Asian Sambo Union, as well as accepted as a member the Sambo Federation of Sri Lanka under the leadership of Kitsri de Zoysa.

According to the decision of the Congress last year in Atyrau the Asian Sambo Championship-2017 will be held in Tashkent (Uzbekistan). On the preparation of the launch of this continental competition to the delegates of the Congress reported the President of the Sambo Federation of Uzbekistan Ravshan Akhmedzhanov: "Preparation is already underway, we are ready to receive all the guests and participants of the championship around more or less same dates, maybe a week earlier, it won’t be so hot (laughs). We will provide a simplified visa regime. The tournament will be held at the same beautiful, great hall, the sports complex "Uzbekistan" which hosted the championship of Asia-2014".

The delegates decided to hold the continental Asian Sambo Championship-2018 in Indonesia, provided that in the near future the issue will be resolved positively with the federation of the country. This decision was due to the fact that it’s in Indonesia where the Asian Games will be held in 2018, and the Asian Sambo Championship would be a good test event in the run-up to the start of the games.

A report on anti-doping telling about the main "pain points" of the modern world of sport without doping was presented before the congress’s delegates by the FIAS’s project coordinator Camila Vokoyun Haykova. The leaders of contemporary Asian sambo with great interest and attention listened to Camila’s report because all the issues that she raised in her speech: the responsibility of the coaches and doctors, the use of food supplements, the rules of WADA and the nuances of passing athletes’ doping tests - are recognized at the moment as most important in the fight for a clean sport.