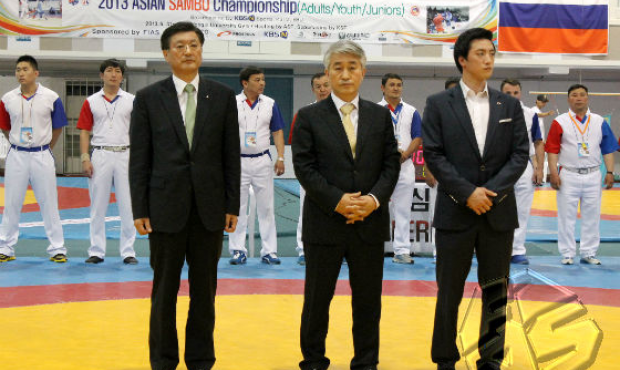 Asian SAMBO Championship, held from 1 to 2 of June in Seoul (South Korea), was best remembered not only for his sports results, but also became history thanks to the excellent organisation of the tournament. Athletes, coaches, the Presidents of Federations, spectators and TV audience – everybody managed to express his opinion on the carrying conditions of the Continental Forum during the two competitive days. FIAS website aggregated all these statements and offered them to your attention.

Japan is one of the closest neighbors of South Korea. Both countries are famous for their workaholism all over the world. Who but the Japanese can assess the extent of the work done? “I know that Mr. Mun and his Federation haven’t had much time to organise this Championship. But he pulled out all the stops, did a great job and managed to prepare whatever was required to hold the tournament at a really high level – comments on the President of the Japanese SAMBO Federation Masaaki Kondo. – We express our admiration to Mr. Mun, and hope that in the near future we will have an opportunity to hold the Asian Championship in Japan. We will try to organise it as good as the SAMBO Federation of South Korea did”.

The desire to put their hands on the Asian Championship appeared to be contagious to many participants of the tournament in Seoul. Perhaps it is the same thing as desire to perform conjuring tricks. When you see that someone is good at something, you also want to do it. One of those who in South Korea got a powerful charge of inspiration for the development of SAMBO was the President of the Indian SAMBO Federation Suresh Gopi. “This Asian Championship was attended by 4 athletes from India, two of whom managed to win medals. Of course, as in every new case, there were some small roughnesses at the tournament, however they didn’t spoil the overall favorable impression. And I know for sure one more thing: all together we can overcome any difficulty. Today I’m sure of the bright SAMBO future in Asia, South Korea, and, of course, in India. I will contribute to this, and I will do everything possible to develop SAMBO in my country and on our continent. I want to hold the Asian Championship in India in years to come”, – said Mr. Gopi.

The main participants of any competitions are athletes. We decided to learn the “look from the mat” from the Iranian SAMBO athlete Hodhodi Abkenar Behnam, who became a two-time champion of Asia in Seoul. “I liked the competitions very much, especially the way they were organised, – shared the athlete with us. – In addition, they turned out to be fortunate for me – in Seoul I won my second “gold” of the Asian Championship, before that I won the “silver”. I have something to compare with, and I can say that these were the most wonderful carrying conditions for the tournament at the Continental Championship I have ever known. I hope that in Asia SAMBO will continue to develop in the right direction at the same pace. As for me now I am falling on the preparation for the Universiade in Kazan”.

Near the champion the President of the SAMBO Association of the Islamic Republic of Iran Abbas Ali Akbari exuded optimism and made people stare at his snow-white smile. Talking about his own impressions, he decided to delve into the history: “The first World SAMBO Championship was held in 1973 in Tehran, and after the event, SAMBO began to develop rapidly in Iran. The Asian Championship, which took place in South Korea today, will probably give an impetus to the development of our favorite combat sport in this country. Besides, this tournament has raised the bar to which all hosts of the Continental championships must strive for now”.

From the history and the present day Mr. Akbari passed on to prospects: “As the Vice-President of the Asian SAMBO Federation, I’m going to work on attracting a growing number of national federations to our organisation. It will enable them not only to develop SAMBO effectively in their countries, but also to participate in such large-scale international competitions which we had the honor to attend these days, and to improve skills while meeting with strong rivals. It’s great that such tournaments are held in Asia which help to attract more young people to SAMBO. I think if our favorite sports will continue to develop so well, soon we will see SAMBO in the Olympic Games”, – he concluded.

At the Asian Championship FIAS Sports Director Dmitry Maksimov not only followed the course of the competitions and administered their carrying out, but also acted as a commentator. It was his voice that all the audience of the live webcast heard on the FIAS website. “Speaking about the tournament in Seoul, first and foremost I would like to notice high quality of the TV picture broadcast and emphasize the professionalism of members of the Korean television crew. And secondly, I want to say particularly that all participants of the Asian Championship showed good fighting: a bright, entertaining and intense, – says Dmitry Maksimov. – It’s nice to note that among the prize-winners of the Continental Forum there appeared representatives of the countries where SAMBO is taking just its first steps: Taiwan, China, India, Japan and others. I think it is reasonable to hope that in the near future these Federations will find a lodgement as leaders in the world SAMBO community because of their rich heritage and a love of martial arts. In addition, it should be noted the significant progress in the level of training of the Asian SAMBO current leaders – Kazakhstan, Kyrgyzstan, Tajikistan and Mongolia”.

The Vice-President of FIAS, the President of the All-Russian and European SAMBO Federation Sergey Eliseev spoke about the fact that thanks to this Asian Championship, SAMBO Federation of South Korea made a huge step forward. “It should be noted that a clear and smoothly running organisation of such a big tournament – is largely the merit of the Korean SAMBO Federation President Chong-Keum Mun. He took personal control of the reception and accommodation of delegations from other countries, worked on the visa support, quickly solved various problems. In general, there is no doubt that without any doubt FIAS can trust South Korea to hold the World Youth SAMBO Championship in 2014, as it is planned according to the official international competition calendar, – said Mr. Eliseev. – To sum up, I’d like to express the opinion, which was voiced by so many participants and guests of the past Asian Championship: Korea and the President of the local federation Mr. Mun are becoming one of the leaders, trend setters in the Asian SAMBO”.

The FIAS website made the secret clear of how SAMBO Federation of South Korea managed to organise major continental tournament at the highest level on the first try, from the President of the Korean Federation Mr. Chong-Keum Mun.

– Mr. Mun, what is your assessment of the past tournament?

– Despite the fact that we had a little time for preparation, I think we managed to organise the Asian Championship in South Korea properly. I’d also like to note the tremendous support that was lent by the International SAMBO Federation. The competitions were attended by teams from 13 countries and the level demonstrated by SAMBO athletes was really very high. The tournament aroused an increased interest on the part of the media: it was written in the papers a lot, showed pieces on television. The camera crew of the largest national sports TV channel KBCN of the country worked at the Championship on both competitive days, so that the Koreans were able to see what is SAMBO with their own eyes.

– What can you say about the Korean athletes’ performances at the competitions?

– I think that now at the Asian Championship our athletes showed their ability to only 50-60%. Their potential is much higher. However, the fact they managed to win medals of all values, can be considered a successful performance. We invited teachers from Russia to train the Korean athletes and prepare our team to major tournaments. The results that we have achieved, proved that we are moving in the right direction. It means that we will continue the practice of inviting coaches from Russia, because our objective – is to prepare qualitatively as many as possible SAMBO athletes in South Korea. I think over time we will be able to bring up our own coaching staff.

– Is there rest after such a big and responsible tournament in your plan view now?

– The Championship is over, but there is no time to rest. Now we need to prepare well for the Universiade in Kazan and there is more serious work to do on the organisation of the 2014 World Youth SAMBO Championship. It is more than a year to this tournament, so I’m sure that we will do everything necessary to hold the competitions at a very high level. But we need to start the work now.