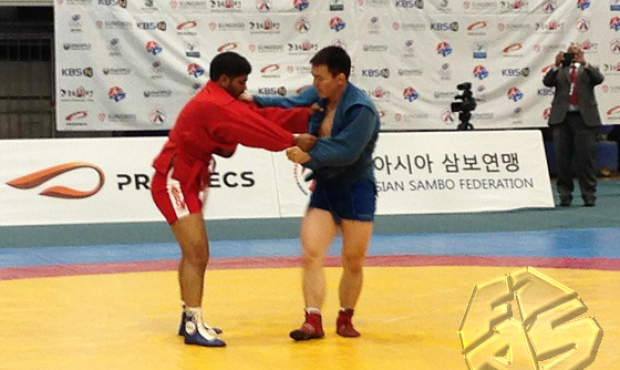 In order to explain what is SAMBO to the Korean, extraneous to sports, suffice to say just two words: Fedor Emelianenko. The legendary athlete is well known to almost every resident of South Korea. However, on the early days of summer 2013 Seoul “personally” and all South Korea again became acquainted with SAMBO by multimedia – by means of TV coverage on the country’s leading sports channel KBCN. The Asian Championship in this sports has become the reason for this acquaintance.

Interestingly that in both cases, the main person who contributes to the Koreans’ knowledge of the combat sport, is the President of SAMBO Federation of South Korea, Mr. Chong-Keum Mun. About 7 years ago, when the federation headed by him hardly reached 3 years old, he invited Fedor Emelianenko to South Korea, so that the Koreans managed not only to see the performances of The Last Emperor, but also to get to know him personally. Surge in interest in SAMBO, caused by perfectly organized tour of the great athlete, has consisted in a multiple increase in the number engaged in the combat sport, new for South Korea.

Today the country is talking about the Asian SAMBO Championship, which took place on the arena of the largest Yong-In Sports University. One can talk on this university interestingly and long, that local functionaries do with pleasure, but we will highlight only two features. The first one: students and graduates of Yong-In won 11 medals for South Korea at the Summer Olympics in London. The second one: the majority of the most decorated Korean masters of related to SAMBO judo received and receive higher sports education in this university. It is a quite symbolic place for the Asian SAMBO Championship, the first “home” for South Korea.

One could learn the fact that the Continental SAMBO Tournament is held on the Yong-In arena, simply walking down the street near the Sports University or hotels where the competitors had tayed. Advertising banners announcing the Asian SAMBO Championship, billboards and posters in the Korean, English and Russian languages invited all fans of combat sports to the spectacular show.

To support the participants and enjoy the performance by the Asian continent SAMBO athletes not only those came who were already familiar with the sports, but also those who had first learned about it the day before. Interestingly, that the central stand and VIP-lounge were busy – many distinguished guests wanted to see SAMBO, as the saying goes, with their own eyes.

There is a tradition in South Korea. At the time of significant events to express your high regard with special wreaths (in Korean they are called “hvahvan”). They are decorated with a pink ribbon, on which they usually write wishes for the event and indicate the person who sends this wreath. We’re pleased to note that the debut of the Asian Championship in South Korea was decorated by hvahvan of one of the honored guests of the competitions.

Another Korean tradition, which appeared not so long ago, but has already become one of the trademarks of this country, is the songs of the local artist PSY. Famous throughout the world because of his clip “Gangnam Style” on the Internet, the rapper not only entered the Guinness Book of Records by the number of views of his video on Youtube, but also taught the planet new dance movements. These movements and the new musician’s hit “Gentlemen” formed the basis of the Korean athletes’ performance at the opening ceremony. Those who watched the live webcast of the event on the FIAS website surely memorized that spot, the rest will have a chance to evaluate it in the record. It is impossible to be described in words.

The sports component of the tournament appeared to be also impressive. Over 200 SAMBO athletes of the Asian continent entered the struggle for the medals at the competitions of girls and boys, juniors, as well as at the “adult” tournament in Sports and Combat SAMBO. As experts had predicted, the main favorites of the tournament were the teams of Kazakhstan, Tajikistan, Kyrgyzstan and Mongolia. Hardened in duel meets of various levels, SAMBO athletes of these countries felt confident at the 2013 Asian Championship.

However, even the less experienced, but more greedy for victories novices didn’t allow favorites to relax. The Korean SAMBO athletes are particularly noteworthy, who didn’t give up until the last second of every fight. The fight for the finals in the category of 68 kg in Combat SAMBO appeared to be the most demonstrational. At first the Korean Yong Ju Kim confidently took the lead against his opponent from Mongolia Shovgor Enkyavkalan, then made some serious mistakes and began to lose. However, he was looking for the chance until recently, and 6 seconds before the end of the fight he found it. A throw for 4 points – and he got in the finals in the local public’s joy. In the duel meet for first place the rival celebrated the victory, but after such finals the Korean “silver” still appeared to be goldish.

Absolute debutant of the Asian Championship, the Taiwanese team performed in a similar style at the competitions among girls. The excitement before the start, points lag in the fight for the finals and a spectacular throw a second before the end of the fight. Successful outcome in the fight added confidence, thanks to which female SAMBO athlete from Taiwan became the champion of Asia.

The Iranian Hodhodi Abkenar Benam’s way to the victory, on the contrary, initially seemed pretty easy. Perfect technique in conjunction with a sensible strategy allowed the SAMBO athlete to win a number of fights in succession with confidence and qualify for the finals. And it was there where he confronted a challenge in the form of a masterful Japanese Kinzho Yoshitsune. Although the fight between the two heavyweights, didn’t abound with lots of technical actions, it appeared to be incredibly tense. As the Iranian SAMBO athlete confessed in his interview for the FIAS website, having a throw for 4 points, he decided to keep that advantage by any means. And he succeeded in spite of all the efforts of the opponent.

There were really a lot of interesting fights at the Asian Championship in Seoul. Both a large number of well-trained SAMBO athletes from different countries and the excellent competitions’ organization by the SAMBO Federation of South Korea contributed to it. The Continental Championship participants’ opinions, as well as the exclusive comment of the Korean SAMBO Federation President Mr. Mun – are in the next article of the FIAS website.