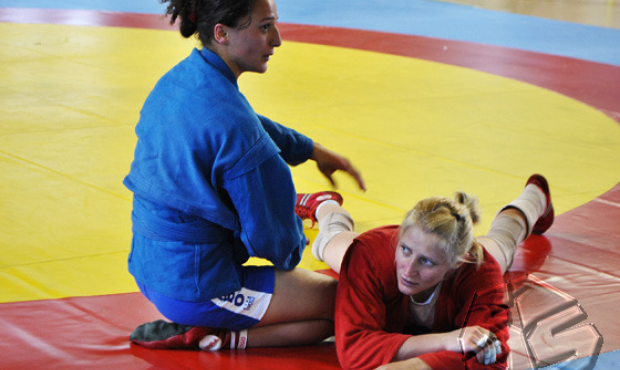 In this report we’ll tell you about the sensation that hasn’t been created by Ushangi Kuzanashvili from Georgia today and the French woman’s “silver”, which, by her assumption, should be melted down into the “gold” of Kazan in July. We’ll also tell about the champion from Belarus – the son of the famous Armenian SAMBO athlete Gurgen Tutkhalyan and twists and turns of heavyweights fighting in Sports SAMBO.

Let’s start with the sensations, namely, not realized sensations. Today the Georgian Ushangi Kuzanashvili didn’t manage to fill in his name in the history of SAMBO by means of the phenomenal record. The fact is that he is the 2-times European champion, in the weight categories of – 52 and 57 kg respectively. And on the final day of the competitions, performing in the weight category of 62 kg, he was close to achieving a kind of a record – to become the three-times European champion in three different weight categories. But, unfortunately, the sensation didn’t succeed in Crema. Ushangi is on the third line in the final minutes.

Gurgen Tutkhalian – is the 4-times World SAMBO champion from Armenia, the legendary ground fighting athlete, who was mentioned in our reports from the European Championship in Cyprus. At that time we remembered him in connection with the Armenian SAMBO athletes’ success, shown by them in the ground fighting. We wrote about the father from Limassol, and about the son we will write in the report from Crema. It was he – Vahe Tutkhalian who became the European champion in the weight category of 57 kg in Sports SAMBO today. In the finals against the Russian he masterfully made the winning score 5:2 on the scoreboard by means of a few shots, having shown the phenomenal wrestling character and a great thirst for victory.

Laura Fournier brought the sensational “silver” in the weight category of 56 kg among women in her team’s collection (the Russian woman Nadezhda Zaitseva became the champion in this weight categories). She said: “Initially I – am a judoist, but due to the changes in judo rules I turned to SAMBO. To date SAMBO is very interesting and in particular its possibilities to realize one’s potential makes it highly attractive. I’ve been practicing it for 2 years, and the Championship medal – is my first great success. My objective – is to win the “gold” of Kazan and St. Petersburg. In our life everything is possible, why not?”.

Why not? The Georgian heavyweight Nodran Metreveli must have said to himself very much so, and today he has gradually defeated the undoubted leaders of his weight category – Yury Rybak and Vitaly Minakov. But in the finals he yielded precedency with the score of 3:1 to the Bulgarian SAMBO athlete Ivan Ilyev.

Ilyev’s golden success hasn’t helped the Bulgarian men’s team of the Sports SAMBO athletes to take the place in the top three of the overall team fighting. It looks like this among men: Russia, Belarus, Georgia. Women’s teams on the basis of the overall team fighting lined up in the following order: Russia, Belarus, Ukraine. And among Combat SAMBO athletes the trio of the leading teams is the following: Russia, Ukraine and Bulgaria.

THE RESULTS OF THE THIRD COMPETITION DAY
European Sambo Championships
Crema (Italy), May 20, 2013: