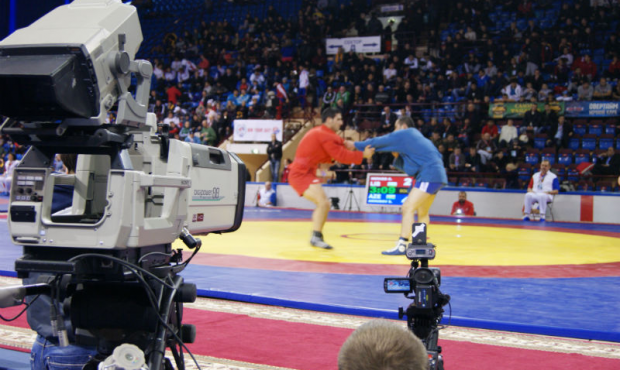 Today in the capital of Belarus at 10 am local time the World SAMBO Championship started. The morning portion of the program consists of preliminary competitions, the results of which will determine finalists in three weight categories for men, women and combat SAMBO. Then the official opening ceremony of the tournament will be held, after which the decisive combats of the first day will take place. FIAS will be broadcasting the evening portion of the championship live.

Brooks of spectators are sweeping to the Palace of Sports from the very beginning of the competition forming a powerful river at the stands of the Minsk Palace of Sports, which periodically creates a wave. Arena which holds the World Championship 2012, is designed as an ice palace, but the hockey box can be quickly transformed into a venue for all sporting events. The day before the start of the competition employees of the Palace of Sports with habitual movements made the mystery of turning ice surface into SAMBO floor. They put on ice a special coating that prevents ice melting and penetration of the cold outside. And above that were SAMBO carpets.

According to experts, the Minsk Arena is one of the best among those where competitions were held in recent years. Although capacity of the stands is only a little more than 3 thousand spectators, the noise support during fights reminds the atmosphere on huge football grounds. Not only fans in the stands in Minsk can feel the atmosphere, but all spectators of online broadcast of the evening part of the World Championship 2012 program at the FIAS site.