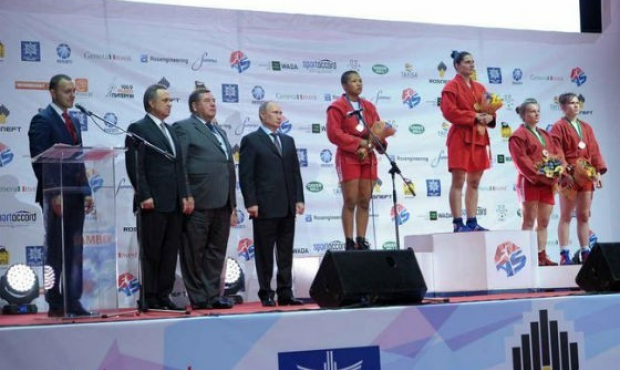 The XXXVII World Sambo Championship is currently being held in St. Petersburg. Yesterday, many distinguished guests attended the event opening at the Yubileyny Sports Palace. Among them were President of the Russian Federation Vladimir Putin, Minister of Sports, Tourism and Youth Policy Vitaly Mutko, President of the European Judo Union Sergei Soloveichik, four-time sambo world champion Fedor Emelianenko, and many others: great athletes, prominent public figures, and politicians. During the opening ceremony and meetings which took place at the World Cup, many words were said about Olympic hopes for sambo. In our today's reportage we'll discuss a connection that is directly linked to sambo’s Olympic future.

The application for recognition of FIAS has been sent to the International Olympic Committee and is currently under consideration. In August this year, FIAS President Vasily Shestakov met with the IOC Sports Director Christophe Dubi. At the meeting, the two men discussed FIAS application revisions and talked about the most important issues that the International Federation of Sambo must resolve in the near future. Among some of them, the FIAS has already managed to resolve, are creating a committee of athletes and an ethics committee, as well as increasing the number of women in the leadership of the Federation. The IOC sports director also identified the need to establish cooperation with Federations of Sambo-friendly sports, such as judo and wrestling.

FIAS also cooperates with the International Federation of Associated Wrestling Styles (FILA). When St. Petersburg opened the XXXVII World Sambo Championship, FILA President Nenad Lalovic in Rome (Italy) met with the athletic director of the International Olympic Committee (IOC) Christophe Dubi. They discussed cooperation between FILA and FIAS. Georgy Brusov, a member of the FILA Bureau, was present at the World Sambo Championship, and commented on the results of this meeting to the news agency ITAR-TASS: "For some time, Sambo was part of FILA. Now the organization is not involved in worldwide sambo development in any form. Moreover, it recognizes and respects the International Sambo Federation headed by Vasily Shestakov as the only organization responsible for the development of Sambo in the world. On our part, FILA is ready to provide all possible support to sambo in its promotion to the Olympic family."

"The fact is that Judo and wrestling are sports that are very close to us. To date, we have an agreement in principle to support each other. The next step is to sign cooperation agreements with the International Judo Federation and the International Federation of Associated Wrestling Styles,” Shestakov says of the meetings with the President of FILA Nenad Lalovic and IOC sports director Christophe Dubi, “We will continue to work to strengthen our cooperation with both wrestling and judo. Surely, this interaction will not only give further impetus to our sport, but will also strengthen the position of martial arts in today's world of sports."