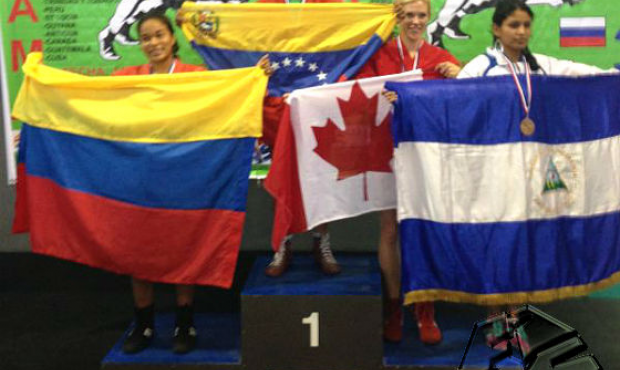 The Pan American SAMBO Championship ended on June 16 in Panama. The Pan American Championship is the final continental event taking place under the auspices of FIAS this year. A little earlier Africa identified the best SAMBO athletes in Casablanca (Morocco), Europe in Crema (Italy) and Asia in Seoul (South Korea). Let’s recall that in such a way all participants of the II SportAccord Combat Games starting in St. Petersburg (Russia) in October have been identified. Indeed, the continental starts were qualifying for the October Forum of martial arts and combat sports.

On the part of the Pan-American continent, respectively, in Panama athletes from 8 countries: Venezuela, Honduras, Argentina, Canada, Peru, Colombia, Nicaragua, and the United States were selected to participate in the Games in the cultural capital of Russia.

Ariel Zganga who won the “gold” in Panama will represent Argentina in weight category of 90 kg in Saint-Petersburg. In addition to his medal there are two gold and a bronze award in the Argentines’ collection. The President of the Argentine SAMBO Federation Juan-Pablo Melo revealed us the secret of success of his small but accomplished team: “The fact is that we are one family, we have very friendly relationships within the team, it makes us more close-knit. And when we are close-knit, we are invincible”.

The good performance of the Colombian athletes at the current championship should not go unmentioned, there are 3 gold, 3 silver, and 4 bronze medals “clinking” in their Panamanian collection. The President of the Colombian SAMBO Federation Omar Lopera Tamayo said: “Today we are in the top five winners; it is a creditable result for us, because we have been practicing SAMBO for only 5 years. Currently, we are training children who originally came exactly in SAMBO and have not moved into this sport from other combat sports. They are our future.”

The hosts of the championship – the athletes of Panama don’t look that happy. Now they have two silver medals, but the President of SAMBO Federation of this country Cesar Chu doesn’t hang his head and comments on the performance of his team at this tournament: “It is a good result for us, but we wished, of course, the “gold”. We will draw conclusions, analyze where in the preparation a miscount was made, and continue working on”.

In general, assessing the continental championship this year, he said: “As I expected, the championship turned out to be very exciting. There were only few boring fights, the fighting was very dynamic, with lots of throws, kicks, interesting fighting at the ground. The level of all participating countries is very high, I am sure soon we will be also able to compete with leaders of the modern SAMBO on the world stage”.

Summing up the Panamanian events, among those who should not go unmentioned there is certainly the Nicaraguan team – they have 13 medals in the collection. It should be noted that this result is unprecedented because athletes of this country practice SAMBO for only six months and SAMBO Championship in Panama was their debut.

The teams of the USA and Canada also stole thunder on the Panamanian mats, each of them having won three medals. And, of course, we’d like to mention the first-ever medals of the Chilian and Peruvian teams at continental championships, they won, respectively, the “gold” and “bronze” of the competitions.

The next Pan American Championship will be held in a country that is engaged in SAMBO not so long, only for 2 years. But in such a short period of time SAMBO athletes of this team “found a way” to achieve serious results, and here in Panama the country’s national team won a total of 10 different medals. So, the 2014 Pan American Championship will be met by Trinidad and Tobago – the country famous for its nice asphalt, carnival, beaches, and the invention of the steel drum.

We have no doubt that at the opening ceremony of the 2014 Pan American SAMBO Championship we will hear the sounds of the steel drum invented on the islands in the 30-s of the previous century. Also, we believe that next year we’ll again see a bright, emotional, and exciting fighting in Trinidad and Tobago – the one we watched in one breath here in Panama.

The results of the Pan American SAMBO Championship: