Chongkeum Moon: “Fedor Emelianenko is very likely to be replaced by Kirill Sidelnikov in the international arena” 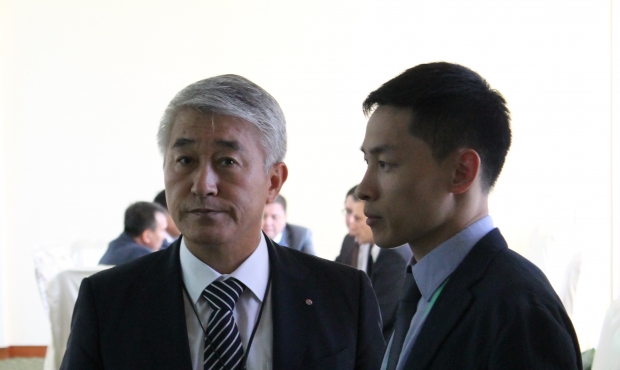 President of Korean SAMBO Federation tells about prospects of SAMBO development in Asia, about new FIAS members and the sportsman, who will replace Fyodor Emelianenko

Mr. Moon, what have you managed to achieve being the head of the East Asia Regional SAMBO Federation and what are you planning to do further?

The scheme of regional federations was introduced not long ago and we don`t have many achievements yet. In East Asia there are many countries, but unfortunately there`re not so many FIAS members. However, it is an important region for SAMBO development in the whole world. We are facing many ambitious targets; first of all, we need to develop a website of East Asia, since it’s the image of the organization. It is very important to develop stable interaction with new federations – the federations of Hong Kong and Macau. In the very near future we plan to host a meeting with presidents of the federations to get to know how the things stand in these federations, what kind of assistance is needed and we will do our best to help and support them. In addition, we plan to hold regional East Asian SAMBO Championships very shortly, in order to boost SAMBO development in this region.

It is known that the East Asian SAMBO Championships can be held in Chinese Taipei in December 2017. Is it so and why was Taiwan chosen to be the venue of this event?

Yes, we have such plans. We tried to hold the East Asian SAMBO Championships in Korea last year, but back then, only Mongolia submitted team entry form with large number of participants. From Japan we were expecting 1 coach and 2 athletes. Due to financial problems, Taiwan could send only one athlete with two officials. So with this significant disproportion it would have been Korea-Mongolia Sambo competition, instead of announced East Asia Sambo Championship. That is why it was decided to postpone the event.

Following that, we started to think over how to the hold East Asian SAMBO Championships in the most convenient way for all participants. At this instant that we came up with the idea to hold the East Asian SAMBO Championships in Taiwan, since this region is very convenient from the point of geography and it is flourishing from the point of SAMBO development.

By holding SAMBO competitions in Taiwan, we plan to promote SAMBO in this region. Taiwan is convenient for all participants, especially for teams from Hong Kong and Macau. These are neighboring regions and there are cheap direct flights between them. In addition, this venue is convenient for Taiwan SAMBO Federation, which will not have to spend money on flight for the whole team. If SAMBO is developed in Taiwan, it will boost rapid development of this sport in both Macau and Hong Kong, since these regions share linguistic culture.

Do you consider Asia the leader in SAMBO development among the continents? If you don`t, are there any chances for the Asian region to become the leader in the nearest future?

It is a very important and pressing matter. I would like to take a different approach in order to answer this question. Asia may not be the leader among continental federations at present, but it is a very important region for SAMBO development. As you may know, there are many other martial arts in Asia, which are traditional and are well developed; moreover, some of them are Olympic sports. SAMBO, while developing in Asia, should compete with them. It is not easy, but it’s possible.

SAMBO in Asia is developed not in all countries, but since there is a large number of countries this fact makes Asia an important region for the future of SAMBO, it`s also important for making SAMBO an Olympic sport. I think that the following years will be critical for SAMBO development in Asia.

In your opinion, which Asian countries have the highest chances to join International SAMBO Federation?

Those countries, who had good opportunities to join FIAS, have already joined it or are in the process of joining – the Philippines, Malaysia, Indonesia, Bangladesh. We are working with China now, but there is a very difficult situation: in fact, SAMBO is already known there and we hope that soon it will be acknowledged. We are also waiting for Cambodia to join FIAS.

In fact, so many things have already been done, yet more is to be done. We need to develop new countries, develop East Asian website, and promote SAMBO in every country.

Let’s talk about the recent fight between Fedor Emelianenko and Matt Mitrione, which Fedor lost. Do you think it was an accident?

Fedor Emelianenko is a very respected person in the whole world not only among SAMBO or MMA fans, but also among all sport fans. I watched live broadcast of the fight and I think that his loss was an accident, Fedor still has both energy and strength, that`s what you need to win. He is still the champion.

Fedor is world sporting legend and celebrity. Who will replace Fedor? Will it be an Asian sportsman?

It is hard to say right now. Why not from Asia or from Europe? This may well be so. However, I believe that Fyodor’s legacy is so great and acknowledged by everyone that one of his trainees, for example, Kirill Sidelnikov from Russia, can replace him. He faced our sportsman at the World Championships in Casablanca. This fight retained in our memories. I assume that Fedor Emelianenko is very likely to be replaced by Sidelnikov in the international arena.

What do you think about the chances of Asian and Korean sportsmen at the World Championships in Sochi?

We have been actively preparing for the World Championships, all Korean athletes train hard. We will do our best to give a worthy performance. I am sure they will not make me blush with shame.