SAMBO birthday: how it was in Kazan, Bucharest and Tokyo 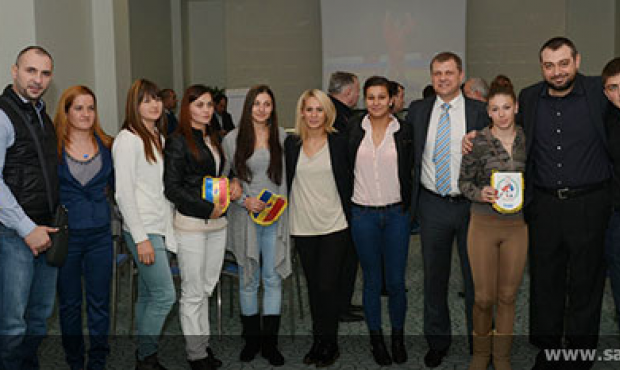 Worldwide SAMBO birthday is celebrated on November 16. It was on this day in 1938 when SAMBO, as a sport, was recognised by the USSR Sports Committee. 75 years later anniversary celebrations devoted to SAMBO were held worldwide. Read in our report today how it was in the capital of the World Summer Universiade – Kazan, a city that will meet the 2014 European Championship – Bucharest, as well as in the country, which will host the next World SAMBO Championship – Japan.

Kazan, where more recently battles of the World Summer Universiade happened, knows, understands and loves SAMBO. This combat sport is actively developing in Tatarstan, and the presence of 7000 fans in the stands of the Tatneft-Arena at the Universiade SAMBO Tournament, says that this combat sport is a priority here. So, on November 16 Kazan celebrated the 75th anniversary of SAMBO. As in many cities of Russia, ceremonial events were held there and SAMBO Championship among youth and girls of the Republic of Tatarstan became their turning-point. Children and adolescents, whose competitions always feature the most striking and emotional fighting, became the center of this festival, which was held at the Batyr Sports Complex. Symbolically, that in translation from the Tatar language “batyr” means: a bogatyr, a hero, a brave man. Over a hundred brave men –16-17 year old boys and girls fought for the title of the best in our combat sport on SAMBO birthday. As a result medals were got by the best, and all participants were endowed with bright shirts with anniversary SAMBO symbolics. Of course, on this day kind words were told and valuable prises were donated to veterans and coaches who have contributed to the development of SAMBO in Tatarstan. Everyone – both the young and the older generation – were in joyful and high spirits on this day, the day of our combat sport. It could not have been otherwise in the capital of Tatarstan, where SAMBO is so loved.

In April 2012 the European Youth Championship was held in Bucharest. 2 years later the Romanian SAMBO management also ventured an adult continental championship. The major European Tournament of 2014 will be held in the capital of Romania in mid-May. Perhaps domestic walls will give strength and motivation to the Romanian SAMBO athletes. Although the current situation in the Romanian SAMBO is that athletes of this country do not need an extra boost. SAMBO is developing rapidly and successfully here, and Romanian female SAMBO athletes of all ages – from the cadets to adults – are permanent “inhabitants” of final protocols of the continental and world championships.

It’s no wonder that SAMBO birthday was celebrated very solemnly and formally in Romania. At the reception in honor of this event at the RIN Grand Hotel representatives of the Ministry of Youth and Sports, the Olympic Committee of Romania, Embassy of the Russian Federation, the Romanian Sports Press Association, managers of sports schools, coaches, as well as the glory and pride of the country – the Romanian SAMBO national team were present.

The warmest words and congratulations on behalf of the present officials and honored guests sounded namely in its address on this day. Viorel Ghyska, the President of the Romanian SAMBO Federation, not only congratulated all the participants, but also told the celebrations participants about SAMBO projects which are conceived and realised in Romania. The Learn To Fall Project already launched in the framework of the Pierre de Coubertain program and joint projects with the International Association of Policemen which are just waiting in the wings to be implemented.

This was SAMBO birthday in the capital of the 2014 European Championship.

It is here – in the Land of the Rising Sun the World SAMBO Championship will be held in November next year. Spectators present at the Yubileyny Sports Palace stands on the final day of the World Championship in St. Petersburg remembered the solemn handover ceremony of the FIAS flag to the representative of Japan – Nobuyuki Asai, the Vice President of SAMBO Federation of this country. Narita, located 60 km from Tokyo, will meet the main SAMBO tournament of the year.

It was in Tokyo where the Japanese celebrations devoted to SAMBO birthday were held. For the first time in Japan, where students’ and adults’ SAMBO competitions have already taken place, Children’s SAMBO Tournament was held. Nearly a hundred young Japanese SAMBO athletes – boys and girls aged under 15 – competed for SAMBO titles, the first ones in their sports career. They will also be able to take part in the first ever World Championship among cadets (athletes under 16 years), which will be held in Cyprus in December 2014.

So, on SAMBO birthday the Children’s SAMBO Tournament determined the first-ever Japanese SAMBO champions under the age of 15. In future the Land of the Rising Sun is waiting for many more activities and events that will be associated with SAMBO. The pledge of this is not only the Japanese national team medals won at the Universiade, but also that unprecedented interest that the Japanese show to our combat sport.