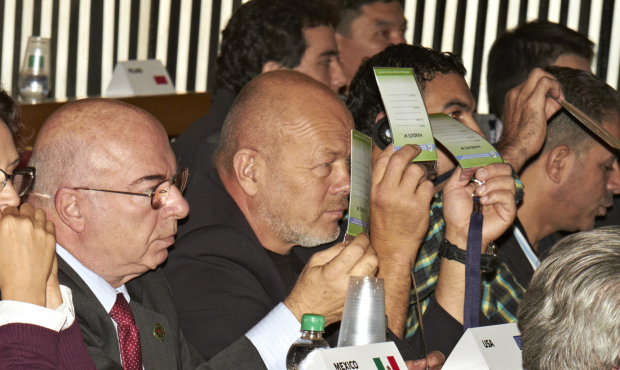 The regular XXIV Conference of International SAMBO Federation was held on a Belarusian holiday, the seventh day of November, on the eve of World SAMBO Championship in Minsk in the building of the Yubileynaia hotel.

At the beginning of the session the participants of the Conference listened to the report of Vasily Shestakov, President of FIAS, wherein the President told in brief about the work performed by the Federation in 2011-2012.

The point of the report was basically the main issue, the Candidate Book of FIAS, submitted recently to the International Olympic Committee. The history of FIAS and SAMBO was stated in details, all the main directions of development of this single combat were described, the strategic project of development of the Federation was represented and different sides of SAMBO promotion in the world today were highlighted in the Book.

It the data from this book that will be considered by the members of the IOC Executive Committee who will take a decision on possible temporary IOC membership of FIAS in December.

The President of FIAS focused the attention of all the delegates on necessity of level increase of holding the SAMBO competitions in his report. Even now a lot is being done in this direction, there is progress represented in many innovations, from doping tests of the sportsmen to the services of the press rendered by mass media at the competitions. All that, including operation of the television, information system of providing the competitions, entertainment and many others appeared now in modern SAMBO but as we know there is no limit to perfection.

Andrey Kliamko, First Vice-President of FIAS, reported on the finances, the budgets for passed 2012 and coming 2013 in particular, thoroughly and substantially. The First Vice-President of FIAS told about establishment of the budget and finance committee of FIAS that will be ready to consider all the applications for material assistance from the Continental SAMBO Federations.

Sergey Eliseev, Vice-President of FIAS, President of European SAMBO Federation told the participants of the Conference about the FIAS competitions calendar for 2013-2016.

The Conference is over and tomorrow weight-in of the first participants of the XXXVI World SAMBO Championship is started who each and all without exception dream to become World Champions. And all the delegates of the FIAS Conference held in Minsk dream that SAMBO would become Olympic sport.