This Matryoshka Doll Will Have a Special Place in My Home 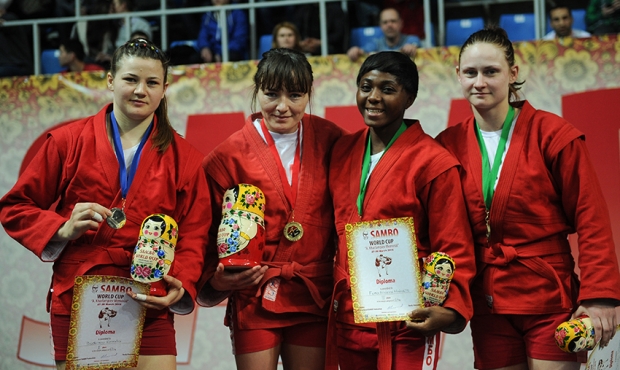 On March 28 there was the second day of the Sambo World Cup Stage “Anatoly Kharlampiev Memorial” held in the Druzhba Sports Arena of the Luzhniki Olympic Complex in Moscow. The FIAS website has collected opinions, emotions and impressions of the participants and now wants to share them with you.

The second day of competitions brought the first gold medal to the French sambo national team. Estelle Friquin won a bronze medal in the women’s weight category under 52 kg. In the interview to the FIAS website she said about the significance of this prize: 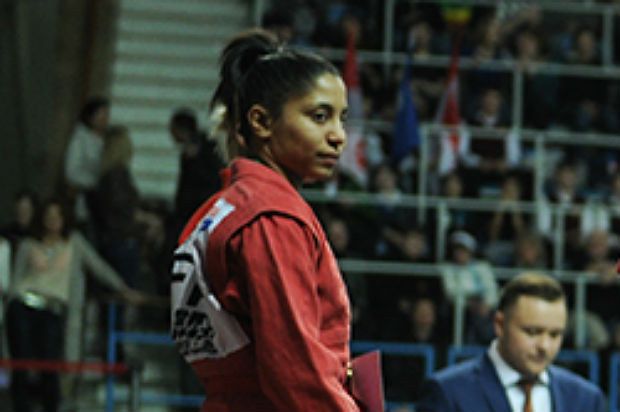 “This is my first medal received in a large-scale international sambo tournament. Going to Moscow I psyched myself up for getting a medal but I didn’t think about its value. Overall, I consider this tournament to be a preparation stage to the European Sambo Championship and the European Games. Baku-2015 is going to be the main event in my sports career. I’ve already gone in for sambo for 10 years, I like this fighting and I’m going to succeed. Now I’ve got the first international medal and a small cup in the form of a Matryoshka doll in my collection. Previously I bought Matryoshka dolls while visiting Saint-Petersburg but this one will have a special place in my home.”

Sayan Hertek (57 kg), the Russian sambo athlete, who beat Yerbolat Baibatyrov (Kazakhstan) in the final combat has become the World Cup winner and also has taken the lead in head-to-head meetings with this sportsman. 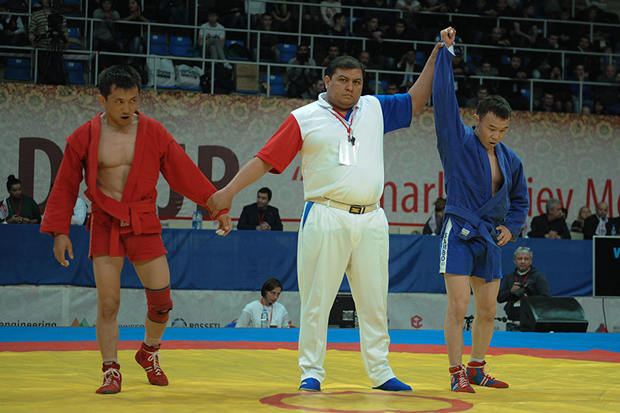 “My rival in the final is a famous sportsman, a four-time world champion. After today’s combat we’ve got a 2:1 score with me leading in the head-to-head battle. I’ve done my best and trained really hard to win this gold medal. I’ve managed to get the desired result,” Sayan Hartek imparted his happiness with us. “According to my plans, my next step is a preparation for the European Championship where I’m going to fight for the gold medal. I’ve been very pleased to see a lot of fans in the grandstands during “Anatoly Kharlampiev Memorial.” The presence of all these people shows our sport is developing. That’ll be great if it enters the program of the Olympic Games.”

Amil Gasimov has brought the gold medal to the Azerbaijan sambo national team as a result of competitions among men in the 74 kg weight category. In the interview to the FIAS website his coach Yagub Abdullaev and he shared their way of getting the winning result. 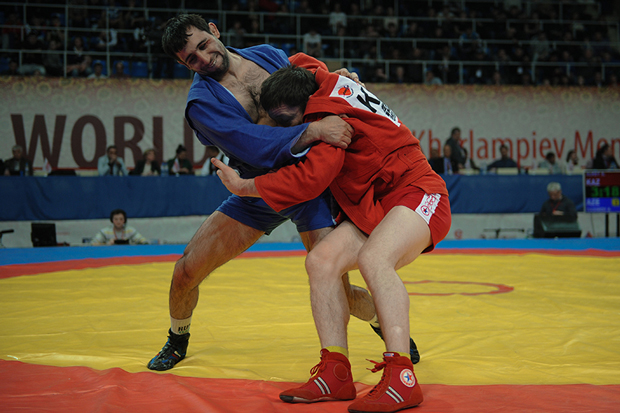 “I’ve worked really hard to get ready for these competitions. I’ve already fought with this rival for three times, and I’ve won only once. I’m proud of the fact that the flag of Azerbaijan will be run up in my honor, and the national anthem will be played. This year each country is allowed to send only one sportsman in each weight category to the World Cup in Moscow. Previously, when, for example, the Russian team sent 4-5 people in each category, it was almost impossible to beat them. Now everyone has a chance to show their skills and strength,” said Amil Gasimov. “In June the capital of our country will hold the First European Games where sambo athletes will participate. We haven’t still formed our team. Probably I’ll manage to win a seat in the team but there are other candidates too. Anyway, the Azerbaijan national team will demonstrate all its skills to the maximum.”

Bayzet Khatkhokhu (74 kg), the Russian sportsman, associates his successful wrestle in the combat sambo final with a huge support of home grandstands. In the interview to the FIAS website he shared his recipe of how to get rid of a buck fever and explained what the cup in the form of a Matryoshka doll symbolized. 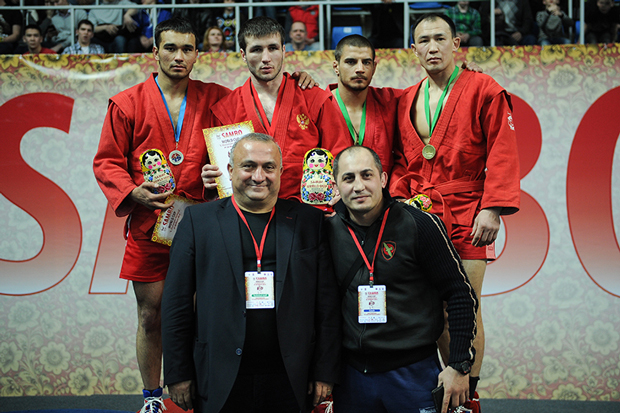 “Before the beginning of a wrestle you can never be absolutely sure of your victory but I was ready and hoped for a great result. I want to thank my coach for the training and spectators for supporting and cheering me up. It helped me a lot and gave additional confidence just at the beginning of a combat. Before the wrestle all sportsmen have a buck fever that needs to be overcome. Professional sportsmen usually get rid of it in about 30 seconds after the start of a combat. But those who can’t cope with it are not able to show all their skills,” said Bayzet Khatkhokhu. “On my way to the gold medal I finished all combats ahead of time, but it doesn’t mean there were easy wrestles. All my rivals are professional and experienced athletes but some of them are luckier than others. Now I’m holding a Cup in the form of a Matryoshka doll. I think it symbolizes the property of our country. It pleases Russians and is a great change for representatives of other countries to better get to know our culture. Many foreign athletes have told me they like this Cup. ”

Bibiene Fopa (64 kg) from Cameroon mounts the podium of large-scale sambo tournaments in women’s competitions not for the first time. During the Sambo World Cup Stage “Anatoly Kharlampiev Memorial” she won a bronze medal. 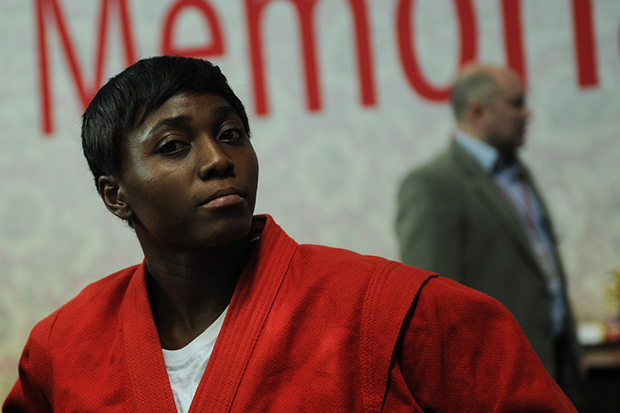 “I aimed at winning a prize, and now I want to train even harder to fight for more valuable prizes. I got gold at the World Championship among students in Cyprus but today’s bronze medal is more important for me since I’ve won it at the competitions without age limits. I’ve competed with real professionals. The competition is higher here, that’s why the medal is more valuable,” said Bibiene in the interview to the FIAS website. “Currently Cameroonian sambo is actively developing. Partly it’s because the African Sambo Championship was held in our country. The event was actively promoted, and, as a result, many people became interested in this kind of sport since they had seen it in the adverts. Apart from this, the development of sambo in Cameroon also occurs due to our athletes’ victories at international competitions. ” Once again I want to fight for medals of international sambo tournaments but at the moment I don’t know where I will be able to participate in the future as it will depend on my study schedule at the university.”

Natalia Kazanceva (Russia) spent for about two minutes on the mat at the Sambo World Cup Stage “Anatoly Kharlampiev Memorial.” This time was enough for becoming a gold medal winner. The point is that there were only two women in her weight category of up to 80 kg. 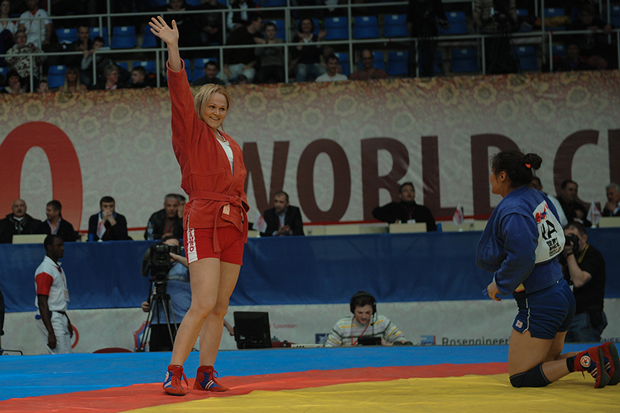 “I wanted to win in a minute but didn’t meet the standard. Of course, it wasn’t difficult for me to beat the competitor. It’s a pity there were just few participants. I had only one combat and immediately became a winner. It appears that you train and get primed for the fight but in the end you need to go to the mat only once. Anyway, now I’m going to prepare for the World Championship in Morocco. I want to recover from the previously received injury.”

As for the men in the weight category under 100 kg, the competition was more serious here. But in the final there were sambo athletes who hadn’t previously met each other on the mat. Davit Loriashvili, the athlete from Georgia, became a winner. He was the one who shared his emotions in the interview to the FIAS website. 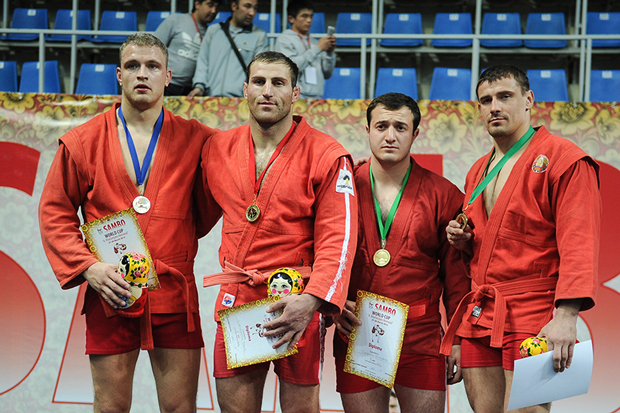 “I didn’t know my competitor in the final, that’s why it was difficult to think out the tactics, so I had to fight from scratch. I want to say that all combats were difficult; each rival needed a separate approach. I managed that and I became the owner of the gold medal at the World Cup. Before that I was the European champion and the World Championship medalist. Thanks to everyone who created a Cup in the form of a Matryoshka doll, I like this idea,” mentioned Davit Loriashvili. “Before entering a mat I noticed that guys from our Georgian Diaspora in Moscow supported me. I want to thank them for this.”

In the final the Georgian sambo athlete competed with Viktors Resko (Latvia) who became the silver prize winner. 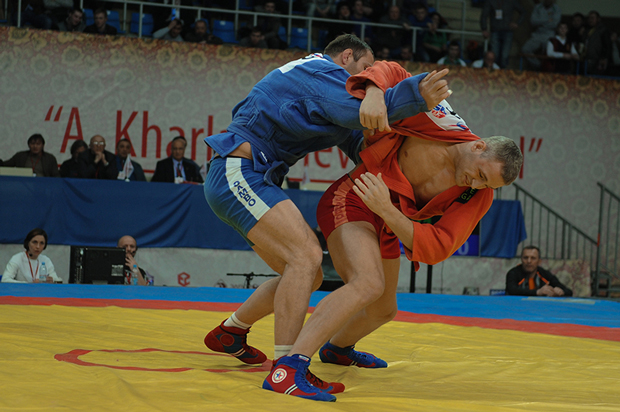 “Of course, I’m a bit dissatisfied that I haven’t got gold but on the other hand I’m fighting for the third time here and now I’ve managed to mount the podium,” said Viktors in the interview to the FIAS website. “My way to a silver medal was hard as I had a strong subgroup, and the final was also difficult. I met my competitor for the first time, so I didn’t know what to expect from him. After the first minute I felt I needed to change my tactics. Before that I expected to use my favorite technique but I didn’t manage to use it. When the wrestle was finished, I understood how I could act but it was too late. The last year was fruitful for me – the third place at the European Championship in Romanian Bucharest, the third place at the World Championship in Japanese Narita, and the third place at the Open Championship in Belarus. And now I’ve won the silver medal at the World Cup in Moscow. I think it’s a success.”