The A. Astakhov Memorial World Cup Stage: the first day 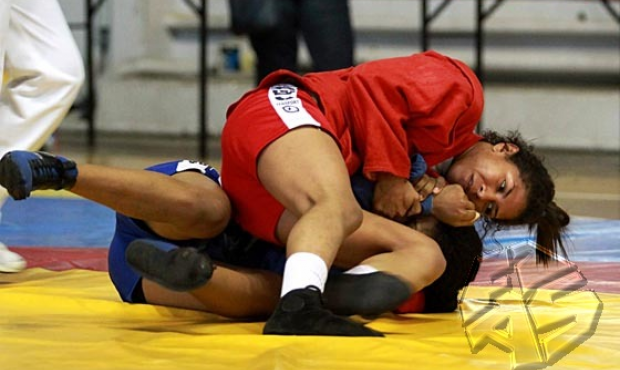 On the first day of the A. Astakhov Memorial World Cup Stage the Venezuelans enjoyed their two gold medals and talked about the rivalry between their team and the team of Russia, which had already turned out to be a fundamental one. The SAMBO founders, in their turn, started powerfully having won six awards of the purest tint at once and confirmed their own status of favorites. However, the hosts of the tournament don’t lose heart, enjoy the medals won and are going to show even better results on the second competitive day.

Maria Guedez and Angelica Valera from the Venezuelan national team raised at the top line of the victory podium in the Belisario Aponte Gym. It is for them that the tenth anniversary A. Astakhov Memorial World Cup Stage, which is held in Maracaibo these days, became a happy one.

In the finals the Venezuelan female SAMBO athlete Maria Guedez showed excellent technique and speed against the Russian Shogik Tsaturyan, thanks to which she managed to win with the minimum difference in the score – 2:1 and become the champion in weight category up to 48 kg.

– I managed to show a good performance, having won three preliminary fights and coming into the finals. In the decisive fight I managed to overcome the resistance of the strong Russian female SAMBO athlete. I think that the fact that I can “go off like a Roman candle” in the fullness of time and demonstrate the maximum, which I’m capable of, played the major role, – admitted Maria after the duel meet finished.

24-year-old Venezuelan SAMBO athlete has already become a four-time winner of bronze medals at the World SAMBO Championship. Today she is ready to perform at the Universiade in Kazan and the SportAccord World Combat Games in St. Petersburg. Hoping to compete for medals at SAMBO home land, Maria Guedez emphasizes commitment to principles of competing between national teams of Venezuela and Russia.

– Venezuela is the leader of the American SAMBO, while Russia – is a recognized “number one” in the world. Therefore, both we and they – everyone is working hard to win face-to-face fights, – shares his feelings Guedez.

Angelica Valera confirms the teammate’s words. The Venezuelan SAMBO athlete gained a convincing victory with a score of 8:0 in the final fight against the Russian Irina Mironova. However, it is this fight that the champion in weight category up to 72 kg called the most difficult.

– The final meeting was the most difficult among the three ones hold today, though I won it with great advantage. I am happy that I’ve won this title, and now will give exclusive attention to preparation for the World Championship in St. Petersburg, – said the SAMBO athlete.