A. Astakhov Memorial World Cup Stage: on the eve of the start 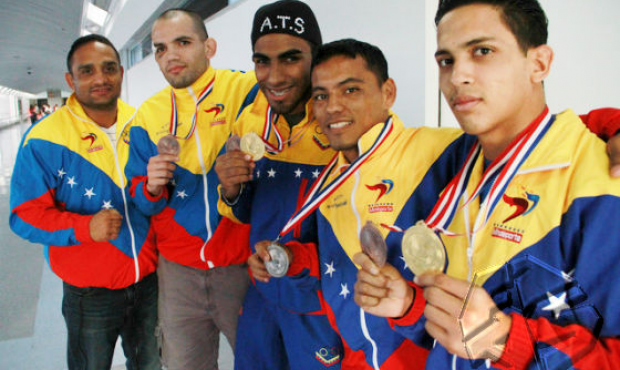 In the Venezuelan city of Maracaibo the final preparations before the start of the A. Astakhov Memorial World Cup Stage competitions are being carried out. In the program of the activities planned for Friday there is a technical meeting and weigh-in in three weight categories for men, women and in Combat SAMBO. In anticipation of coming into the mats the Venezuelan SAMBO athletes are remembering their successful performance at the Pan American Championship in Panama, talking about high competing at this tournament and speaking about the possibility to win medals at the SportAccord World Combat Games in October.

On the days of A. Astakhov Memorial World Cup Stage Belisario Aponte Gym will host more than 350 masterful SAMBO athletes from Armenia, Brazil, Venezuela, Colombia and Russia. According to the President of the Venezuelan SAMBO Federation Viktor Pirela, the participation of these national teams suggests that high competitiveness is expected at the tournament.

– A. Astakhov Memorial always takes place at the highest level. These competitions can be called the most important on the American continent. The national team of Russia, where our favorite sport was founded, moreover in full-strength makeup, also participates in it. And, of course, the Venezuelan national team, who are the leader of the Pan-American SAMBO today. Representatives of other countries also organized themselves no less serious, each of whom is able to make a name for themselves on SAMBO mat, – shares his feelings Viktor Pirela.

Indeed, there are champions and winners of the World and Europe – famous wrestlers, who naturally expect just to win – in the Russian team who went to Venezuela. However, the Venezuelan SAMBO athletes also have a lot to be proud of. The tournament will be attended by athletes who according to the results of the recently held continental championship, won tickets to the SportAccord World Combat Games in St. Petersburg.

– We have just perfectly performed at the Pan American Championship in Panama, which was attended by national teams from 25 countries. Our athletes brought home 12 gold, 2 silver and 2 bronze medals, which proves our competitiveness at the A. Astakhov Memorial World Cup Stage, – said Viktor Pirela.

The Venezuelan SAMBO athletes are also full of optimism, who regard the present tournament not only as one of the World Cup Stages, but also as a part of the preparation for the upcoming SportAccord Games. Sandra Timar, who is the happy owner of the ticket to the Games in St. Petersburg in weight category up to 68 kg, sets her heart in a businesslike manner.

– Now we are working hard to bring medals from Russia. Good preparation – is a passport to success. Therefore, every training session, every seminar and every tournament – it’s all very important to us, – says Sandra.

Endrimar Rodriguez, in her turn, who will also go to St. Petersburg and fight in weight category up to 56 kg, sets her heart to use not only her strength, but also counts on the help of the Almighty.

– Our team obtained a lot of “gold” in Panama. If it’s God’s will, we’ll write our names in the history in Russia too and see the representatives of Venezuela on the podium, – says Endrimar.

While the Venezuelan SAMBO athletes are thinking about the distant future, we’ll be back in the nearest future. As early as on Saturday starting fights of the A. Astakhov Memorial World Cup Stage will be held. The FIAS website follows the course of the tournament attentively.