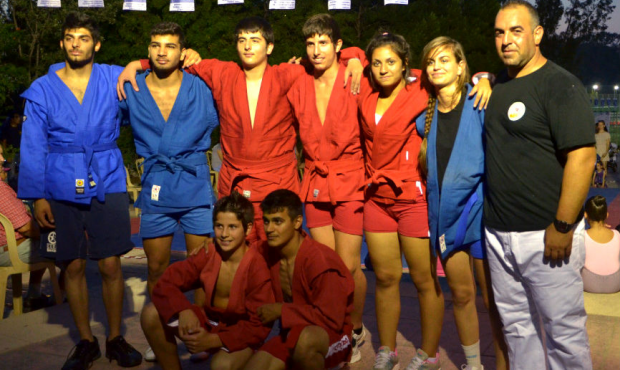 The Republic of Cyprus is an island country located in the eastern part of the Mediterranean Sea. The name of Cyprus derives from the Latin word “cuprum” for copper as the country has been famous for its copper mines at all times.

The ruins of a gymnasium located nearby a classic amphitheatre have survived in the territory of Salamis, the ancient capital of Cyprus. Magnificent marble columns remind us of this. Here the youth were engaged in track-and-field athletics and gymnastics while learning philosophy, literature and other sciences. Today love for sports has come alive again as almost all types of present-day sports are presented in petite Cyprus.

Football is the most popular type of sports. The Cyprus Football Federation (CFF) unites several dozens of football teams of A and B leagues.

Judo and Greco-Roman wrestling can be mentioned as the most developed types martial arts. SAMBO is a new type of sports for the country but judging by the promptness of deciding official matters related to SAMBO, there is a strong possibility that practical part of this martial art development in Cyprus will also not be long in coming. FIAS is anyway expecting a team from Cyprus at the next World SAMBO Championship that will take place in Saint-Petersburg (Russia).

But let’s get back to the achievements of present day. SAMBO has already gained Olympic recognition. Much of it is due to the presentation of SAMBO at the Seminar of the European Olympic Committees that took place in Budapest, Hungary, in April this year. It was Hungary where the Russian citizen Mr. Aleksandr Kozlovskiy, Vice-President of the EOC as well as a member of the Association of the National Olympic Executive Committee, and Mr. Andrey Moshanov, Head of the FIAS Development Department, managed to exchange opinions with the management of the European Olympic Committees concerning nuances of gaining recognition by a certain sport by the higher sports authorities in the countries where this recognition has not been gained yet.

Cyprus was in the list of countries that responded to the appeal of FIAS to support SAMBO in Europe. And the results were not long in coming.

And what are the perspectives?

“At the present time the NOC of Columbia has given so far a temporary, 6-month recognition to the Columbia SAMBO Federation. The Mauritius, Trinidad and Tobago, Barbados SAMBO Federations (all these countries are members of the British Commonwealth) are also at the final stage of gaining recognition by their National Olympic Committees. We expect to receive official documents that confirm this essential for the International SAMBO Federation fact by the end of this year.

Thus, the number of countries that gained Olympic recognition may reach five in 2012”, comments Andrey Moshanov, Head of the FIAS Development Department, on the work of the Department.

It should be mentioned in conclusion that in 2011 SAMBO athletes from 53 countries participated in World SAMBO Championship that took place in Vilnius (Lithuania). In Minsk (Belarus) providers of the competition expect to welcome sportsmen from 55 countries that cultivate SAMBO worldwide.

Judging by the efficient work of FIAS on expanding the number of SAMBO Federations in the world and their Olympic recognition, this number has all chances to increase to 60 countries.