How it was shot: Sambo video for SportAccord Games 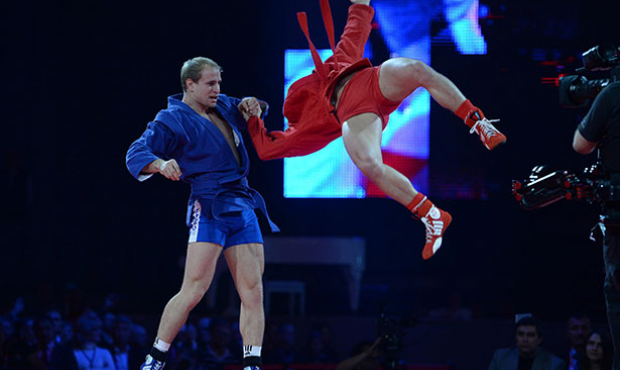 First of all, this video became the Sambo visit card at the II SportAccord World Combat Games, and then in no time it was viewed by thousands of people at YouTube. Spectacular exhibition performances of Ivan Morozov and Aleksandr Perepelyuk became popular long time ago. Every their entry to the mat and demonstration of Sambo technique arouses heightened interest among spectators. Now thanks to this creative video all sambo supporters have an opportunity to view regularly and review sambo actions executed by these men. We are going to tell how this video was shot.

The Sambo video premiere shot by SHANDESIGN Studio took place on October 18, 2013 in Saint-Petersburg at the solemn opening ceremony of the II SportAccord World Combat Games. Spectators present at the opening ceremony had to be attentive: they had to watch not only the video at the big screen, but to follow the exhibition performances of Ivan Morozov and Aleksandr Perepelyuk, who at that moment demonstrated some elements from the video at the stage. However, spectators managed to follow both events. All Sambo supporters would remember that sambo presentation for a long time.

As the main characters of the video told, the shooting started just several days before the opening ceremony at the Lenfilm studio. Despite cold autumn weather outside and chillness in pavilions, sambo athletes felt really hot just after several minutes after the shooting start.

– We immediately found a common language with the shooting team. Therefore the whole process was quick and easy. We were demonstrating sambo actions during several hours, and the team made their work to present this process as a real art on the screen, - tells Ivan Morozov. – We were not tired because of shooting; even on the contrary we received a lot of cheerful emotions, especially as the process took a little time. When we watched the final result, we were definitely satisfied.

"Therefore the whole process was quick and easy. We were demonstrating sambo actions during several hours, and the team made their work to present this process as a real art on the screen"

The Sambo video was included into the series of sports and creative videos about combat and martial arts. Their makers were the Film Director Sergey Shanovich and the Creative Producer Dmitriy Dermev co-authored by the Operator Stas Sharkov. The creative group told a lot of compliments addressed to professionalism of the FIAS demonstration group and noted that there was almost no need in rehearsals before the shooting.

– When I was a kid I used to practice judo in Dinamo club and enviously looked at trainings and competitions of adult sambo athletes as there was combat sambo in the club. At that time it seemed something very exciting. Apparently, that’s why I’ll keep admiration and inner respect to sambo for the rest of my life. I think, this forms the right attitude to martial arts and helps at work, - tells the founder and manager of SHANDESIGN Studio Sergey Shanovich.

It should be noted that one more sports video was shot starring Mikhail Martynov and Ivan Morozov. This video presented the kind of sports and was broadcasted during competitions along with the address of the sambo ambassador Fedor Emelianenko. This video can be watched soon at the FIAS video channel at YouTube. Subscribe to our channel not to miss anything!