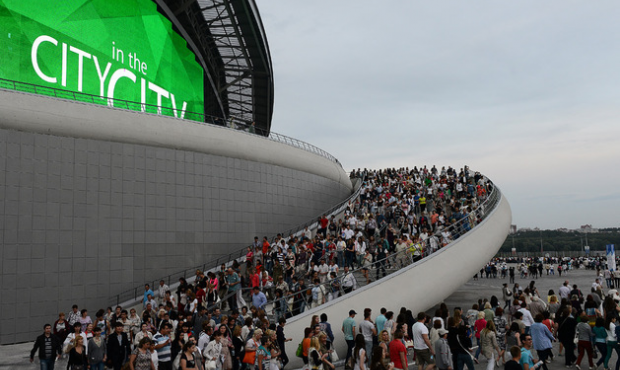 While SAMBO athletes from around the world have active training sessions and prepare to the competitions on Universiade in Kazan, the organisers of the Student Games held their rehearsals and preparations. Ambitious exercises “4 days of Universiade”, which were carried out in Kazan during several weeks, resulted in testing of the Opening Ceremony of the XXVII World summer student Games 2013 on the “Kazan Arena” football stadium. The Organising Committee checked not only coordination work of the events, but also trained actions in emergency cases, evacuating 3000 people in 5 minutes.

During Universiade Opening Ceremony exercises were tested such services as sportsmen transfer from Universiade Village, transportation of guests and spectators from the so-called “clear zones”, where the representatives of the different clients’ groups will be screened before transferring to the stadium. Thereto the screening was organised simultaneously in several “clear zones”, from where the spectators were transported to the stadium by special shuttles.

One of the most discussed questions in the nowadays Kazan is the necessity of blocking off city traffic during the Games. The organisers say that this measure will be necessary only in the days of opening and closing of Universiade, but citizens are worried as before and keenly discuss this measure. During the held exercises the traffic was partially blocked off on the Pobeda prospect. But because of the traditionally low Saturday traffic, this blocking did not arouse additional problems on Kazan roads. The organisers hope that everything will be also trouble-free during the Games.

It should be separately mentioned about volunteers. Due to the FIAS site, they are not only full of enthusiasm for the fulfillment of their work, but also became the real professionals in their field. In testing frames special attention was paid to the spectators’ streams regulation, carrying out by “Kazan 2013” volunteers. The results of exercises showed that thanks to the Universiada organisers voluntary helpers in the bright-red uniform the spectators would be able easily find their places in the huge stadium.

The fact that fans’ information will be on the high level was again confirmed during communication quality testing. In particular, Tatarstan journalists were able to check personally the quality of the services in the General press-centre, and also on the media tribunes, where the equipped seats for the accredited mass media representatives were organised, including the possibility of connection to the wired Internet.

“The evacuation of the spectators because of the emergency situation” became the main stage of the exercising on the “Kazan Arena” stadium. About three thousand people were evacuated in less than 5 minutes. The exercises confirmed that Kazan is practically up in arms to the Games, and it means that SAMBO athletes will be able to show their best results, taking their minds off domestic problems.

By June 29 the Village of the World summer student Games will be officially opened, and will accept sportsmen from 162 countries. On July 5 the first competitions will be carried out in frames of the Games sports program, on July 6 will be held the grand Universiade Opening Ceremony. Games on the 27 sports categories will be carried out during 12 days and finish on July 17. SAMBO athletes will compete on Kazan Universiade from 13th to 17th of July.