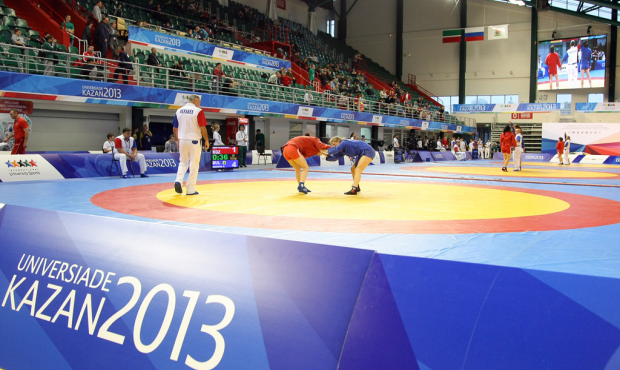 The Universiade-2013 precursor – SAMBO World Cup among Students – took place on December 1-2 in Kazan. The participating students have first-hand knowledge of the exams, but before the World Student Games not only athletes but also organisers of the tournament had to take exams. Just like real students, they were worried before the starts, trained day and night, and as a result coped with the serious task brilliantly.

Students from all over the globe came to take an exam – 202 SAMBO practitioners from 40 countries. Among them there were both SAMBO postgraduates who achieved serious results in international sports and academic activity, and first-year students who successfully graduated from school of this martial art and now aim to receive higher SAMBO education.

The peculiarity of this exam was the opportunity to use ‘cribs’ – prompts from the volunteers that accompanied every team. Sure, during the combat on the mat, cribs can be of no help. However, the role of volunteers cannot be overestimated in finding one’s way around in a foreign city, how to find one’s way, where to eat, and where to train.

The most outstanding students according to the results of the exam were SAMBO practitioners from Russia who won 15 medals altogether, 9 of which were gold ones. The representatives of the Ukraine made a good showing – the team won 3 golds. The gold success of Kazakhstan, Turkmenistan, Bulgaria, Israel and Belarus should also be noted. Good students from the Celestial Empire deserve special attention – the Chinese showed remarkable results having won a silver and a bronze.

Unfortunately, not all strong teams could take part in the tournament. The teams of Uzbekistan and Mongolia that used to be regular winners of large-scale international tournaments didn’t come to Kazan, so now they have failed exams which they will have to take in front of the strict board of examiners in summer – at the Universiade-2013.

By the way, the board of examiners consisting of fans on the stands and viewers of online broadcasting on FIAS website was strict but fair. It’s hard to say how the viewers behaved in front of their computers, but the fans’ reaction to what was happening at Ak Bars Wrestling Palace showed that they are quite competent in SAMBO.

SAMBO came to take exam in Kazan together with its family – support team represented by SAMBO International Federation (FIAS). Together they prepared for this winter exams thoroughly studying theory and practising in holding competitions of the top level. It’s no wonder, as the representatives of the dean office - the International University Sport Federation (FISU) - were present at the World Cup.

This fact is confirmed by the words of one of the examiners – Oleg Matytsyn, the FISU 1st Vice President, President of the Russian Student Sport Union:

– First of all, I’d like to congratulate the Republic of Tatarstan, the organising committee and the SAMBO International Federation on such a tournament, Matytsyn noted. – The organisation of the Cup meets the international standards. It is very important that the first SAMBO competitions under the auspices of FISU took place here in Kazan as a testing event before the Universiade. Over 200 athletes from 40 countries arrived, which is the evidence of SAMBO popularity. This sport was justly included into the programme of the World Universiade.

FISU didn’t put marks for the exam, but the ‘pass’ note will definitely be made in SAMBO record book. Of course, there still remain some ‘rough edges’, as this World Cup among Students was the first common tournament for FIAS and FISU. However, the experience received and the time left before the start of the Universiade make us believe that summer exams will be a success.