“It’s Good That First Start of Season Be a Success” 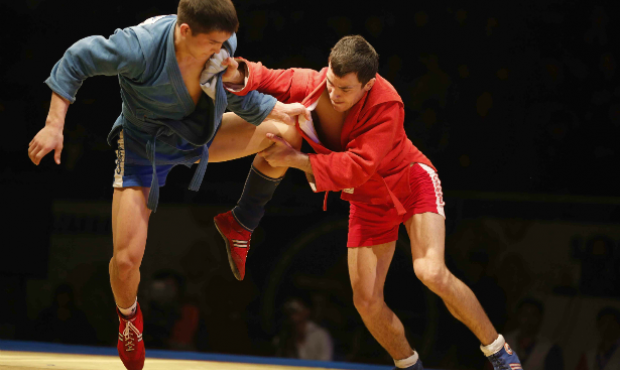 The stage of the World Cup for the prizes of President of Kazakhstan Nursultan Nazarbayev has become a historic event. The first tournament of the season in the FIAS international calendar traditionally sets the tone for the entire year. Judging by what we managed to see in Almaty, the coming Sambo year will be filled with sports sensations, attainment of a qualitatively new level of the organization of competitions and the continuing increase of spectator interest.

The Sambo community has already called this year the Asian one. The 2014 World Championship will be held in Japan, the world youth championship will be conducted in Korea. That is why for many people the Kazakhstan stage of the World Cup has become a kind of rehearsal for the upcoming travel to the East. Suddenly it has become clear that such jetlag badly affects many famous Sambo athletes, including world champions and winners. First-rate favourites lost on the mats of Almaty as if they were sportsmen who tried their hand for the first time, but not the titled Sambo athletes. Knockout of champions at the initial stages, and even in the first round of the tournament has almost become the trend of the last stage of the World Cup.

Knockout of champions at the initial stages, and even in the first round of the tournament has almost become the trend of the last stage of the World Cup.

However, such sensations only increased the audience appeal, which attracted spectators to the stands and TV screens. The tournament was broadcast on Kazakhstan national television channel, and is constantly available on the FIAS website. Those who have already seen the record of the matches or photos from the event have also noticed a change in the colours of the mats. Red outlining of the circle has become thinner and actually turned into a line, and the FIAS logo is now available in the center. This type of the mat today is experimental and intended to improve the quality of television pictures and increase television attention to Sambo. This is an important and necessary condition for inclusion of a sport in the Olympic program.

Drive appearance of Sambo athletes at final fights has become another feature of the tournament, which could not be left unnoticed. The way of Sambo sportsmen to the mat in Almaty turned into a real show thanks to music increasing adrenaline, spotlights cutting through the darkness around the mat, and close-ups of opponents on the telecube above the site. Along with coaches, athletes were accompanied by girls in national costumes, who carried signs with the name of the participant’s country. During a fight we asked one of them whether she supported a representative of Kazakhstan or a Sambo athlete from Russia, whose sign she was holding in her hands.

"All the girls cheer for those they accompany, so now I am for Russia".

- All the girls cheer for those they accompany, so now I am for Russia, - Asema said. - We even have a small internal competition: who will have more winners. I am lucky, as I am still in the lead, but the fight is still on.

We did not manage to find other Kazakhstan fans that did not support their athletes at Baluan Sholak Palace of Sports and Culture. Audience support of Sambo could be felt both during the fights, and the awards ceremony. From the very beginning of the national anthem of Kazakhstan in honour of the winner all citizens of this country, regardless of their role in the tournament, put a hand to their heart and almost all of them sang the main song of their country. It was especially interesting to watch the security officers who cordoned off the point where the VIPs sat. As soon as they heard the anthem, the guards turned in unison toward the flag of Kazakhstan and put a hand to their heart. At that moment, it seemed that everyone could pass by them, but no one even tried to do so as all the rest were busy with the anthem as well.

The anthems of Russia and Kazakhstan sounded most often during the first stage of the season of the World Cup, but some countries managed to vary the musical program of the awards ceremony. The spectators and competitors heard the anthem of Belarus for two times, and the main songs of Mongolia, Kyrgyzstan and the United States sounded once. Accordingly, the national team of Russia won the event, Kazakhstan was a second-place winner, and Belarusian Sambo athletes came third in the tournament. As for personal achievements, let us mark out some athletes.

In the final of the category of up to 100 kg Russian Dmitry Eliseev won an early victory over Ukrainian Sambo athlete Yaroslav Rytko. However, the Sambo athlete admitted that he had not even known who would fight in the finals:

“I did not follow any of the competitors during the tournament".

“I did not follow any of the competitors during the tournament, – Eliseev said. – First, I do not know anyone here, and, secondly, it confuses me on the mat. Instead of thinking about the opponent, I’d better make efforts to improve, get ready for the fight and do my best. Of course, it is good when you know something about your opponent, but I did not care about it this time. And even when I reached the final, I did not know who I would fight with.”

In contrast, female representative of the Russian national team Anastasia Shinkarenko told that she managed to win the victory over the current European champion Katerina Prokopenko from Belarus in the final thanks to competent analysis of mistakes made by the latter earlier.

“This is not the first time when we meet and I am very glad that I managed to win, because I have lost the previous fight, - said Ms. Shinkarenko. – But after that failure I and my coach made the right conclusions and corrections of mistakes. It’s good that the first start of the season be a success. Now I will make ready to perform well at the stage of the World Cup in Moscow, which will be held in March.”

"It’s good that the first start of the season be a success".

Certainly Romanian Sambo athletes will try to consolidate and improve their success. Daniela Hondyu and Gabriela Tascu have become silver medalists in the tournament in Kazakhstan. Despite the fact that they looked somewhat frustrated with their defeats in the finals, both their coach and President of the Romanian Sambo Federation Viorel Gyske said they were pleased with the results. According to the President, training of the Romanian national team to the European Championship will be continued in the near future. The Championship will be held in Bucharest in May. And most important challenges are issued before the national team – they need to win as many medals in their home country as possible.

In contrast to the Romanian girls, German Sambo athlete Björn Bachmann was satisfied with his result of the stage of the World Cup in Kazakhstan. He came third in the weight category of up to 100 kg in combat Sambo.

- I feel that I started fighting better than before. I am very happy with my first fight, which I won, but at the same time I understand that I still need to practise a lot, - Björn said in his interview to FIAS. – I am not surprised that the organization of this tournament was at a very high level, as I know well that the Sambo Federation in Kazakhstan works fine. As for the sports part, I have good impressions of it...

"I feel that I started fighting better than before".

When saying this, the German Sambo athlete pointed at his black eye – the mark of the recent fights. It turned out that Björn Bachmann has come for the tournament in Kazakhstan for the sixth time, but it was the first time when he visited Almaty.

- I and my teammate arrived in Kazakhstan in advance, so we had some time before the start of the competition. Using a map, we saw that we were close to Kyrgyzstan, so without hesitation we made up our minds to travel to this country. On the Internet I found that no visa is required for us to enter Kyrgyzstan, so I booked a hotel in Bishkek, and we took a taxi to reach the border. Along the way, an idea crossed my mind: "We might have some problems at the border, because our visa to Kazakhstan assumes only one entry. If we leave Kazakhstan, will we be able to come back?" But I soon forgot about it, - the athlete says. - The trip was great. It was snowing and raining, but I liked it! At the border we were told that we could go to Bishkek, but if we wanted to return, we needed a new visa to Kazakhstan. We tried to call the embassy, but without result as it was too late. So we decided to stay in Kazakhstan. We stopped in a town close to the border, ate some barbecue, drank tea, and then stayed in a hotel in the nearby village and went back to Almaty. Landscapes along the road evoked positive emotions. It was great! Perhaps thanks to this discharge and I managed to win a medal in the tournament.

"The trip was great. It was snowing and raining, but I liked it!"

Every athlete has his or her own training system, which allows achieving a particular result. It should be noted that in Kazakhstan the ace of aces not only won gold medals, but were awarded with special money prizes (3,000 dollars). Belarusian athlete Andrei Kazusenok won The opening of the tournament nomination, Russian sportsman Sergey Kiryukhin was awarded for The Will to Win and Kazakh Arman Ospanov won the prize for the best technique. Kazakh Sambo athlete Erbolat Baybaturov was named the best sportsman of the tournament who won the main prize – a car.

- This was the first time when we held a Sambo tournament of such a rank and we did our best for all the participants and guests to be happy - President of the Kazakhstan Sambo Federation Saken Meyrbekov said. - I hope our beautiful city will evoke positive emotions in them. We will try to take all the nuances into account when planning the next year's tournament and will do our best for the competition to be held with more countries, and at a higher level.

President of the Asian Sambo Union Alamzhon Mullaev looked to the future as well. He noted the rapid development of Sambo in Asia and arising opportunities from it.

"I must say that Sambo is now booming in Asia".

- I must say that Sambo is now booming in Asia, - Alamzhon Mullaev said. - The Championship and the World Youth Championship will push Sambo for further progress, including the first steps in those countries where it is not present yet. And, of course, the most important issue that we have decided this year is the recognition of our sport by the Olympic Council of Asia. This is a historical success, because it gives us splendid opportunities in many areas, the main of which is the recognition of Sambo the Olympic sport.

So the Sambo season started at a very high level. The Asian Sambo Year promises to be eventful and fruitful. Competition is intensifying and the audience appeal is growing. And we are lucky to see all this!