International SAMBO Federation Congress in St Petersburg: to be continued 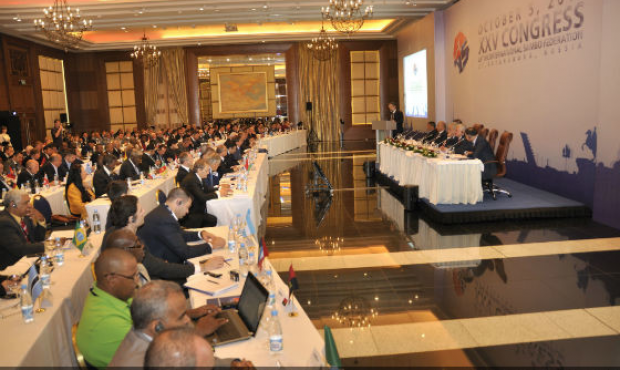 Following the election of Vasily Shestakov as President of the International SAMBO Federation (FIAS) with an absolute majority of votes, it was time for the newly elected FIAS leadership to get to work. There was talk of adopting a new FIAS Code of Ethics, making amendments to the FIAS Charter and 2014 sports calendar as well as the upcoming Cup of the Russian President for SAMBO in the UK in 2014. For more, see our report today from the Corinthia Nevsky Palace Hotel in St Petersburg.

The FIAS Code of Ethics, which governs the moral and ethical aspects of the Federation’s activities, was approved and unanimously adopted by all the delegates of the XXV Congress. This was followed by a discussion of amendments to the FIAS Charter that were considered by a special FIAS committee and submitted to the St Petersburg congress for debate. All the delegates unanimously accepted the much needed amendments to the FIAS Charter.

The 2014 sports calendar may also be topped off with another event for which a presentation was made at the FIAS Congress by British Commonwealth Sambo Association President Lord Simon Reading. All the congress participants reacted enthusiastically to the idea of holding the Cup of the Russian President in the UK and expressed support for this project. The plan is to hold the tournament with the great name in October 2014 in the historical centre of London – Old Billingsgate. With this the congress completed its work.