The SportAccord Convention in Sochi: the meeting of the FIAS management with the representatives of the International Olympic Committee 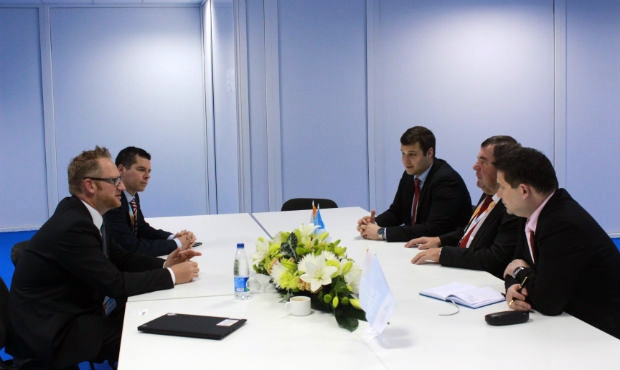 Today an exhibition was launched in Sochi which along with its more than 270 participants from the world of sports, business and media also counts with the participation of the International Sambo Federation. On the eve of the opening of the exhibition a meeting of the FIAS management with the representatives of the International Olympic Committee took place. FIAS President Vasily Shestakov and the Director of the FIAS office in Lausanne Michal Buchel met the IOC Sports Director Kit McConnell and Director of Relations with the International Federations, Christian Wassmer.

The meeting was held in a very warm and friendly atmosphere. FIAS President told the representatives of the Olympic movement about the recent successes and achievements of sambo and about the next steps for the development and promotion of this sport in the world. The IOC representatives paid special attention to the achievements of FIAS on the interaction with WADA and anti-doping work, as well as the inclusion of sambo in the program of the European and Asian Games.

The successful interaction of FIAS with FISU and the development of student sambo did not go unnoticed either. The IOC representatives didn’t fail to notice the expansion of geography of the World Sambo Championships (St. Petersburg in 2013, Narita in 2014, Casablanca in 2015), the increasing number of national federations that are FIAS members and expansion of the medal geography (at the World Cup-2014 medals were conquered by sambists from 22 countries).

Representatives of the IOC informed the FIAS management on the fate of its application. If necessary, the IOC will hold a series of further consultations with representatives of FIAS that will focus on the document’s completion.