2013 SAMBO Cup of the President of Russia: Russian SAMBO athletes are expected to have the fate of English football players 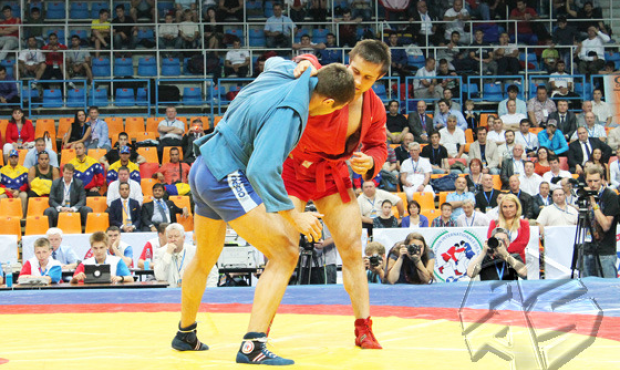 This year, anniversary for the combat sport, famous as the World Team SAMBO Championship, the Cup of the President of Russian has mastered a new format. The tournament organisers decided to “recreate” the Union Championship, having invited teams from the former Soviet republics as participants. Read in the report about the VII SAMBO Cup of the President of Russia, which was held at the Druzhba Moscow Sports Centre on June 7, on the FIAS website what has come out of it, and what has it to do with the English football players.

Traditionally, teams from 8 states take part in the SAMBO Cup of the President of Russia. This year the number of participating countries remained the same, but the number of teams was reduced to 6. The reason for this was the union of the representatives of Lithuania, Latvia and Estonia in the same group, under the conventional name the Baltic States. Reduction of the team number had an impact on the tournament layout. Russia and Belarus passed the first preliminary round and expected their future opponents already in the semifinals. But teams of Armenia, the Baltic States, Moldova, and Ukraine had to fight among themselves for getting into the next stage of the tournament.

The match meeting of the Ukrainian team and the Baltic States united team appeared to be almost a classic opposition of experience and youth. Weathered in many fights on the European and world wrestling mats the Ukrainians came together in face-to-face duel meet with young and early Balts, who have yet to make their athletic feats. However, it worth doing justice to SAMBO athletes from Lithuania, Latvia and Estonia – their diligence and perseverance are to be envied by many even during the most difficult meets. However, the Ukrainian representatives’ skills and experience still outweighed the youthful excitement of the Baltic states.

But the juvenile fervour of the Moldavian SAMBO athlete Yura Semykin rightly charmed the audience of the online webcast of the SAMBO Cup of the President of Russia on the FIAS website. Just imagine: at match meet the Moldavian team yielded the Armenian team with a score of 0:8. The last duel meet of the match is carried out, which can’t affect the overall outcome. However, the young heavyweight Yura Semykin comes out to prevent whitewash and, in football parlance, to score “a consolation goal”.

Yura has more than enough passion and desire, that’s why he wades into his opponent with renewed vigor, however, as it seems, without any particular strategy or tactics. An experienced opponent calmly counterattacks the Moldavian heavyweight and in the battle the score reaches 0:11. It is time to call Yura’s performance bright and dignified, as well as to write off the result on his early years. However, when all around are deciding that everything’s over, the Moldavian SAMBO athlete sets the Thames on fire. He again attacks his rival and all of a sudden does him a painful arm lock. Flawless victory!

- I have long wanted to visit Moscow, and, of course, come into the wrestling mat against a Russian SAMBO athlete. Today, my dream has come true by half – in Moscow our team managed to get into the semi-finals and meet with the Russian team. But it means that I have left the incentive to train, to work on myself to have an opportunity to compete with masterful rivals at the next tournaments. In the meantime, we have some free time, I have a chance to see the Red Square, – said Yura Semykin in an interview to journalists.

This beautiful victory has no effect on the overall result, so further enthusiastic audience is already watching the current opposition in pairs Russia-Armenia and Belarus-Ukraine. Semi-finals are turned to be not similar to each other.

The Russians meet stout resistance on the part of the Armenian team already in the first fight, which is known to set the tone for the whole team meeting. Long standoff of the debut duel meet still ends up in the victory of the Russian representative. Then, the Armenian team seems like broken, though, it tries to resist. But the Russians have bid up the pace and masterfully win with devastating totals 9:0.

The Belarusians and Ukrainians’ fighting is much more intense. Their opposition takes place in the style of the infamous “swing”. Rivals meet each other with victory for victory, a painful lock for a painful lock, a throw for a throw. When only 3 duel meets left till the end of the match meeting, and in addition the score is equal – 3:3, there isn’t only a skills check but also nerve hardiness check. The Belarusians, who win with a final score of 6:3, pass the check luckier than others. However, the price for this victory is expensive – one of the Belarusian SAMBO athletes gets a serious injury, which means that he can’t help his team in the finals. Thus, the Belarusian team started the final meeting with the score minus one.

However, the finals and fighting for the Cup – these are the events of the evening program. Previously we should define the bronze medal of the tournament. The Ukrainian and Armenian teams have engaged in this noble cause, previously defeated in the semi-finals. Now, some of them have to win the “bronze”. In the early match meeting it seems that the opponents are equal and the fighting will be long and hard. However, as is often the case, one meeting tips the beam of the opposition, which becomes a turning point. This time victorious scale inclined to the side of the Ukrainian team, who eventually became the bronze winner of the tournament.

In the evening, a spectacular action awaited the Druzhba Universal Gym Hall and the TV audience who watched an online webcast on the FIAS website. The solemn opening ceremony began with striking and memorable representation of the participating countries. Then the floor was taken by the distinguished guests of the tournament. Deputy Prime Minister of the Russian Federation, Dmitry Rogozin, who has recently joined the Board of Trustees of the All-Russian SAMBO Federation, said that the sport is actively developing all over the world and called on Russian athletes to be prepared for the fact that soon they will have very masterful rivals.

– Englishmen are considered to be the founders of football, but not always win at the international tournaments. Russia is SAMBO motherland, but if in due course someone in the world would be stronger than we are, don’t worry. It would only mean that people like SAMBO and are actively developing in many countries, – said Dmitry Rogozin.

The FIAS President Vasily Shestakov told on the current state of the SAMBO development. He stressed that this combat sport has already been included in the program of many international multi-sport events, including the 2013 Universiade and the SportAccord World Combat Games as well moves to join the IOC Olympic family step-by-step. The President of the European and All-Russian SAMBO Federation Sergey Eliseev reminded the fact that the current SAMBO Cup of the President of Russia is carried out in the SAMBO anniversary year, to the participants and guests of the competitions. Head of the Moscow Sport Committee Department Aleksey Vorobyov wished sports and life victories on the audience, then officially declared the tournament open.

The final meeting of the national teams of Russia and Belarus became the adornment of the competitions. SAMBO athletes from these teams, well-known to each other, perfectly imagining the each other’s abilities have once again agreed to measure strength to the delight of the audience. Of course the favorite was the Russian team, who always set only the maximum tasks for themselves. The Belarusians hoped that will be able to catch and drag the tail of luck on their side somewhere. At the same time the audience was in the mixed feelings: some were expecting a sensation, but most just wanted to see the confirmation of the Russians’ champion ambitions. Despite rooting for different teams, they were satisfied exactly in a single component: it was a really entertaining and intense fighting.

Final score 8:1, perhaps, not fully reflect the essence of what is happening on the mat. Objectively Russian SAMBO athletes were stronger and once again won the Cup of the President of Russia deserved. However, the fight did go on an equal footing, and Belarusian SAMBO athletes proved themselves worthy rivals. However, it is known from the Soviet era that SAMBO is well developed in these countries. But if SAMBO will continue to develop around the world at the pace it has gained today, then it is possible that in the near future today’s favorites of this combat sport will have many common themes with English football players.