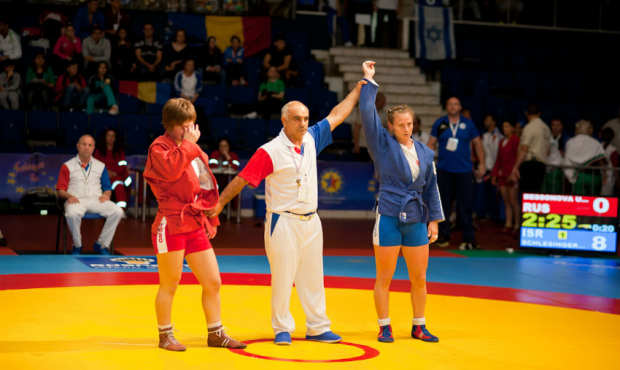 Last weekend the European Sambo Championship took place in Bucharest, the capital of Romania. The Sambo tournament of the Old World conquered and surprised with its records - for the first time it was attended by athletes from 35 European countries, medals shared by Sambo athletes from 16 states, and sensations - many leaders have not got to the finals, and "discoveries" of the tournament reached the podium.

The hosts of the tournament, the Romania national team, broke the European medal record of the country and won 3 bronze medals for their fans compared with only one last year bronze medal. Success of Romanian Sambo is obvious. The Head of European Sambo Sergey Eliseev will tell us about the way how President of the Romanian Sambo Federation, and part-time head coach of the Women's National Sambo Team Viorel Ghyska: “If we talk about Romania, Viorel started with the basics, and started very correctly. He went the right way. He recruited children to systematically and seriously bring them up. Then I warned him that he would have no medals for 7 to 8 years, but it must be overcome. So he did, and as a result he has 3 bronze medals as of today. And the most important thing is that he has a strong, friendly and growing team of like-minded people, in which each individual athlete is a leader, and together they are a unified whole”.

The Latvian team’s “piggy bank” was also full of bronze medals. There is an interesting fact. Being a judo athlete, Vsevolod Zelyony, President of the Latvian Sambo Federation, won a European bronze medal here, in “Sala Polivalenta”. Now, 10 years later, athletes under his charge, whom he emotionally, but professionally supported from the podium, won medals of the European Sambo Championship their country needed so much.

Not only athletes set records in Romania. Moldovans participated in the European Sambo Championship for the first time. But not athletes who joined the Sambo family long ago, and Moldovan musicians, the world famous band “Zdob si Zdub” that took part in the Eurovision Song Contest in 2005. 9 years later they accepted the proposal of the organisers with pleasure to brighten up the European Sambo Tournament with their music, as well as infect the audience with their drive and energy.

Athletic and charismatic giant, 100-kilogram Bjorn Bachmann won the silver medal here for Germany. Unfortunately, he did not take part in the final due to injury, but his name was definitely written in the history of German combat Sambo.

Acknowledged leader of French Sambo Laura Fournier failed to win in the championship. Unfortunately, the winner of the silver medal in the last year's tournament and the star of the French team was unable to compete in Romania. At the very beginning of the tournament she was sensationally defeated by an athlete from Belarus. But her teammates, combat Sambo athlete Charlie Schmitt and petite, 52-kilogram Estelle Frikvin managed to grab the “Feather of Sambo Firebird” and won silver and bronze medals respectively for the country of fashion.

Sambo athlete Alice Schlesinger from Israel, weight category of 64 kg, had her record in Romania as well. She was awarded the gold medal in the World Championship and became the winner of the Universiade, and she added the European title to this list in Bucharest. This is a remarkable athlete, who in addition to the amazing character and physical data that lead her to victory, has phenomenal, brilliant, spectacular and mesmerizing techniques. It was not a surprise that in addition to the gold medal she also won a special prize for the best techniques. It is interesting enough that this is her second special prize in Sambo – the debut took place on the 2013 World Sambo Forum in St. Petersburg.

The favourites, for example, the Georgian team has enough medals in their “piggy bank” of the 2014 European Tournament. But some of the leaders of this team are not smiling on the podium. But why? The answer lies in the high levels of ambitions and aspirations of the athletes. For instance, David Loriashvili, European sports Sambo champion in the weight of 100 kg, gave a calm and pragmatic answer to a reporter's question about why there was no smile on his face: “I will smile only when I win the World Championship.” Well, perhaps it will not take us a long time to wait until almost 80 Loriashvili’s facial muscles – so many muscles are involved when people are smiling – will work in front of the Sambo fans. In six months the World Sambo Championship will provide such an opportunity to athletes from over 70 countries in the Japanese city of Narita.

Among those who successfully completed their march for medals of precious metals in Bucharest, but were not mentioned in this report, are athletes from Russia, Bulgaria, Armenia, Azerbaijan, Georgia, Serbia, Belarus, Slovenia, Ukraine and Lithuania. Completed to continue training hard and try conquering a new Olympus, the World one, very soon.