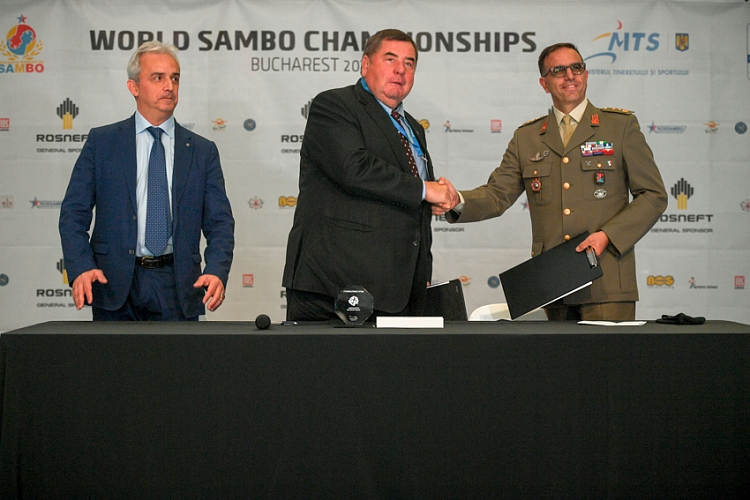 The International Sambo Federation (FIAS) represented by its President Vasily Shestakov and Secretary General Roberto Ferraris has signed a cooperation agreement - a memorandum of understanding with the International Council of Military Sports (CISM). On behalf of CISM, the document was signed by the president of the sports commission of CISM, Lieutenant Colonel Walter Borghino. The signing ceremony took place in Bucharest during the World SAMBO Championships.

– This is a very important day for us, in the future our sport can be represented in the world championships among military personnel. To do this, we have to hold a series of test tournaments, show our sport, Vasily Shestakov said.

– SAMBO is an applied sport, it is necessary for servicemen like air: its techniques allow winning not only in the UFC, they help to neutralize an opponent, to deliver preventive strikes. It is no coincidence that one of the first decrees of the Marshal of Victory, Georgiy Zhukov, was a decree introducing daily 45-minute SAMBO classes in the troops, Shestakov emphasized.

CISM is one of the largest sports organizations in the world, it was founded in 1948. The Council holds major international sporting events, including the World War Games and World Championships among military personnel in 25 sports.