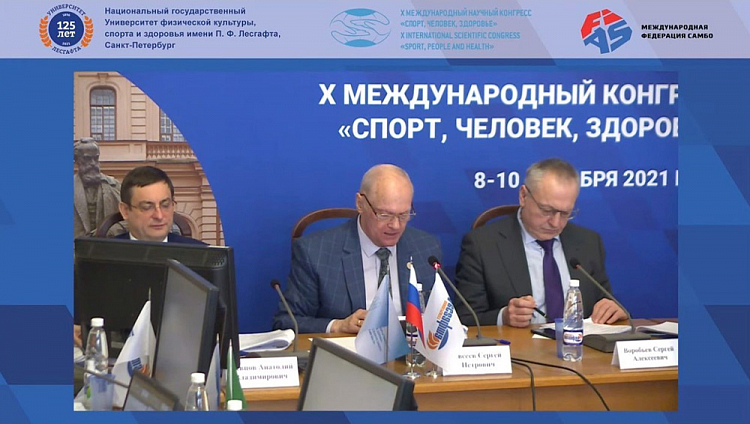 Today, December 10, the 10th International Congress "Sport, People, Health" has finished its work. Despite the fact that it was held in a distance format, the content of the event and the program of the ceremonial part turned out to be very rich. The event was timed to coincide with the 125th anniversary of the founding of the Russian National State University of Physical Culture, Sports and Health named after P.F. Lesgaft.

The opening ceremony of the Congress took place on December 8. Vasily Shestakov, President of the International Sambo Federation, Chairman of the Executive Committee of the International Public Organization for the Promotion of Science and Sports "Sport, People, Health", addressed the participants with a welcoming speech.

“The main scientific direction of the congress is the prospects for strengthening and developing the Olympic movement. This topic is the best fit with the organization that I have the honor to represent. This year, the International Sambo Federation has received full recognition from the International Olympic Committee, Shestakov said. “We strive in our activities to strengthen partnerships with various organizations, implementing in practice the new Olympic motto “Faster! Higher! Stronger! Together!". An example of such cooperation is the creation of national branches of the organization "Sport, People, Health" in various countries. I am confident that the results of the work of the congress will serve as a serious contribution to the Olympic movement."

Further, the floor for the opening ceremony of the forum was given to the President of the National State University of Physical Culture, Sports and Health named after P.F. Lesgaft (St. Petersburg) Vladimir Taymazov, as well as the rector of the university Sergey Petrov. During the ceremony, welcoming speeches were also made by representatives of the authorities, prominent scientists and public figures.

After the opening, the Congress continued with a plenary session with reports on topics related to the main direction of the Congress. In total, representatives of 25 countries took part in the work of the forum, 11 plenary reports and 135 section presentations in 8 directions took place.

On the second day of the congress, the reports of the scientific sections of the X International Congress "Sport, People, Health" were heard. There were eight of them this year.

Scientific section №1. "Prospects for the strengthening and development of the International Olympic Movement, Paralympic, Deaflympic sports and the global movement "Sport for All" in the international sports movement."

Scientific section №6. "Innovative projects and best practices aimed at the harmonious development of personality in the systems of physical culture and sports, health care and education."

Scientific section №7. "Prospects for the development of training and advanced training of personnel for the field of physical culture and sports in modern conditions."

The congress ended on December 10 with a final plenary session, during which the final report of the moderators of the scientific sections was heard, and a Resolution was adopted. Following the results of the congress, it is planned to publish an electronic collection of materials, which will include articles by the forum participants.

The plenary and breakout sessions were broadcast on the FIAS website.