"We are all Brothers" 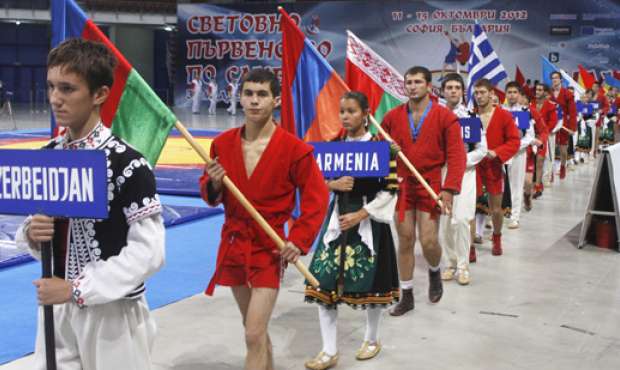 Amazing Italian women do the golden double, the Bulgarians, hosts of the tournament, demonstrate ethnic culture, and the whole world discovers Olympic perspectives of SAMBO. Full of events the first day of the World Championship among Youth that takes place in Sofia is covered by the FIAS website.

Roberto Ferraris, President of the Italian SAMBO Federation, simply radiates happiness. The finals of the first competition day of the World Championship among Youth have just ended. Julia Aragozzini and Anna Rigetti, the juniors (women) representing Italy, have almost simultaneously become Sofia-2012 gold medallists in the final combats. “It is the first time we have achieved such great success”, - says Mr. Ferraris in response to his colleagues’ congratulations while being slightly perplexed and overwhelmed by emotions.

The golden double allowed the Italian team to climb to the third team place following the results of the first day of the Championship. The teams of Kazakhstan and Russia that have got the second and first lines correspondingly happened to score higher. It should be mentioned that anthems of 7 countries were heard at the “ Armeec Arena” in Sofia whose representatives got on the top step of the podium in the first competition day. But these were the final waypoints following preliminary bouts and a bright opening ceremony.

It is extremely exciting to compete at a big arena. And it is twice exciting if your bout is a starting one in a tournament. But if these are also your first large-scale competitions abroad, then you go weak at the knees even more. Young SAMBO fighters who were the first to step on the mat of the Sofia Arena have probably experienced a whole range of related emotions. However, sportsmen are both strong in body and in spirit. Therefore each of the participants pulled themselves together and strived to go through their paces. Those who succeeded in it more than others got ready to become champions in the evening.

Roll of the drums and a melody of the wind-instruments of an orchestra commence a solemn opening ceremony of the World Championship among Youth with a march. It gets especially nice and festive at the sports complex. The viewers follow the colourful performance and introduction of teams and judges with bated breath.

Speeches of the distinguished guests follow the official ceremony. Vasily Shestakov, the President of the International SAMBO Federation (FIAS) takes the floor.

– A big sports event has launched today in the capital of Bulgaria, – he says. – SAMBO becomes more and more popular all over the world. Next year we will be celebrating the 40th anniversary of the first World Championship in SAMBO and the 75th anniversary of SAMBO itself. I would like to thank Bulgaria on behalf of FIAS for the perfectly organised World Championship.

The president of FIAS also announced a piece of news that triggered a burst of applause at the stands:

– We have been working on a Candidature File and forwarded it to the IOC together with a motivation letter. A meeting will take place in December and hopefully SAMBO will become a temporary member of the IOC. 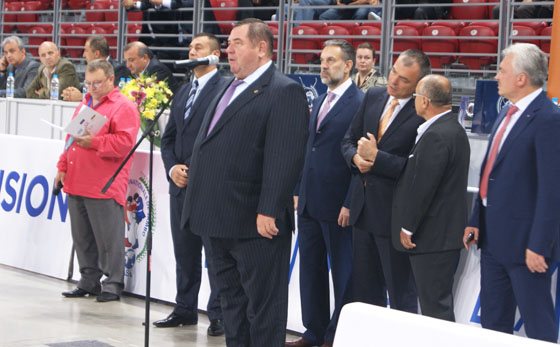 Svilen Neikov, the Bulgarian Sports Minister, thanked FIAS for the lent support to the Bulgarian SAMBO. He particularly pointed out that at the present time SAMBO is a part of the Sports Education Programme in Bulgaria. Mr. Neikov as a host of the held tournament officially declared World Championship among Youth and Juniors open. 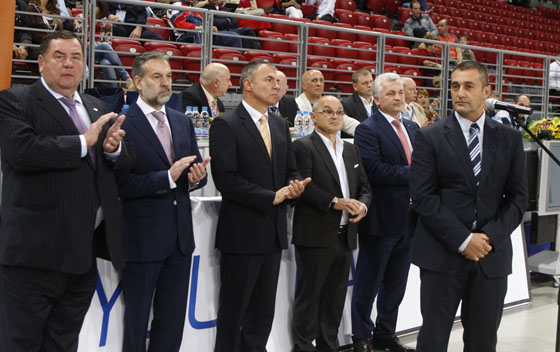 The viewers got a chance to become familiar with the Bulgarian ethnical culture afterwards. Performances of folk dancing groups accompanied by traditional colourful music did not leave anyone untouched. Our website managed to find out at the ceremony rehearsal that young Bulgarian artists were very nervous as they were about to represent the culture of their country. The artists gave extremely serious attention to the entrusted mission and it should be mentioned that they successfully dealt with the challenge.

The time of the first day finals has come. The coaches stretch their shoulders and give last pieces of advice to their students who then go to the mats. The couches follow them with their eyes and it is hard to tell whether it is a look of a teacher or of a parent. And young SAMBO fighters suddenly change and start resembling experienced combatants who got hardened in bouts. Now each of them stays face to face with an opponent and victory depends only on themselves. 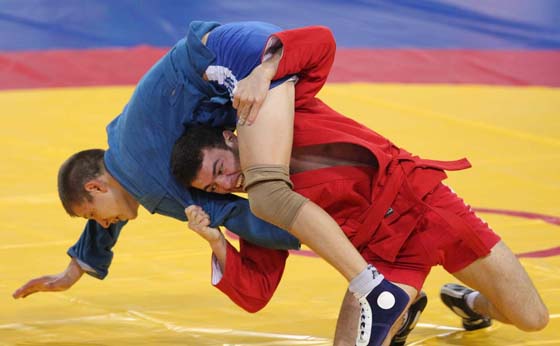 The viewers enthusiastically cheer and try to prompt something. Some sportsmen listen to the prompts, others do not pay to them any attention but it does not influence on passion of the viewers. Hot-tempered sports fans hardly control their emotions to stay at stands and not to get closer to the mat. 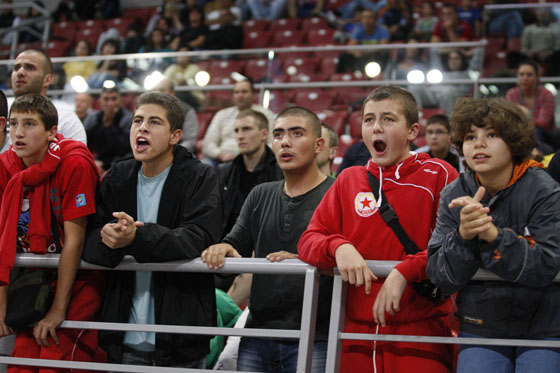 And here comes the end of a bout and the judge declares results. The viewers have absolutely opposite emotions: some of them sigh disappointedly while others raise a happy cry. Besides, the participants of the finals have even sharper impressions. Nevertheless the loser always finds strength to shake hands with the winner. 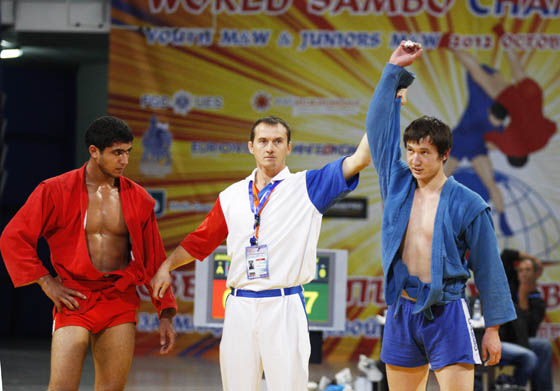 Those who have never stood on the top step of the victory rostrum probably will not understand these emotions. All the attention is locked on you as you have just proved that at present you are the best of the best and the national anthem is heard in your honour and the flag is hoisted. These factors make some people cry while making others smile but each of them stands at the peak of happiness. 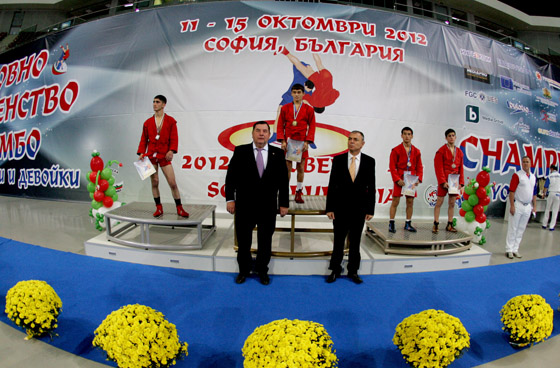 – You experience the most positive emotions as it is very pleasant to gain victory at such a big tournament, to listen to your national anthem while standing at the first step of the victory rostrum, – said Aleksey Shevchuk, a Russian champion among youth (men) in the weight category up to 75 kg in the interview for our website. – As for the tournament, it was hard both to combat itself with different opponents and in the first instance to morally tune in. It was actually my first time participating at such a large-scale championship therefore a certain nervousness was in the air.

– Which bout was the hardest?

– In spite of the fact that I gained victory in the finals ahead of time, exactly this bout turned out to be the hardest for me. I’d like to say that it is, firstly, very honorary and, secondly, extremely nervous to represent your country at such a big arena in the limelight of television cameras. I’ve managed to deal with all the responsibility thanks to support of the coach and to thoughts about my family and the loved ones. 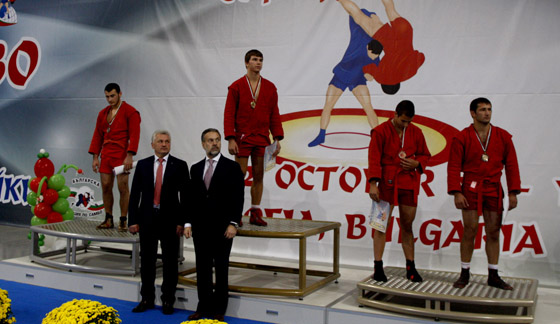 There were principal bouts at the Championship. Orhan Garaev from Azerbaijan managed to snatch a victory from Ovanes Aleksanyan, a representative from Armenia, in a stiff and keen bout. As a result Orhan won the Championship among Youth (men) in the weight category up to 60 kg. After the medal ceremony the gold medallist of Sofia-2012 shared his thoughts in the interview for our website.

– I am happy to gain victory over the SAMBO fighter from Armenia in the finals. However, he and I have principal competition as I lost to him in the European Championship and now I have managed to gain revenge, – said the SAMBO fighter from Azerbaijan. – At present this victory has become my major success in SAMBO. I was going to Bulgaria with intentions to get through to the finals and when it happened I had only one thought in my mind: I must stand out and I must win.

– You were actively supported by your team-mates…

– All of us root for and support each other in the team. We are all Brothers. Another representative of our team competes today in the finals and for the grace of God he will be strong enough and gains the victory.

Despite all the attempts and efforts as well as energetic support of team-mates Farid Mikailov, a junior from Azerbaijan, yield the championship to Ayub Mehtiev, a representative from Russia. Of course, he got upset but still you do not win the World Championship silver medal every day. Thus he has a lot to be proud of. Generally, the results of the first competition day of the tournament in Sofia look as follows: 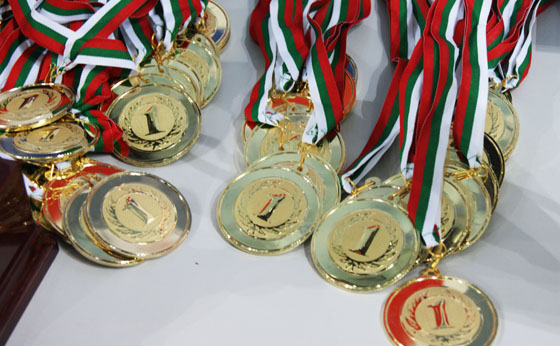