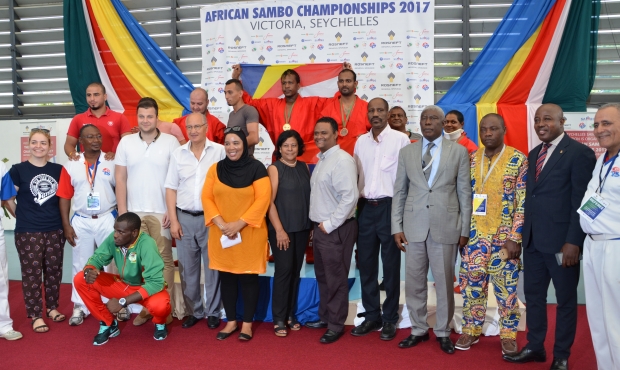 The national team of Morocco became the winner of the team event of African Sambo Championships, which were held on May 12-13 in the capital of the Seychelles Victoria city, Cameroon took the second place, while Tunisia finished third. The general sponsor of the tournament is Rosneft Oil Company.

The second day of the competitions was quite spectacular, it was marked by unexpected results: several wrestlers won against all odds and the representative of the Seychelles won a gold medal in heavyweight category for the first time in sambo history.

The victory of Seychellois sportsman Dominique Dugasse in sport sambo heavyweight category (over 100 kgs) became the most symbolic one. It was the final fight at the African Championships and became fateful for the hosts of the tournament, delighting the audience in the local Palace of Sports. Against all odds, Dominique achieved a smashing victory over his rival from Tunisia Zanouni Makrem, who was considered a favourite by some experts.

Following the results of the competitions, Cameroonian sportsmen won the largest number of medals – 13, including 7 gold, 2 silver and 4 bronze medals. Despite this tangible advantage, Morocco became the winner of the tournament, having won 12 medals (7 gold and 5 silver). Tunisian sambo wrestlers got the third place – one gold, three silver and one bronze medal, the Seychelles came forth, having overcome Tunisia in the amount of medals, but also having earned fewer silver medals.

Overall, both preliminary and final fights of the second day were spectacular. The struggle between two principal rivals – Morocco and Cameroon was obvious throughout the whole tournament, both on the mat and in the stands. Fans and cheerleaders competed with each other in emotional expression – from cheers and chants to dances, celebrating every victory of their compatriots. Despite minor injuries and lacerations, all fights were held in a friendly, even though from the point of “fierce” sport atmosphere.

There was an exciting fight between Nasser Edderdak (Morocco) and Michael Chamu (Cameroon) in combat sambo in under 90 kgs weight category. Cameroonian sportsman had superiority over his rival in striking techniques, since Moroccan sportsman came into combat sambo from sport sambo. Throughout the fight Michael made play with both hands. Nevertheless, due to mat wrestling skills Moroccan sportsman managed to achieve a hard-earned victory, having made himself a birthday present.

Another thrilling fight was in combat sambo in under 80 kgs weight category between Moroccan and Cameroonian sportsmen. Elussin Zuad (Morocco) and Rene Mbong (Cameroon) both fought nobly, no one wished to yield. Cameroonian sportsman outstood his rival in height and managed to deliver two big head punches, what in turn could knock him down, but Moroccan representative held out, having shown some muscle. Eventually Elussin managed to seize the initiative and pulled out the victory due to a series of successful throws.

Local folk music band, which performed the anthem of the Republic of Seychelles together with the spectators, took part in the closing ceremony. The spectators did not want to leave, chanting the name of the new national hero, who gave interview to the press with great pleasure.