The first day of African Sambo Championships is over in Seychelles 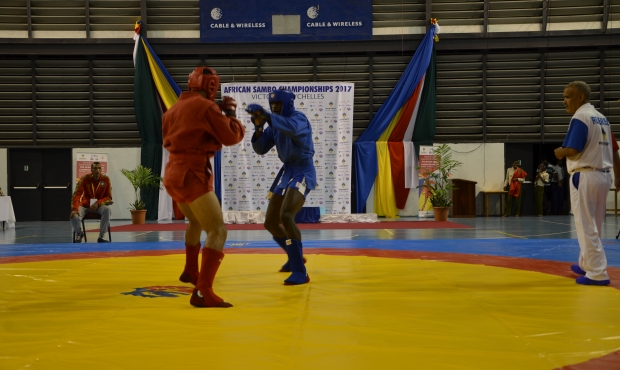 The first day of African Sambo Championships, having handed the victory to Cameroonian sportsmen in major dispute with Morocco in informal team event, is over in the small town of Victoria in the Seychelles. The “lions” won three gold medals; they also won another gold medal in combat sambo. The Moroccans achieved three victories in return. The general sponsor of the tournament is Rosneft Oil Company.

Men in the lightest under 57 kgs weight category opened the evening program of title fights. Morrocan sportsman Mohammed Zelmumi and the representative of Niger Abdul-Rashid Seini met in the finals. The fight was spectacular, but not quite even. As a result, Moroccan sportsmen Zelmumi won with a weighty advantage, the final score was 7:3.

After men, women came out to the mat, also starting from the lightest weight category (under 64 kgs). Unfortunately, there was no struggle in the finals. During her debut, the representative of Cameroon Paul Sitcheping choked out local sambo wrestler Marie Sheryl Ellya and clinched a gold medal.

Spectators saw another Moroccan representative Abderrahim El Kars in men’s under 68 kgs weight category. His rival was Tarek Sadfi from Tunisia. In this fight the Moroccan sportsmen achieved another victory by a score of 8:3.

Women in under 72 kgs weight category competed for the next set of medals. The fight turned out to be very rapid: during her debut Cameroonian sportswoman Edwig Feugang Quete seized the moment to throw Egyptian sportswoman Zakhariya Marim Yakha on the mat. As the result, the latter failed to get out of submission hold.

Men in under 82 kgs weight category closed Saturday’s sambo program. There was a surprise for Seychellois spectators: Moroccan Maroin Ulhaj lost on points to Louis Messi (Lionel Messi`s namesake), who was considered an underdog, having enthused numerous Cameroonian fans.

In the lightest weight category (under 68 kgs) the representative of Tunisia Saifallah Msallmi defeated Moroccan sportsman Illias Amimi on points. There was a dramatic fight in under 82 kgs weight category. Being ahead throughout the fight, Moroccan sportsman Badreddin Diani failed to avoid the attack of Cameroonian sportsman Epune Batamaga in the dying seconds. The latter could not believe in his success for quite some time after the fight.

There will be 7 more medal events of African Sambo Championships on Saturday.