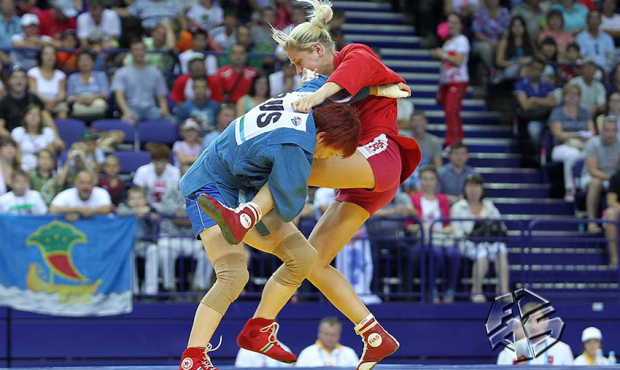 The shortest final of the Universiade, the Israeli "multifunctional" athlete, the Argentine "bronze" with a golden tint and the Belarusian team spirit - the second day of SAMBO competitions at the Universiade remained in memory by different events. Who of the athletes is actively writing its thesis? Why the Israeli judoka turned to perform SAMBO? What is the secret of success of the Argentine SAMBO? And why the "Universiade - it's not the World Cup"? Answers to these and other questions you will find in the report of FIAS website from the second day of the SAMBO tournament at the Universiade in Kazan.

If someone was late for a few seconds yesterday to follow the online broadcast of the final fights on the website of the FIAS, that means this person did not see the victory of Anna Kharitonova in SAMBO competitions at the Universiade. It took the Russian just 15 seconds to prove her superiority over the Ukrainian Inna Cherniak.

- At the competition of such level you realize that you cannot give a single chance to the opponent. If you suddenly start to play cat-and-mouse and if you are not completely concentrated, your rival will certainly use the chance that you will inevitably provide to him. That's why I always try to impose my struggle and rejoice when I manage to finish the fights in less than a minute - as it happened today - said the champion. 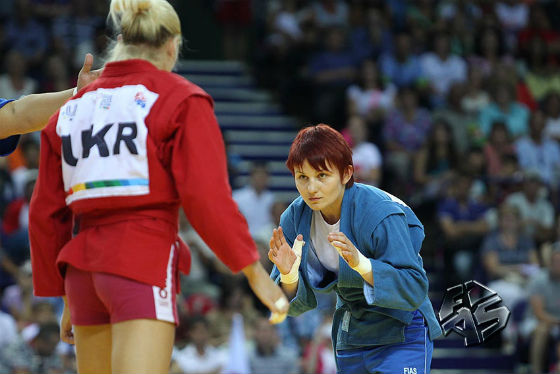 Apart from the fact that Anna is a great athlete, she is also an exemplary student. The perfect combination for the sambists at the Universiade.

- In the spare time I am writing a thesis - I want to become a sports psychologist. Some say that this profession is not necessary and important, but I know myself that it is often psychology that decides the end of fights at the highest level - shares her opinion Kharitonova. – My husband actively supported me on the stands. After the competitions we will go with him on a fishing vacation - we love to cast the line, and spinning is even better. So far my biggest caught fish was of about a half a kilogram, but I am trying to progress in this direction.

Meanwhile,on the stands the supporters with Israel flag are distinguished by their activity. We are going to find out whether they came to Russia to support their team at SAMBO competitions. It turned out that Anya and Vanya, who are still studying at school, live in Kazan, and are the members of the local Jewish community.

- We met with the guys, when the Israeli team arrived at the Universiade. Athletes came to our Shabbat festival, where the special reception was organized in their honour - says Anya. - Previously, we knew nothing about SAMBO, but today we came to the competitions and literally got "sick" about this sport. It is so interesting here! And we also want very much our athletes to win in the finals.

The Israeli sambist Alice Hester Schlesinger did not disappoint the expectations of her fans, having technically won against the Belarusian Tatsiana Tokts. Well-known in judo world the Israeli athlete became the owner of "gold" that she added to another her medal of the highest order at the Universiade in Kazan. The point is that a week ago Alice Hester became the champion in the women belt wrestling. 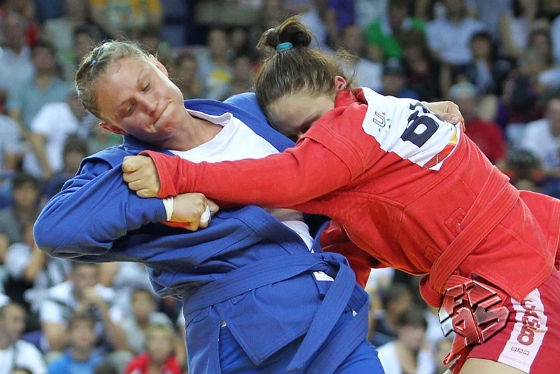 - Due to certain problems in our national judo team, I decided to switch over to the performance in other kinds of sport. Together with my personal coach we decided that SAMBO is exactly that sport where I can achieve success. So as a result it happened like this - smiles Alice Hester. - But the fights were really hard, and the opponents were different and very interesting. I must say that it was a difficult day. I was at the Olympics in London, so I can compare it. Upon my feelings the Universiade in Kazan is like a continuation of the Olympics. The atmosphere, the organization, the audience - all this reminds me of the participation in the main Games of four years.

In contrast to the Israeli athlete, the Argentine sambist Alejandro Clara is not spoilt by the titles and awards of the major events. Kazan 2013 became a happy place for him and for the whole Argentine SAMBO. It is here where Alejandro won the "bronze" – this achievement is akin to victory for Argentina. Before the award ceremony for the weight category up to 74 kg the excited and happy President of Argentina SAMBO Federation Juan Pablo Melo appears in the mixed zone. He is expecting his pupil Alejandro Clara to climb the podium of such a major tournament for the first time. 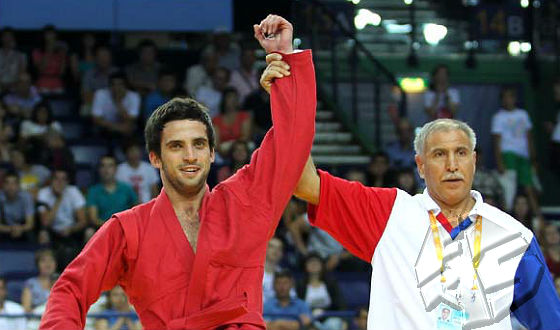 - SAMBO is now actively developing in America, and, of course, in Argentina. The president of our federation Juan Pablo works very hard so that we could achieve success at major competitions. And my medal of today confirms that this work is built correctly. For the first time in the history of Argentina, we were able to achieve such great success, and I am really happy – smiles Alejandro, and then falls into the tight male embrace of his mentor.

Uali Kurzhev, the owner of a solid collection of the highest order awards of various SAMBO tournaments is also shining with happiness. Practically no one doubted that the Russian would win the "gold" in Kazan, and he did not disappoint his fans. 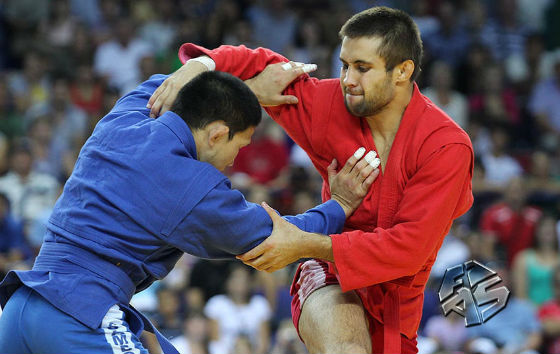 - I try to prepare in a special way for every important competition. It is important to be in the right mood, to evaluate the strength of the opponents and to bring yourself for the tournament in good shape. I tried to make up my mind for the Universiade, like for the World Cup, but here the feelings are still different. As they say, "Universiade - it's not the World Cup". We even discussed this with the guys in the team and agreed that the atmosphere in Kazan is completely different, we feel like at the Olympics - says Uali. - How my brother congratulated me? He has not yet - in the morning I switched off the phone not to be distracted, and did not switch it on yet. I think we will now talk with him and discuss everything that happened - he watched the tournament on TV or on the website.

Nikolay Matsko of Belarus did not win awards at the major SAMBO tournaments for a long time. Among his awards there is a victory at the Youth World Cup in 2008 and the medals of SAMBO World Cup stages. Thus, his path to the "gold" of the Universiade was somewhat thorny. However, this was in Kazan, where he was lucky again - and the athlete won the "gold", having conquered the uncomplying Israeli Peter Paltchik in the final. 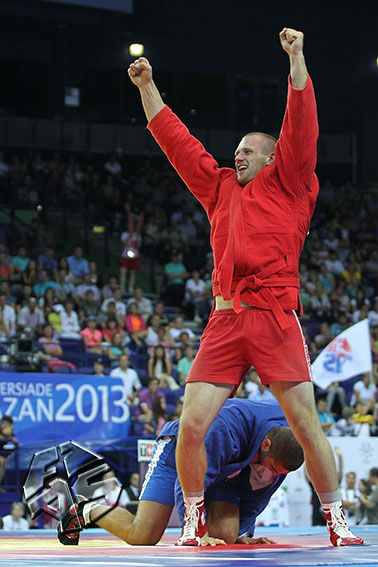 - I am very glad that SAMBO was included into the Universiade program, it shows its importance. I think it is the sport that deserves to be Olympic. Today I managed to win the first "gold" for the Belarusian SAMBO team in Kazan. I think tomorrow the guys will support my golden initiative – there will be 5 people to fight. We did not start very well, but the coaches have made some corrections, and now our results are better - says Nikolay. - Even while we could not do it, no one in the team panicked, we have an incredible atmosphere, because we are one family. I think it is the coaches achievement - when you get to the national team, they teach you not only to fight, but firstly to treat each other with love and respect. So I want to thank very much our coaches and teammates. On the third day of the competitions we will support our guys all together again.

Thousands of spectators on the stands and in front of screens of their computers will be closely watching the competitions and supporting their athletes. Live broadcast of the Universiade SAMBO tournament will start on the FIAS website, as in previous days, at 10 am Kazan time (and Moscow as well). Finals will start at 16:00. Enjoy! 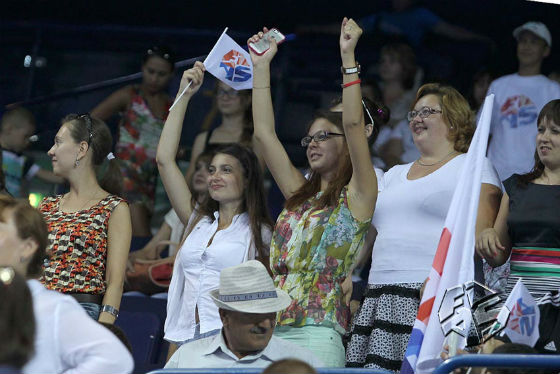