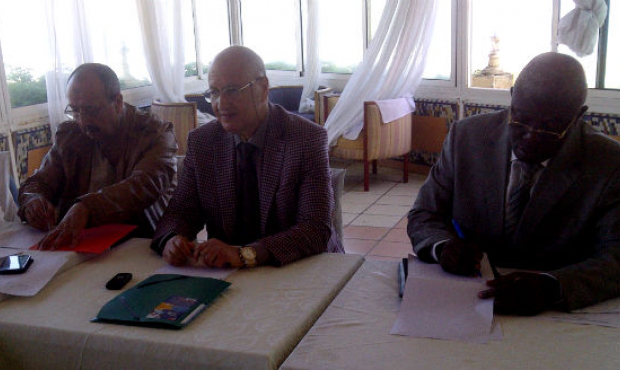 So, this morning at the hotel «Le Littoral», where all the delegations authorized agents arrived in Morocco were accommodated, the meeting of the African SAMBO Confederation Bureau was held. The hotel’s name «Le Littoral» translated from Arabic means “coastal”. The hotel is located directly on the Atlantic Ocean coast, so the Bureau meeting started to the sound of it and was attended by SAMBO Heads of 7 African Continent countries.

Many words have been said about the support of the African SAMBO provided by FIAS – this is both workshops conducted by the International SAMBO Federation specialists on the continent, and assistance in the form of sports outfit and equipment for SAMBO gyms, as well as extensive financial support of the Federations. And the results of the FIAS work in cooperation with the African SAMBO Confederation don’t keep us waiting long. One of the work results can be considered as a possible enlargement of the African SAMBO Confederation ranks. As we have already reported, at the upcoming organization Congress three new members: the Ghanaian, Seychelles and Cape Verde SAMBO Federations may be taken in its ranks.

An offer of the SAMBO Federation President Niger Hamidu Alzum was accepted with interest. Its essence lies in the fact that on the eve of the 2013 World Championship in St. Petersburg (Russia) all SAMBO teams of the African continent would gather for precompetitive training camps in Casablanca in the middle of November and as a united, friendly team all go together to the main SAMBO start of the season in Russia.

After the Bureau meeting lunch time has come. Traditionally Friday from the Moroccans’ gastronomic point of view – is the day of the local cuisine, which is called “couscous”. It is cooked from cereal, similar to semolina, meat (mutton, lamb, chicken), vegetables (onions, tomatoes, potatoes, squash, pumpkin, carrots, turnips, greens), olive oil and spices. Usually couscous is cooked by all the women of the Moroccan family (officially men – the citizens of Morocco can have up to four wives) on Friday, and it is usually served at weddings and other national Moroccan holidays.

But tomorrow, perhaps, all those involved in the African SAMBO Championship in one capacity or another, won’t have to have dinner. Judge for yourselves, the program of the tomorrow’s competitive day is rather dense. The competitions start in the sports complex named after Mohammed V at 10 a.m., until 14:00 – the preliminaries time. The evening part of the tournament begins at 16:00 with the fights for the bronze medals, 18:00 – the official Opening Ceremony of the African SAMBO Championship time, and the main fights of the day that will determine champions and silver awards winners of the Continental Championship begins at 19:00. We remind you that Moroccan time is 3 hours slower than Moscow.

The African SAMBO Confederation Congress, scheduled for tomorrow, will be held on May 5 in connection with changes in the schedule of Heads arrivals of some of Federations. Workshops for coaches and athletes are also scheduled on Sunday, which will be held for all the wishing by the FIAS Executive Director Sergey Tabakov.

Well, tomorrow will name champions and winners of the 2013 African Championship, and we for our part will tell you quickly about everything that happens on SAMBO mats of the Sports Complex named after Mohammed V on the FIAS official website already tomorrow.