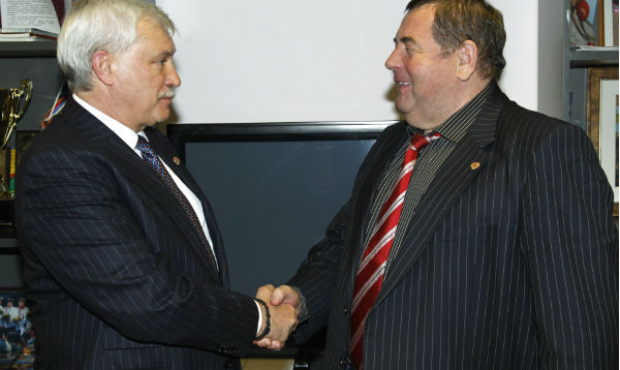 Next autumn Saint-Petersburg (Russia) will become a site of pilgrimage for Sambo wrestlers from all over the world. SportAccord World Combat Games and SAMBO World Championship will take place here at the interval of just a month. It is no surprise that such an active development of this type of combat inspired local authorities for creation of the SAMBO Palace.

The necessity of constructing such an object was discussed at the meeting of Saint-Petersburg Branch Supervisory Board of the All-Russian SAMBO Federation. Georgy Poltavchenko, Governor of Saint-Petersburg, Vasily Shestakov, President of the International SAMBO Federation, Andrey Kliamko, First Vice-President of FIAS, Sergey Eliseev, President of the All-Russian and European SAMBO Federations, as well as sportsmen and functionaries participated took part in it. Georgy Poltavchenko, Chairman of the Supervisory Board, entrusted the Committee for Physical Education to develop a design of a new combat sports complex.

– SAMBO is a type of sport, it is a type of combat which has every right to be called an Olympic one. Next year we plan to hold the World Combat Games and SAMBO can prove itself there too, - emphasized the Head of Saint-Petersburg.

It is necessary to give attention to the mass scale of the combat when developing it internationally. The Governor suggested initiating an elective course of SAMBO at schools. Moreover, it will be possible to organize sports clubs in this type of sport for the youth older than 17 in the premises that belong to the city.

Besides sports halls it needs to have qualified teachers. Georgy Poltavchenko recommended to involve students of sports universities as a coaching staff. The experience of the held SAMBO World Cup among students has shown that the youngsters know how to achieve good results.