Natik Bagirov: “My sons made me to go back to sport” 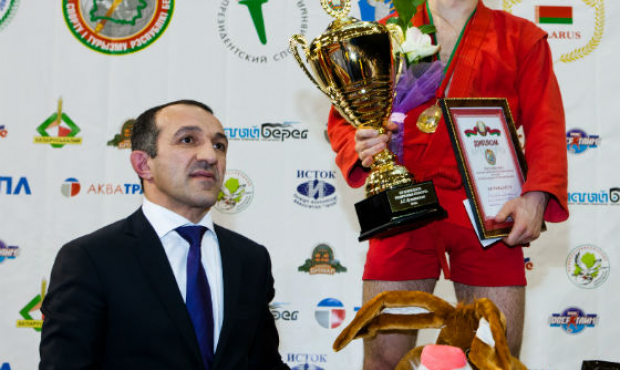 Belarusian and Azerbaijanian athlete and coach Natik Bagirov is spoken of as a distinguished and famous person. Being a multiple world SAMBO champion and the prizewinner of world judo championships, he performed at the Olympics by himself, as well as brought the Olympiad gold medal to Belarus as a coach. Several years ago Natik Nadirovich announced that he had finally finished his sports career and had left for business. But until present there is no major international SAMBO tournament that takes place without his participation. And that was the topic from which the conversation between FIAS correspondent and the famous sportsman started.

– Probably as there are no ex-intelligence officers, there are no ex-SAMBO athletes, – discourses Natik Bagirov. – Though there are examples of people who have quitted elite sport and there is no way they are coming back. Having finished performing, I have started coaching. I was the Head coach of the Belarusian national judo team. And I was quite successful in that: after every championship we came back home with medals and the most important is that we brought the gold medal from the Olympic Games in Athens. This result gave me an opportunity to leave sport calmly. As it is said, the Moor has done his duty, let him go.

I hadn’t been in sport for many years, but my sons made me to go back as they were very active in sports themselves. My older son Anar immerses himself in study now and my younger son Arif is a professional SAMBO and judo athlete. That is why I found time to come to the gym, gave them some advice and helped them. So it turned out that for all those years I had got involved into the process again and had begun to visit almost all competitions. Moreover, the administration of the Belarusian SAMBO Federation and all national team’s coaches are my friends. I couldn’t stay away from them as we live all together as one family.

– You have said that your older son immerses himself in study and has stopped paying a lot of attention to sport. And what about your younger son’s successes? Do they make you feel happy?

– Of course, they do. As far as SAMBO is concerned, he has already won European Individual Youth championship and has already been the prizewinner and the winner of the World Youth Championship. Moreover, not so long ago he won the Open Judo Championship of the Republic of Belarus and the competition there in his weight category was quite tough. Right now Arif is the member of the national judo and SAMBO teams of Belarus. He is our hope and we are counting on him, and time will show how it goes.

– Of course, I spend a lot of time training him but the main work is done by the coaches of the national team. Vladimir Posledovich, his first coach, is always with him. For many years I have been trying to do my best at supervising practices and at assisting. I had been coaching sons since early childhood, from physical training to judo and SAMBO. They signed up for sports club, started to wrestle and started to show quite good results at it.

– As distinct to Russia, our country is small that is why we shouldn’t scatter good sportsmen, that can show good results in SAMBO and in judo, around. Not so long ago the Chairman of the Belarusian SAMBO Federation Vladmir Yaprintsev became the Head of the National Judo Federation. And we can already observe some positive results now. First of all, the team of coaches has been renovated as every person wants to gather like-minded persons around. I think that it is right because they will work together and will bear the responsibility for all successes or failures. Secondly, the attitude of sportsmen and coaches to their work has changed. It refers to practices and to mutual respect between people on the national team. Friendship in the team is at the cornerstone as it is where everything begins. And later on everything is carried over to the process of practicing.

– You live in several countries at the same time. Have you clocked where you spend the majority of time?

– In Belarus, for sure. I often visit my ethnic motherland Azerbaijan and I spend a lot of time in Russia. I also visit foreign countries on business or travelling with the team, but I still spend the majority of time in Belarus.

– You can freely speak 7 languages. And what is the language of your thoughts?

– I think in Russian. I was born and grew up in Baku, the city that has always been and still is one of the most international cities in the world and at the same time Russian-speaking. We spoke Russian everywhere: in the kindergarten, at school and at university. In those days speaking Russian in Baku was something like good manners; just like in tsarist Russia speaking French was customary.

Moreover, I have already lived in Belarus for 25 years. And here the majority of people also speak Russian. I know very well and love the Azerbaijanian language, but I think in Russian as it is also native to me just like to other people from Baku who know it not worse than many native Russians.

– Who is your idol or icon?

– First of all the idol to me is my parents. Unfortunately, my father has already passed away. They have always been and remain the people who are an example to me and I want to be like them. But no matter how hard I try I will never be able to reach the level of my parents. They are like saint people to me. And I am also proud of my friends. They are like a family to me. Every one of them, is like an ideal.

– They say there can’t be too many friends…

– Many people do think so, but I have a lot of friends. And they are those types of friends who are ready to be next to me twenty-four hours a day. I am a very communicative person, I am on good terms with everyone, but I don’t let a person into my life and call him or her a friend very easily.

– We have a lot of photos in our archive from various tournaments. And the most emotional photos are of you. It seems that when you cheer for somebody, you just wrestle with this person on the mat.

– It is definitely so because I worry and spend every second of the wrestle together with the athletes on the mat. I feel with them psychologically and they feel physically. Sometimes I look at myself from aside and it is funny how I react to everything. My hands and legs instinctively show counter reaction to competitor’s every move.

– You are said to write poems.

– It does happen sometimes. I get inspired and start writing. I write about life and mostly about some negative sides of it: about poor people or deeds. Poems mostly come to my mind when I am sad. Then the lines just appear on the paper by themselves. And when I am in a good mood I just don’t feel like writing poems.

– Let’s go back to sport. What achievement of yours are you proud of? And what would you like to change?

– I am proud of all my results, they all are dear to me. But, frankly speaking, looking back at the past days from my life experience it seems to me that I would have changed a lot of things in terms of practicing process, psychology and attitude to competitions. If the knowledge I have now could be shared with the Natik that was 15-20 years ago, the results would have been two times better.

– And can it be shared with the young generations?

– I think I can do it. But I need to work on that more profoundly and on constant basis.

– What about writing a book?

– Maybe I should do it. My children asked me to record some autobiographical memories and later on they would process and gather them. But there is no time for that.

– Do SAMBO athletes happen to have star fever?

– Just like the representatives of other sports SAMBO athletes do happen to have this fever. But everything depends on every particular person. Some people take their win as if the world should be at their fit now. There is a very good saying on this: the more fruit the tree has, the more it is leaning to the ground. In other words, the more results a person shows, the shier he or she is. Sometimes you look at some champion and he behaves as if he is 10-time Olympic champion…

– What about you? Did you notice to have this fever in youth?

– Not in a shy way, I will tell you that I have always been very shy. I have always remained ordinary and normal person and I have never stuck my nose into the air.