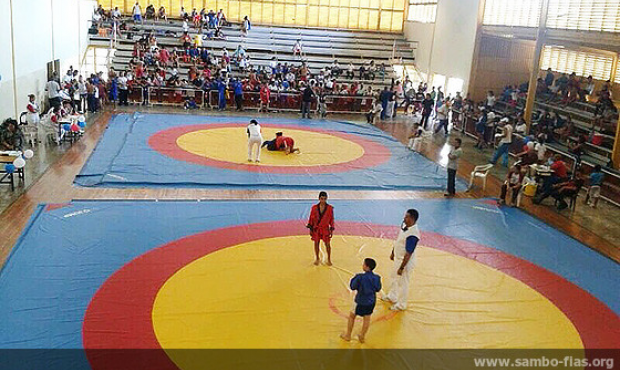 This report covers information on the number of states in Venezuela, which of them is considered the SAMBO state, and how many national championships is held yearly in this famous SAMBO country.

The Annual National Children Sambo Championship took place last weekend in San Felipe, Venezuela. 213 boys and girls at the age of 7 to 16 arrived in the state of Yaracuy, Venezuela, to match their strength against each other in the “wall against a wall” competition, which is the name for team competitions in martial arts.

In several age groups they revealed which state of Venezuela is the most SAMBO one. There are 23 states in Venezuela, 13 out of them faced in combat in San Felipe. Combats between SAMBO athletes from Carabobo club and Aragua club were the most impressive and principal. It appeared that teams from these two states were not only the strongest ones but the most numerous as well. 45 and 32 young SAMBO athletes respectively represented these regions on SAMBO mats.

As the result the current overall ranking according to the states in the children SAMBO of Venezuela is as follows: young athletes from Carabobo are the strongest, they are followed by SAMBO athletes from Aragua, the third place is taken by sportsmen from Guárico, and the last place among five leaders is held by SAMBO stars from Yaracuy and Merida.

By the way, someone from these boys and girls participating in the competitions last weekend in San Felipe will certainly become the participant of the World Championship among Cadets first ever. Let us remind that 15-16 years old SAMBO athletes will fight for the right to be the best in the world in December 2014 in Cyprus.

But this event is yet to come along with the future participation of the Venezuelan team in the World Sports and Combat Sambo Championship in Saint-Petersburg, which will take place in a month. Preparation in Venezuela for the main start of the SAMBO year is on fast-forward, not least because SAMBO athletes from this country succeeded in the Northern capital of Russia some time ago. The bronze medal of the World Martial Arts Games was won for this country by Maria Guedes in the weight category of 48 kg.

The Venezuelan team taking part in the World Championship in Saint-Petersburg was formed according to the results of the National Championship. By the way, the annual calendar of the national championships in Venezuela is very busy. Besides four championships in different age groups there is the Championship among Policemen, as well as the Competitions among students. All in all, SAMBO in this Pan American country is full of events.

Cesar Arteaga, President of the Sambo Federation, comments the situation, “On behalf of the new Federation’s management I would like to express gratitude to the International Sambo Federation for its support. Sambo in Venezuela is really on the ascent nowadays. I am so happy that our sportsmen improve their results each year in the intercontinental and international competitions”.

Sambo athletes worldwide actively prepare to take part in the main start of the year – Sambo World Championship, which will take place in Saint-Petersburg (Russia). Less than in a month they will match their strength against each other to win medals. However this tournament will not be the final large competition of this season. Those who will not succeed in Saint-Petersburg will have an opportunity to revenge at the final stage of the World Cup in Morocco in the middle of December. The winners of the 2013 World Cup will be also defined according to the results of four qualification stages of this year. Please get acquainted with the preliminary qualification of the 2013 Sambo World Cup according to the results of three stages.

Preliminary qualification of the 2013 Sambo World Cup (according to the results of three stages).