“I will not see my medal for several months” 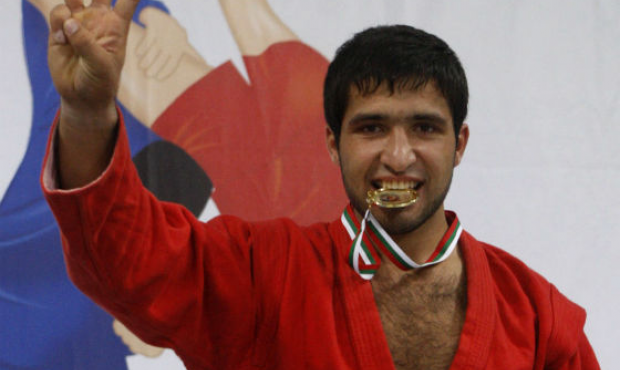 The host of the World Championship among Youth are walking under the slogan No Day without Gold, the French endure failures but illuminate optimism and the Romanians spring a surprise as at the previous Tournaments. Where do the champions store their medals, who comments the Championship online and who became the main winner of the Tournament yet, all these issues are in the reporting of the FIAS website.

When the Bulgarian SAMBO practitioner Tsvetelina Tsvetanova wan a golden medal of the SAMBO World Championship among Youth on the first competition day it draw lots of emotions in the hall. The team, trainer, spectators and relatives started to celebrate the win of their countrywoman in a joint outburst. It seemed that in the first moments the championship in the weight category up to 40 kg got confused a little because of her achievement but then she realised the significance of the win and started to enjoy it actively. That day all the Bulgarian people present in Armeec Arena wanted to make photo with the champion. 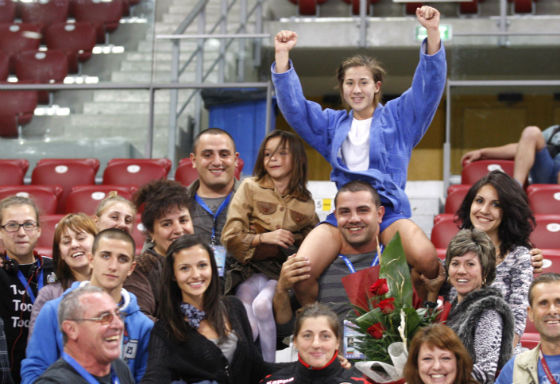 The Bulgarians did not stop to win on the second day of the Championship among Youth. Ivaylo Ivanov became a champion among the youth in the weight category up to 81 kg. But even in this situation tiny Tsvetelina Tsvetanova still remained the main media person who the people wanted to make photo with. By the way the strong champion was allowed to make photo quite extraordinary. And he used this possibility with great pleasure. 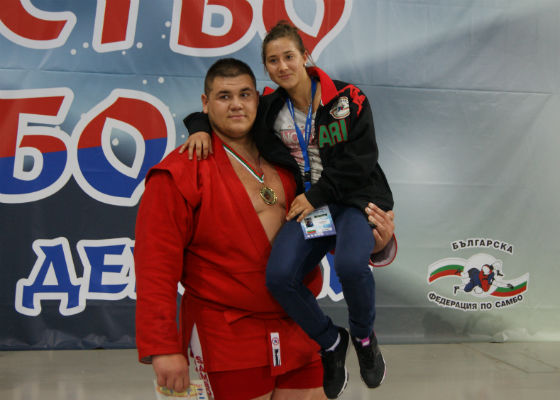 Georgy Yusev, vice-president of the SAMBO Federation of Bulgaria told about the sources of achievements of the Bulgarian SAMBO practitioners at the Championship among Youth. He pointed out that firstly the sport of highest achievements became insignificant, mass sport, children and youth sport in particular became of the highest priority. Secondly the single combats traditionally enjoy especial love.

– It is in our blood, Mr. Yusev pointed out. That is why the Bulgarian sportsmen traditionally perform well in SAMBO, judo, sumo, sporting wrestling. We have a special relationship with SAMBO, about 50 clubs develop this kind of sport in the country. That is why World Championship among Youth that is firstly held in our country became a real holiday for Sofia. It is pleasant that we can arrange these competitions in the new sports complex Armeec Arena holding 12 thousands of spectators.

Inspired by the sport achievements of his countrymen, Georgy Yusev also enjoyed the wins of all rest participants of the Championship among Youth awarding them with medals with pleasure. 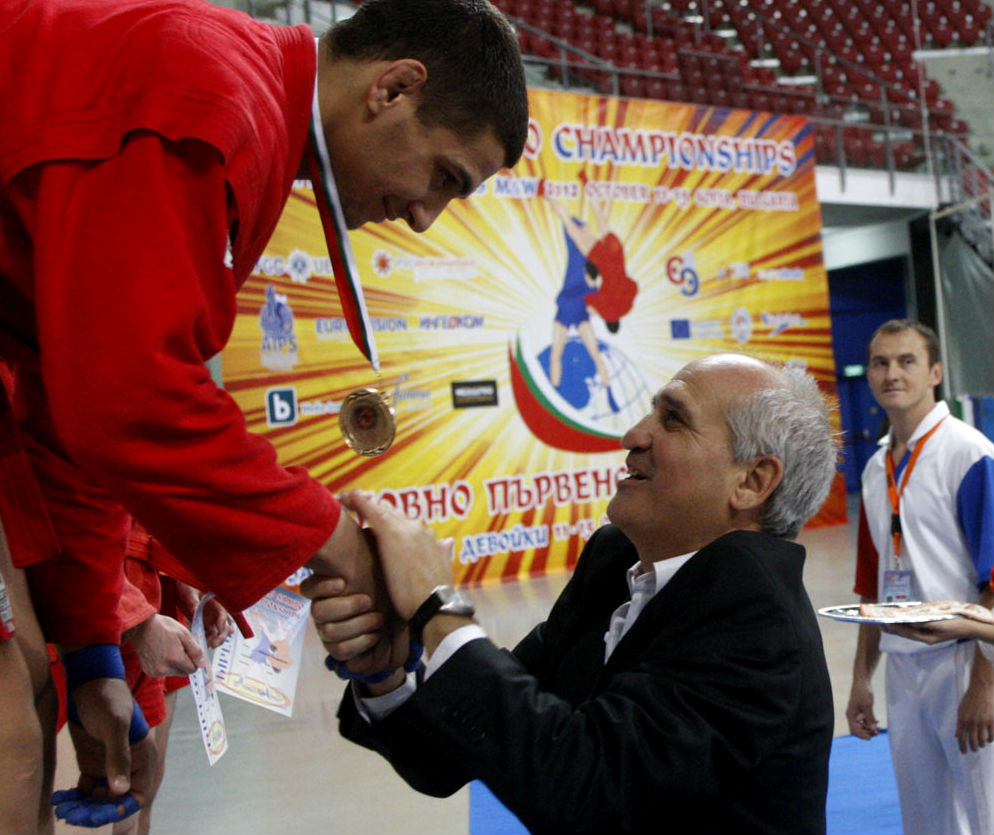 Sport however is not only wins but also failures. And young sportsmen especially strongly react thereto. The sport fans on the stands and spectators of the online broadcastings could watch emotions of all kinds within two competition days. The beautiful half of the mankind could especially hard control itself. 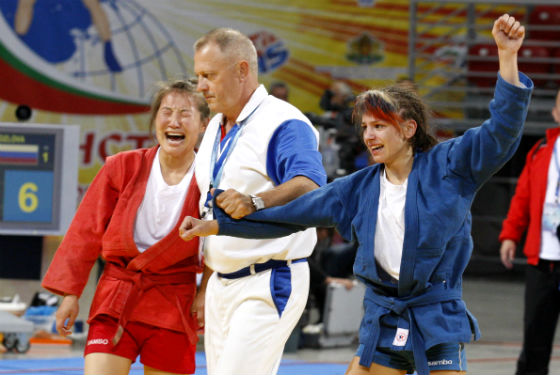 Despite the fact that the French sportsmen did not experience the triumph of the medal wins on the second day either Daniel Mestr the main trainer of their collect team did not sprinkle ashes upon his head. During the conversation with the journalists he was confidently talking about progressive movement and increase of the interest to SAMBO in the country of the Eiffel Tower.

– SAMBO in France is rapidly developing and they willingly come to this kind of sport, the trainer pointed out. We are still at the stage of legal formation and try to set the structure of the SAMBO Federation in the country. Now it is admitted by the French Ministry of Sports. The Federation nowadays is preparing the documents for the sportsmen to obtain accreditation. Since SAMBO is aiming to get to the Olympic family these issues are now of great importance. I suppose that the French Confederation of this single combat will be completely restructured in the nearest future.

– Which aims did you set when leaving for the World Championship among Youth in Sofia?

– We brought 11 athletes here by the way including a young girl, Mr. Mestr told. And it is very important for us to win medals here. It will promote popularization of SAMBO in the country. We watch the evident process though. Single combats are close to the French, it is a life school for us. There is some kind of sincerity, frankness in these kinds; they develop the best features in people. The single combat in our country is a part of educational work. 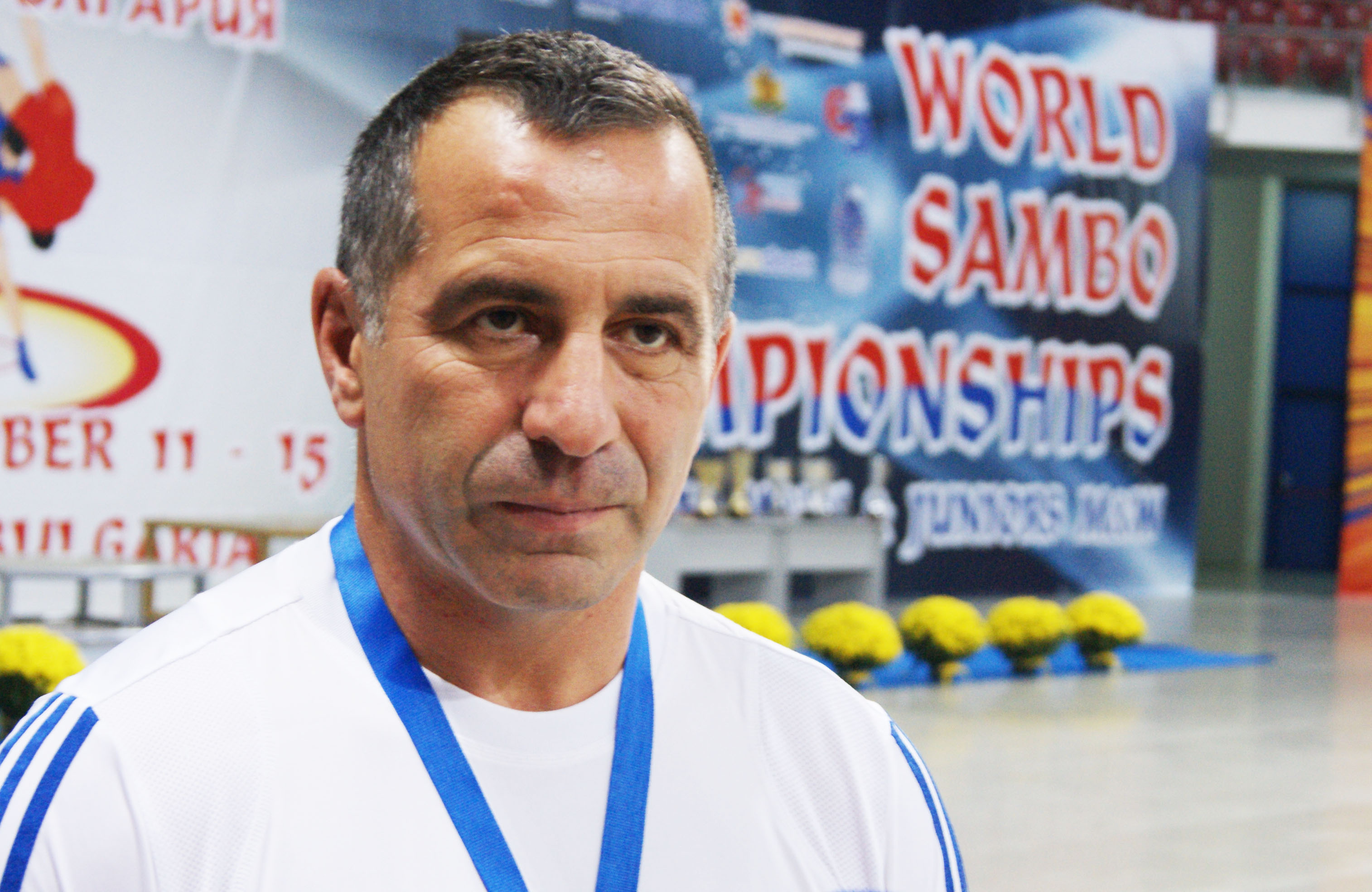 Besides Mr. Mestr said that the National championship was annually hold in Paris where the sportsmen passed the selection to the Europe championship and the World Championship. The trainer admitted that combating SAMBO is the most popular in the country. And it is his clubs that draw the main stream of the sportsmen.

– This is great, no matter which SAMBO draws more attraction, the matter is that the kind of sport for the French became popular, Daniel Mestr pointed out.

The direct online broadcasting of all competitions on the Internet facilitated increase of popularity of SAMBO in France and other countries of the world. The Bulgarian television men from morning till late evening were in the hall of the sport arena missing no events that happened on the carpets and stands. The commentators help the spectators watch the final fights: press-attache of the International SAMBO Federation, Merited Master of Sport in SAMBO Natalia Yukhareva and the journalist of NTV+ television channel, Master of Sports in SAMBO Vladimir Ivanitsky. Being in the immediate proximity from the carpets where the battles were held they told not only about the subtitles of the fights but also noticed minutest particulars connected with the behaviour of the sportsmen, trainers and even judges. 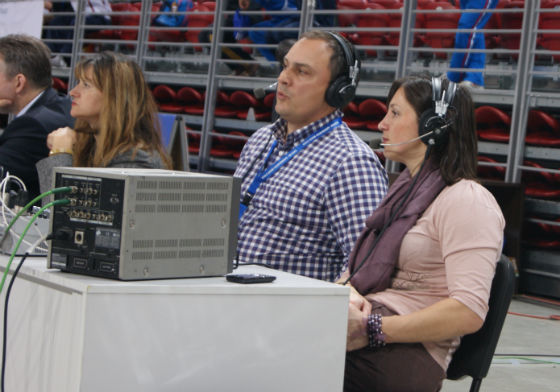 The record of all the broadcasting will be provided on the FIAS website in the nearest time.

The journalist also worked hard at the Tournament. The sportsmen and their trainers were constantly in the sight of video recorders and cameras and were periodically bombarded by the questions. Especially great attention fell to the champions and their trainers in this matter. It seemed to us that each of them tried to answer honestly and nobody refused the interview even in the most inappropriate time for this. We decided to use this situation and interviewed Paruyr Saakian, the fresh-baked World Champion among youth in the weight category of 87 kg giving him no possibility to recover his breath after the final battle. 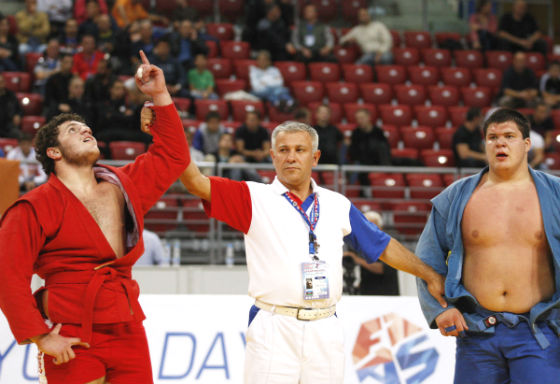 – Congratulations on the win. How could you do that?

– My opponent is of greater mass that is why active movement was the only possibility to win.

– The judges stopped the battle for several times. Did it help or disturb?

– If I were very tired this could play into the hands. But I only started fighting that is why I was full of powers. Though I got hurt, I sat on the knee badly and heard crackle. I thought I would be forced to stop the battle. But then I got up, moved my leg, like no pain, and continued the battle.

– Did you think where you will store the medal?

– Most probably I will not see it properly for the first months. It will be in the trainer, then in the sport school, it will be shown to everybody. And only after that it will turn in me, I will find a place for her on the wall in my room, the winner smiled.

The Romanian SAMBO practitioner will also be able to demonstrate his medal in public. According to the latest results of the representatives of this country his gold can not be called a sensation yet. By the way Daniel was not considered the main favourite. Meanwhile the sportsman looking behind to no celebrities won Ushangi Kokauri, the Georgian SAMBO practitioner in the final. As a result Daniel was enjoying… 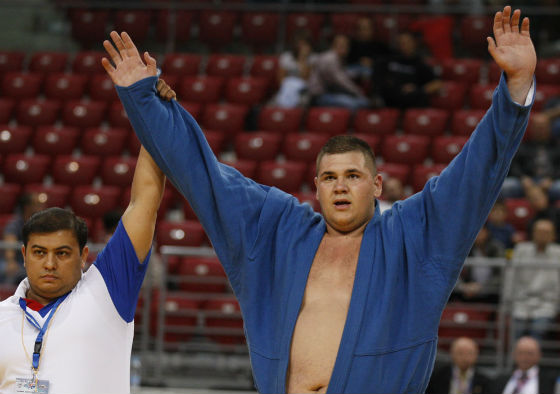 …And Ushangi got sad together with the trainer. 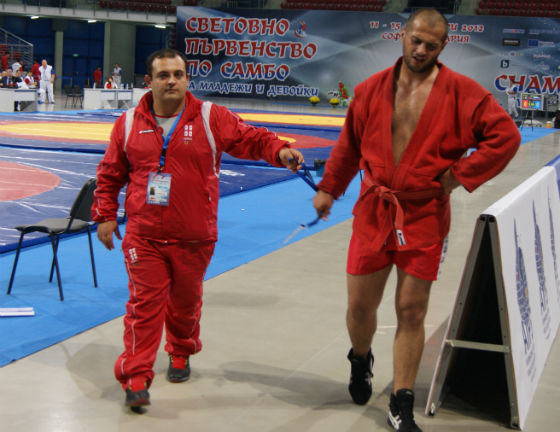 Despite the fact that somebody won and somebody lost, the Tournament has always had a winner. Its name is a spectator. The spectators won the greatest prizes when enjoying SAMBO in the performance of the best young sportsmen. Since each participant of the Tournament turned from time to time into an active follower who is worrying about his team friend then all the SAMBO practitioners at the Work Championship should be considered the winners. 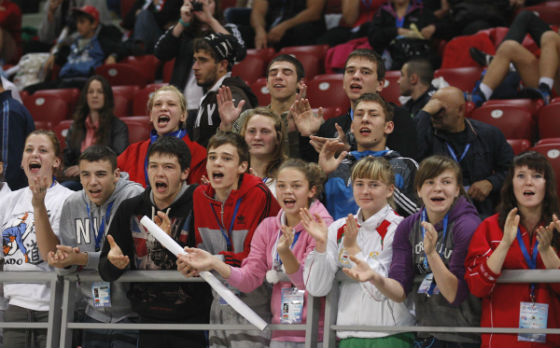 The official results of the second competition day are the following: