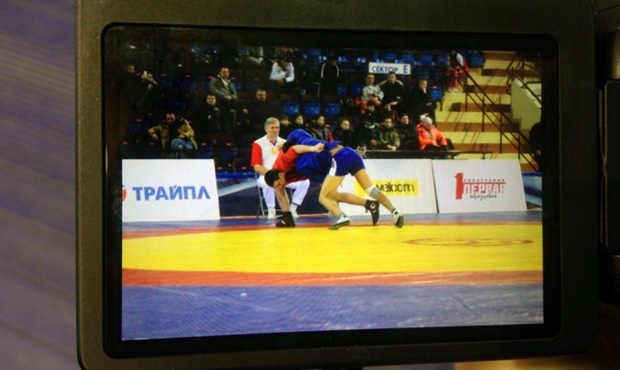 The 19th Sambo World Cup “Belarus Open Sambo Championship for prizes of the President of the Republic of Belarus” has started today in Minsk Sports Palace. This tournament brought together about 18 participating countries in 21 weight categories of men’s and women’s sports and combat sambo. Here you can find the names bronze medalists of the first competitive day and a short story about those who somehow drew attention to themselves in fights for bronze.

Borisova Zinaida from Russia is the lightest participant of the women's tournament; her weight is only 43 kg. Her opponent in small final, Anna Shurmei form Belarus, was not only heavier but also almost a head taller. It took Zinaida less than 2 minutes to get eight-point advantage and win, owing to her dense wrestling, sitting down and stepping behind her rival. It was the first Russian bronze medal in the tournament, and Zinaida became a striking embodiment of the victory of technique over strength.

The best “bronze legs” of the day

Russian athlete Pchelintseva Arina (56 kg) has demonstrated the excellent legs technique in the major fight. Execution of knee-wheels by women can be rarely seen in the international tournaments, especially if it concerns fighting for medals. Arina is a clear exception from this rule. Excellent execution of knee-wheel by Arina brought her 4 points on the scoreboard, and the following pursuit on the flour (locking) allowed her to defeat her opponent from Kazakhstan, Diana Dzhumabaeva ahead of time.

Sportsman Ardasher Umbayev (weight 52 kg, sports sambo) from Tajikistan perfectly conducted fight against the tournament host, Belarusian Maxim Krasinsky. Leading 2 points, 2 minutes prior to the end of the fight, he executed amplitude and rush throw through the back from the knees and was able to consolidate his advantage in this fight. And then, owing to the cartwheel, he put the winning point and won the bronze in this tournament.

4:59 on the scoreboard and "holding for two legs"

This fight of combat wrestles in 82 kg weight category was abundant in throws and strikes. 1 second before the end, the score was 8:5 in favor of Javlanbek Madaminov from Turkmenistan. Despite guaranteed victory, 1 second prior to end of the fight, Javlanbek conducted perfect 4-points throw with holding for two legs and finished this successful fight ahead of time.

Expert of the counterattacks and par terre

Mainly in the small finals of this day, the wrestlers tried to win in the attacks. The exception was counter-attacking tactics of Russian sportsman Aleksandr Tunakov, opponent of Belarusian athlete Alexey Sobol in weight category +100 kg. Fighting for bronze, Alexander demonstrated classical counterattack estimated in one point for back knee-wheel from back knee-wheel as well as not estimated stepping around which looked great from the lock by one leg. The submission hold for leg - infringement of the achilles tendon - put the winning point.