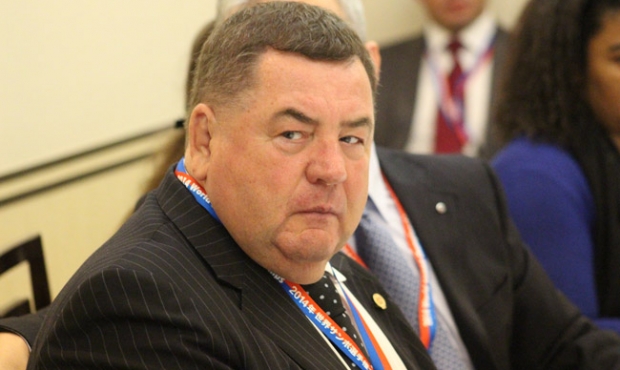 Today, athletes and coaches are training their spirit and body to get the optimal fighting form because the first competition day of the World Sambo Championship will start tomorrow in Narita (Japan). Organizers are completing the final preparations for the tournament, while the world sambo leaders have been gathered at the meeting of the FIAS Executive Committee to discuss the vital issues of world development and promotion of sambo and take necessary decisions to ensure that this development is carried out in the most optimal and organic way.

The meeting of the Executive Committee that was held today in Narita View Hotel began with the report of the FIAS President Vasily Shestakov. He stated the approximate number of participating countries which arrived in Japan for the global sambo forum this year – 82 countries. Shestakov noted, “This year which we conditionally called Asian became very successful. It so happened that the major sports events of the year took place on the Asian continent. The Youth Championship in Korea had a great success and, importantly, was widely covered by major Korean sports media. Recognition of sambo by the Olympic Council of Asia and the debut sambo tournament in the IV Asian Beach Games attended by athletes from 15 countries was also a great success of the Asian and world sambo. I am sure that during this World Championship in Narita we’ll witness a bright, interesting and well-organized sambo holiday.”

The FIAS Vice-President Sergey Eliseev reported at the meeting on the work of the FIAS Athletes’ Commission headed by Viktor Savinov (Ukraine). The Executive Committee decided to elect 2 more members of the commission – Veronika Kozlovskaya (Belarus) and Ashot Markaryan (Russia). The remaining 4 members (the number of commission’s members is planned to be increased to 7 persons) will be elected by means of the survey to be held among the athletes throughout the world. Sambo athletes will select 4 members who will represent their interests in the FIAS management among 6 candidates. They are: Maria Gedez (Venezuela), Sofian Khovashi (Tunisia), Laura Fournier (France), Ivana Yandrich (Serbia), Jakub Babiar (Slovakia) and Aurun-Erdene Batbayar (Mongolia).

The FIAS Sports Director Dmitry Maksimov presented to the members of the Executive Committee the pilot project of the FIAS’s sportswear passport which describes all the requirements for the sambo athlete’s outfit. The project was reviewed and unanimously approved by the decision of the FIAS Executive Committee.

The meeting of the FIAS Executive Committee as if followed the slogan of the World Sambo Championship proposed by the Japanese – “Simple, Compact and Hospitality”. It was like this – short, clear and rather compact. It’s rather obvious – in a few hours the delegates of the XXVI FIAS Congress will gather right here, in Narita View Hotel.

[Photogallery] OFFICIAL MESSAGE FROM NARITA: MEETING OF FIAS EXECUTIVE COMMITTEE
Share
Blog
Recent photos
Latest news
Recent videos
Latest news
Follow latest news You are subscribed!
Thank you! Your confirmation email has been sent to your email.
This website uses cookies to ensure you get the best experience on our website More info Got it!