Valery Rukhledev, the Olympian of the Century 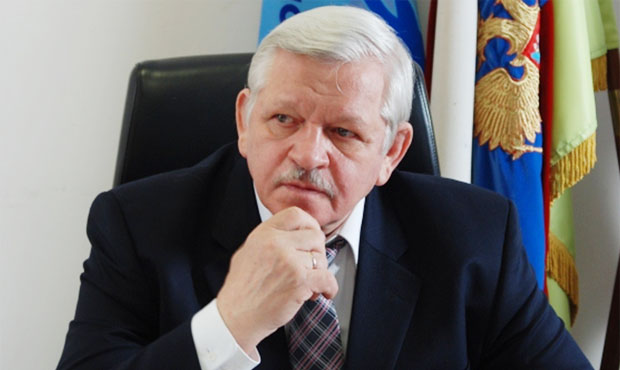 The hero of our story Valery Nikitich Rukhledev – is a multiple champion and medalist of the USSR, European and the World SAMBO and Judo Championships, as well as a six-time champion of the World Games for the Deaf (since 2001 – the Deaflympics) in freestyle and Greco-Roman wrestling. Valery Nikitich achieved high sports results, fighting for medals on a par with healthy athletes. He doesn’t want to know any losses both in life and in sports. His character is in insistence in achieving goals set and confidence in victory. These features of Valery Nikitich, a person hard of hearing, formed in a constant struggle for the right to be happy as all healthy people, have the same opportunities and productive life.

Valery Nikitich Rukhledev is a racy person, devoted to his sports movement The recent 2013 became not only the anniversary for him, but also very meaningful. He celebrated his 65-year anniversary, the 50th anniversary of his sports career, the 20th anniversary of the headship at the All-Russian Deaf Sports Federation and the 10th anniversary of the presidency at the head of the Russian Society of the Deaf (VOG). During his leadership at the VOG Valery Nikitich did a great job on the enforcement of persons with disabilities’ rights in Russia. Through his active support and energy, laws protecting the rights of people hard of hearing in the Russian Federation were passed.

- Valery Nikitich, how did you come to SAMBO?

- It happened in Odessa, when I was in boarding school. During my studies, I got acquainted with brothers Victor and Alexander Petukhov, who were fascinated by wrestling. They showed a number of holds and some tricks of hand-to-hand fighting that carried off my feet. I was struck by how, being a teenager yet, you can safely wrest down any big fellow. And it’s just a dream for boys to become strong. In the end, I go to a sports school and speak to the first coach with a request to take me to the section. But the answer that I receive is quite categorical: “We don’t accept guys hard of hearing, it is a difficult sport, and you will not succeed”. That’s where my I begin to display my character. 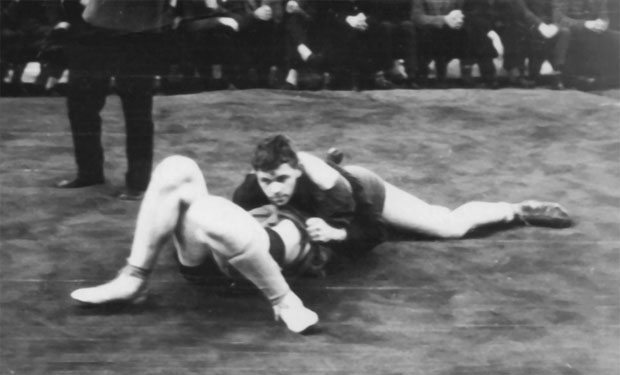 Valery Rukhledev wins a pinfall in SAMBO fight among the youth at the Ukrainian Championship. Odessa, 1964.

Anatoly Aleksandrovich Matyushenko becomes the third coach to whom I addressed a similar request. The first two turned me away at once offering to engage in a special section. They believed that there is no use to waste time for a deaf teenager. And there weren’t special sections at that time in the city. Later on Anatoly Aleksandrovich recalled my note with a smile, with which I came to him: “I am Valera Rukhledev, 14 year old. Deaf, I want to practice wrestling”.

Perseverance, fervent desire, insistence with which I didn’t just ask but cry for him to try to take me to train, at least for short while, melted the heart of the coach. Perhaps at the moment Anatoly didn’t think about big results or even about any sports achievements. But his heart told him that he should have taken me, and he took me to the section of SAMBO.

- In what sports society did you begin to perform?

- The first victories took place under the banner of the Spartak Sports Society. Performances on a par with normal athletes throw many colleagues a curveball: in the history of the sport athletes with such diagnosis haven’t come out on the mat. The fact is that the vestibular apparatus of a person hard of hearing is disturbed, causing the unstable body position in space, in addition you must fight on a par with hearing and professional athletes – notable and strong ones. Sometimes even I was surprised that I was so good at it. 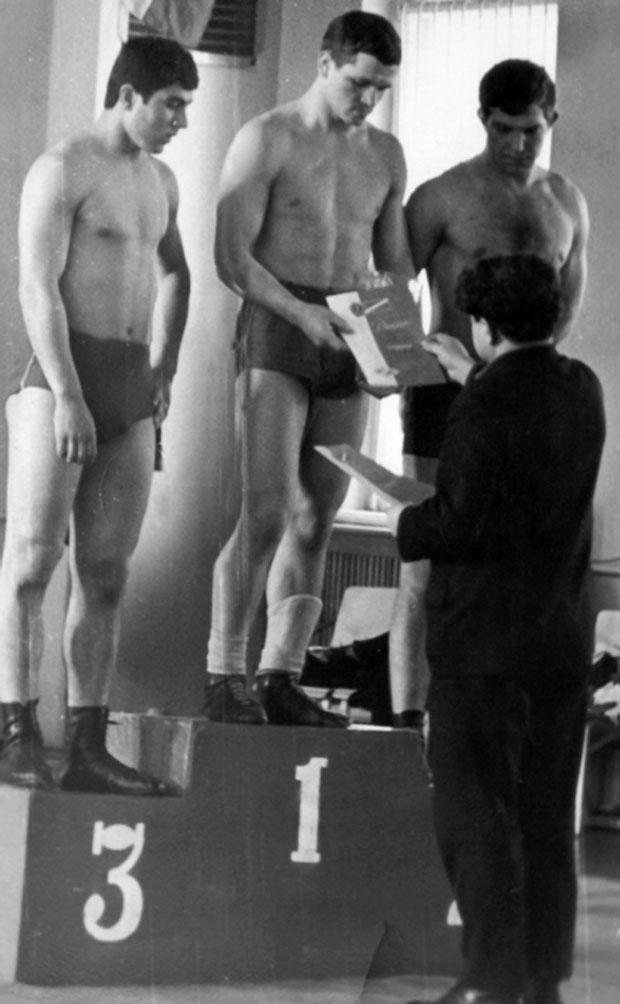 Probably, it was blissfulness, heaven-born – both the God and the fate gave him physical strength, as if compensating for hearing loss. Subsequently he achieves excellent results and great success in competitions at various levels. Another victory brings Valera Rukhledev a title of the Champion of the Ukraine. At age of 16 he performs a qualifying standard of the USSR Master of Sports in SAMBO. It happens on March 24, 1964 and becomes a memorable event, because at that time there was an incredibly complex qualifying system of candidates for this title.

- You have also performed in other sports, haven’t you?

- By the age of sixteen thanks to SAMBO I absorb a good technique of freestyle and classic wrestling, which allows, in its turn, to master such form of martial arts, like Judo, quickly. 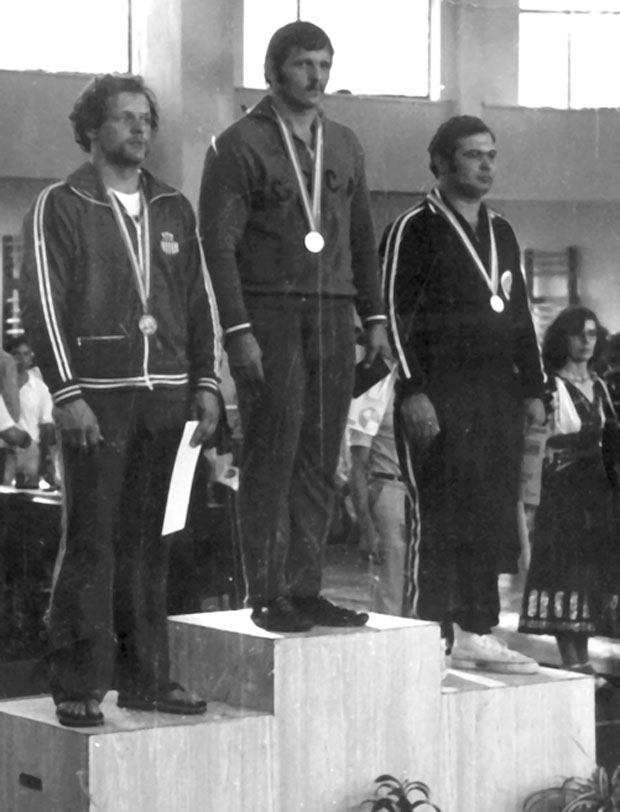 At that time in the Soviet Union over 100,000 athletes practiced this form of fighting, and it was not easy to enter the group of the strongest wrestlers of the USSR. But insistence still allowed to become the strongest in the sport. It was necessary to comprehend not only victory, but also to learn the bitterness of defeat. 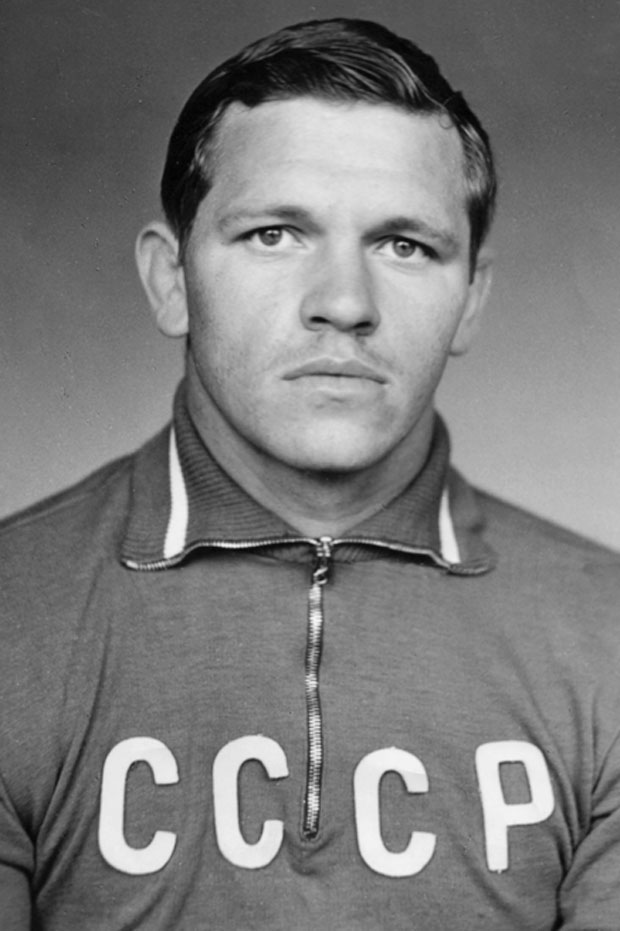 V.N.Rukhledev in the uniform of a member of SAMBO national team of the Soviet Union.

- And how did you find yourself in the Dynamo Society?

- In 1970 victories and sports successes led me to the Dynamo Sport Society, for which later on I performed for 8 years, having become a six-time champion in judo and SAMBO. In the Soviet system Dynamo Society was one of the strongest organisations, where staff from all law enforcement agencies trained, and, of course, it was more than honorable to become the champion of this Society in SAMBO and judo. Then it was thought that championships held by the Dynamo Sport Society were equal to the championships of the Soviet Union in the skill level and the participation of famous athletes.

At the Dynamo Society I began to work with a honoured coach Robert Samvelovich Babayants. Here a lot of athletes trained who later defended the honor of the country at the international competitions. Usually at training sessions they ran down the path that led from the stadium to the sea. Ten times downhill and uphill. Then played football and certainly – a sauna. Hence I love sauna for a lifetime.

Running on the path (V.Rukhledev is on your second right).

Babayants had a favorite saying: “Power is good, tactics is good but technique is better!”. He always noticed when his wards didn’t work hard on technique at the training session. “How many lifts did you do?” - was his usual question to athletes at each training session. 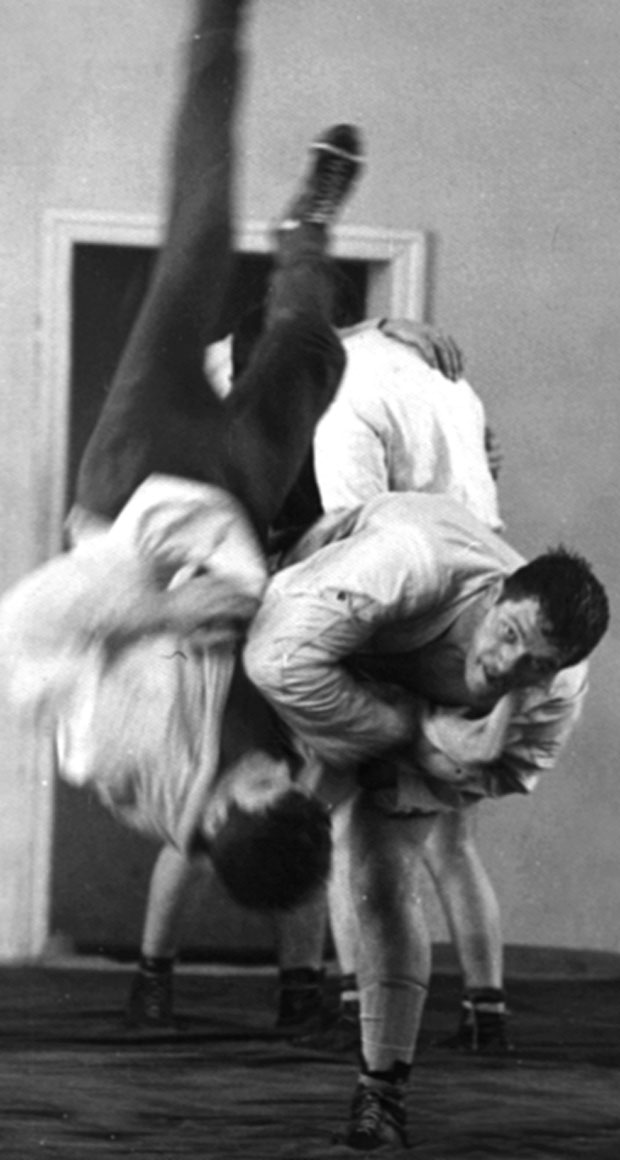 At that time two years of training sessions on the technique with Robert Samvelovich helped Valera literally to pull out victory at major SAMBO tournament from a four-time national champion Yevgeny Solodukhin. Solodukhin just fell across a “lift”. Rukhledev managed to conduct only one throw but Solodukhin didn’t manage to bring back the Ashes.

- Tell us about the most exciting bouts in your sports career.

Vladimir Nevzorov, an athlete, a member of the USSR SAMBO national team recalls this fight that went down in history of the Soviet sports:

- At the European Championship in the finals he met with a two-time world champion, famous Japanese wrestler – Nobuyuki Sato. Everybody warned Valery Nikitich: “See, be more attentive, see how he fights”. Sato has his famous thigh blocking turn, as it was called – “Sato’s thigh blocking turn”. Everybody knew about it and at either end of the country everybody had heard a lot about who is Sato. Valera, as always, only the “uh huh” and nodded his head.

The fight began. Valera jumped on the mat to fight with the opponent. In such a way, probably, in Spain, at the bullfighting, a bull jumps on a red cloth. Once on the ring, he ran at Sato – began, literally, to rip him up: both to the left and right. The fight was strong. Of course, the experience of the famous judoka was also evident. I vividly remember – he won Valery just in one movement.

Usually fighters of such a level when finish the fight, do not get tired, and sometimes come with the mat tripping. But in this case Sato barely got off the mat and constantly looked out of the corners of his eyes at Valera. I remember it very well. When we ran together with Valery at training session, I looked at this Sato as the God. And then he just looked at Valera in the same way and his eyes as if asking: “Where did you get this hogget?”.

- What are your future plans and prospects of SAMBO among the hearing impaired?

- Taking advantage of my position of the President of the ICSD and possibilities, I will do everything for SAMBO to become one of the sports of the deaf in Russia and appear in the program of the Deaflympics. We have recently submitted the appropriate documents to the Ministry of Sports and at the next ICSD Executive Committee will try to include SAMBO in the calendar of the international tournaments. 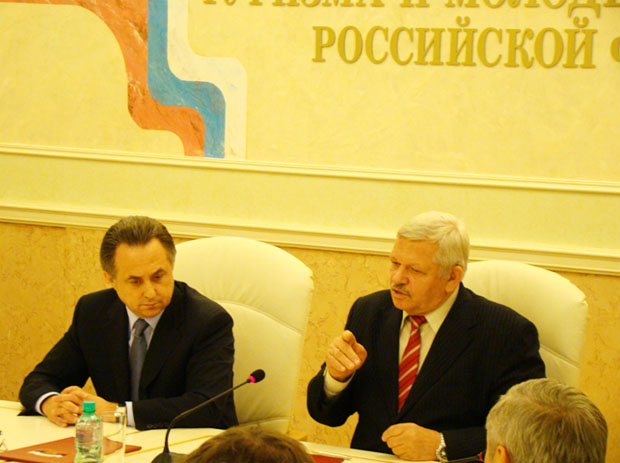 At the meeting in the Ministry of Sports of the Russian Federation.

In addition, now we have a lot of work to prepare for the winter Deaflympics which will be held in 2015 in Khanty-Mansiysk. I’m very active as a member of the Russian Federation Presidential Commission on Persons with Disabilities and the President of the All-Russian Federation of the Deaf Martial Arts.