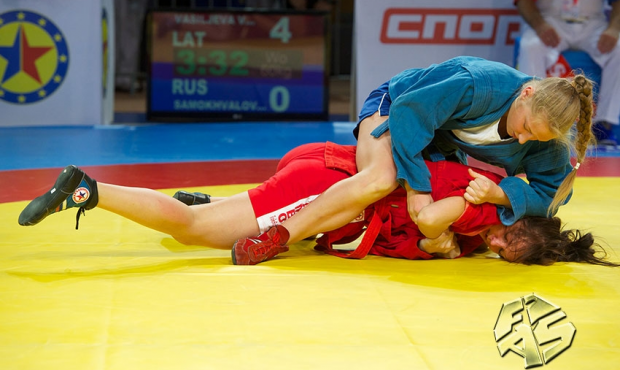 Here is our report on the second day of the Open European SAMBO Championship among Cadets right from the capital of Latvia. Go on and find out the details of a Belarusian gold throw 2 seconds before the match end, a Georgian two-time winner, a dramatic battle in the male 72 kg weight class, a USA dance of triumph, Romanian painful leg locks, and ups and downs of the national teams competition.

As the tournament has finished, two SAMBO cadets confirmed their leading statuses in Europe. Yesterday, a “two-time” prefix was added to the champion  title of Nikolae Foca from Moldova, 50 kg weight class; today, to the title of Jambuli Kurdiani from Georgia, 55 kg weight class. It is interesting to note that Jambuli Kuidiani overcame Bulgarian wrestler Bozhidar Temelkov with a score of 6:0 and, thus, precisely repeated the outcome of the final match with the same opponent at the last year’s cadet tournament in Tallinn, Estonia.

A throw of Belarusian Dzmitry Muzhaila which brought him gold in the 46 weight class was incredibly striking. Dzmitry Muzhaila was two points behind his Georgian counterpart Vakhtang Metelishvili when two seconds before the referee’s whistle he executed a 4-point overhead throw and snatched the victory. This was an amazing success as during the match Dzmitry was not just behind, but seemed to be unable to find tactical and technical clues to his rival. Having performed his gold throw, Muzhaila could not keep his emotions inside. The match-winning episode and moments of sportsman’s joy have become a real catch of the broadcasting team. And though Vakhtang has to content himself with silver, but we are sure that a thorough analysis of this one-second loss of attention will teach the wrestler a good lesson and help him to smelt the defeat into future achievements.

The day session of competition has brought into the spotlights a considered fight in parterre of Romanian Codrina Ionescu, 56 kg weight class. On the way to the final, Cordina overcame both of her opponents with painful leg locks, an Achilles’ ankle impingement and a knee lever. At the beginning of the match with Russian Ksenia Skarga, Codrina was focused and concentrated. For three minutes she was one point ahead her opponent.  Still, Ksenia was ready for a struggle and did not give Cordina a chance to demonstrate her mat wresting skills. In the end of the match, Ksenia recollected her forces and executed a throw with an inside grip on the same leg, that brought her one point and a gold medal. Cordina Ionescu added her silver to the Romanian haul where there are two bronze medals won by Orlando Gruia, 50 kg weight class, and Casandra Rusniac, 52 kg weight class.

It is worth mentioning that the second day of the open championship has brought two gold medals to non-European national teams, from Mongolia and the USA. While a Mongolian wrestler has been on the list of medallists after yesterday’s matches (Altantsetseg Batsukh, bronze, 52 kg weight class), gold gained by a USA SAMBO team member is their first award. The medal was won in the most prestigious weight category of over 84 kg by John Jayne who pitted against Veselin Ivanov from Bulgaria. Being lighter than his rival, the American sportsman led the struggle, putting the distance, moving around, counter-attacking Veselin’s holds, and performing his best acts, a leg snatch and a windmill throw. Such a fighting technique did the winning score and resulted into a medal. After the winner had been announced, John entertained the audience with a short lively dance that was met with the applause and numerous highlights on TV.

Maksim Annenkov from Russia, 78 kg weight class, has become another broadcasting star of the day. His winning throws, carried out in the final match against Yan Khalimon from Belarus, have received the highest praises of experts and visitors and have been repeated on screens in the breaks. His back leg-show, lateral drop, and a chest throw were executed with amplitude, strength, and excellence, and, as a result, we have enjoyed brilliant, solid, and spectacular final that has demonstrated the best of the wrestling in the standing position.

After the exciting matches and awarding ceremonies of the second day, the turn has come to announce the total scores of the national teams. The following are the results of the female team competition: Russia takes the first place; Ukraine, second; and Belarus, third. We would like also to distinguish the triumph of the female cadet team of Latvia that has won two silver medals and is ranked fourth, as well medals of the female SAMBO wrestlers from Mongolia, Estonia, Lithuania, and Belgium.

The results of the male team competition are: Russia is ranked first; Georgia, second; and Belarus, third.

We remind that the Open European SAMBO Championship among Cadets has gathered together SAMBO wrestlers from 19 countries of Europe, Asia, and America. Two days of competition has determined medallists from 14 cadet national teams.