The European Championship in Cyprus, the “sole and invincible”, one more painful hold of the Armenian SAMBO athletes and the team podium 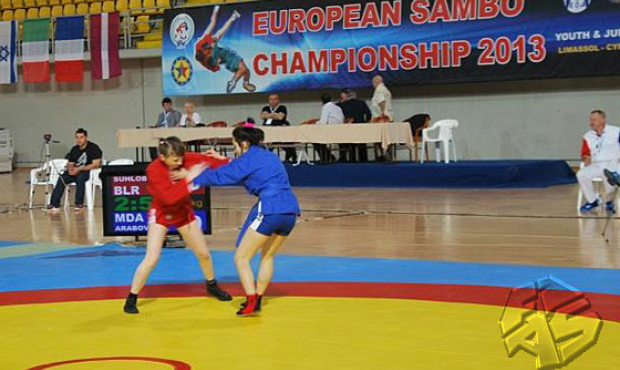 8:00 a.m. by Cyprus – the International SAMBO Federation TV crew under the leadership of Vladimir Ivanitsky leaves for Limassol to film the city views for the next issue of the FIAS TV-magazine. The old port, ancient Greek city of Amathus, beautiful churches and quiet lanes. You will be able to see it in our television magazine on the FIAS website very soon, as early as at the end of April. But, of course, its main topic will be SAMBO and in particular, the European SAMBO Championship among juniors, boys and girls in Limassol, where the final day of these exciting competitions among youth has been held today.

On the final third day of the European Championship the fighting, as in previous days, appeared to be bright and spectacular: with lots of throws and painful holds, as well as intrigues almost in every fight which is the audience so fond of. Unfortunately, today SAMBO fans failed to see intrigues in the weight category of 75 kg among girls. The fact is that the Russian girl Oksana Ruleva was the only one in this weight and in an easy state of my fellow commentator’s mind Mikhail Martynov we have named her the “sole and invincible”. Such situations are occasionally found in these age groups due to the fact that young women of such weight parameters are nothing less than not enough in Europe. So Irina’s medal is well-deserved. And we, in our turn, would like to wish the girls of 70 kg weight, approaching the age of 18, to eat more to create an adequate competition in the weight, so rare for the participants in future.

SAMBO judges were again pleased by the representative of the Armenian school – Edik Petrosyan who opposed the Russian Khas-Magomed Inderbiev in the final of 87 kg weight category among young men. Once again the Armenian SAMBO athlete put a period to the victory, having performed a mat painful hold, not typical for representatives of this SAMBO school. So there is one more Armenian successor of the glorious traditions of a mat holds fan Tutkhalyan.

The fighting, as we know, was not only among SAMBO athletes from 22 countries of the Old World.The fact is that there was a serious fighting at the team level. And the results of the team classification were announced just today. What do we have at the finish of three-day fighting?

Among young men: the Russians took the first stage of the podium, the Georgian SAMBO athletes follow them and the Ukrainian team closes the top three winners.

Among girls: the Russians were the best, the Belarusian team is on the second stage of the podium and the Ukrainian team won the bronze.

Among male juniors: the Georgian SAMBO athletes are the first in the rankings, the Russians are the second, the Ukrainian team won the bronze.

Among female juniors: the Russian team won the gold, the Ukrainian SAMBO athletes won the silver and the Belarusian team brought the bronze to their country.