European Championships among youth and juniors: results and new horizons 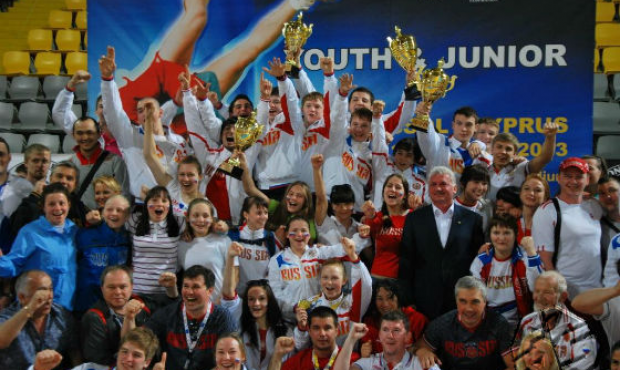 Yesterday European SAMBO Championship Among Juniors came to an end in Lemesos and the winners of the team total were awarded. The ceremony was colorful and emotional and full of medals, smiles and words. But in our today’s report there will be only words. The words of the officials related to the feast of the Junior SAMBO that was held in Cyprus those days.

Let’s start from the most important person at this tournament, from Marios Andreou, the torch bearer and organizer of the Championship, President of Cyprus SAMBO Federation: “Despite the crisis our Federation decided to hold the Continental SAMBO Championship in Lemesos by any means. And the Championship is coming to an end today. We are not going to rest on our laurels and we are ready to aim at even more outstanding events. It is necessary to create such conditions that the athletes join SAMBO and bring results. In this situation the International Sambo Federation helps Cyprian athletes very much. To be more exact, for European Championship it has allotted three wonderful mats that will remain here after the Championship. Young athletes will train on them. In difficult financial situation this help is sensible.”

Local authorities have also rendered assistance to Cyprian sambo athletes. The help was financial and moral, for example, Lemesos mayor Andreas Christou was present at the tournament. He visited not only the Opening Ceremony of the Championship but watched the bouts on sambo mats with great interest. He said: “The Championship is a very important event to us. I studied in the USSR and I know SAMBO. There are a lot of Russians in Cyprus, which should help the development of the sport in our country. We hope that the Cyprian youth that participated in European SAMBO Championship will become great athletes. Cyprus SAMBO Federation was officially acknowledged by the Cyprus Olympic Committee only 2 years ago. Our today’s athletes are debutants in the international arena. The representative of our country Marilena Pargkalou (56 kg) won the first medal (a bronze one) in the history of Junior SAMBO for her country at this Championship.”

Sergey Eliseev, Vice-President of the International Sambo Federation was happy for the Cyprian medal but as the Head of European SAMBO he wants those medals to be won by the representatives of different countries of the Old World. As far as the Championship in Cyprus is concerned, he said: “Honestly speaking, as the President of the European Sambo Federation I was worried about the organization of the Championship. Having arrived here, I saw that the organizers had tried to do everything possible to hold the tournament at the high level. Of course there were some problems, but just some everyday routine that is easy to cope with. Attention from local authorities was obvious from the fact that the Opening Ceremony of the Tournament was visited by the Minister of Sport and the Chief Magistrate. They made us sure that they are ready to render any kind of assistance in the process of SAMBO development in Cyprus.”

Sergey Tabakov, FIAS Executive Director is at one with Sergey Eliseev. It is not surprising as Marios Andreou studied and trained at Moscow Institute of Physical Culture and Sports under the charge of these two world famous SAMBO specialists. He said: “I am glad that new people appeared in our sambo team of specialists that are able to host events of such level. To my point of view, together with the competition on the mats there is some kind of competition among specialists – organizers of SAMBO tournaments. The most important is not the scores, goals and seconds, but the style, esthetics and taste…together with the competitions regulations (developed by FIAS) observance by the organizers. I am sure that everything turned out great for Marios and these parameters were observed by his team immaculately.”

As for us, we agree with Sergey Tabakov on the importance of SAMBO style and esthetics and we hope to enjoy it very soon at the European SAMBO Championship in Crema that will be held in Italy from May 17 to May 20.